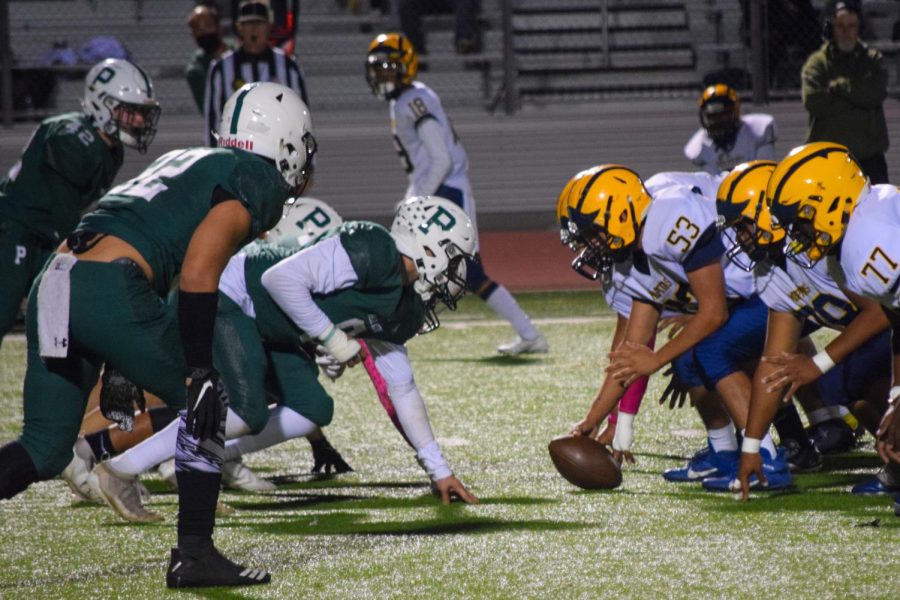 The Vikings line up at the line of scrimmage in Friday's senior night game win against Milpitas. According to head coach Nelson Gifford, he wanted the team to finish senior night with a win. "You want to be able to close it out for all the guys and for the work that they've done for the fans and for the community," Gifford said. "To play with the sort of effort that they did even though they didn't really have to play for 48 minutes, I mean it's special. It means more." (Photo: Benjamin Grimes)

In an emotional victory, the varsity boys’ football team (5-4) toppled the Milpitas Trojans (3-6), 20-17, on the Vikings’ senior night and last league home game.

Despite some big losses this season, including a devastating Homecoming collapse, the team was excited to go out and enjoy senior night, according to senior captain Brody Simison.

“We wanted to live in the moment, live in every play, just one step at a time,” Simison said. “And that’s just how we took this game.”

At the start of the first quarter, the Vikings quickly established a lead with a pass-and-catch touchdown by senior quarterback Danny Peters, bringing the score to 7-0 in the first eight minutes. From there, the Vikings continued to excel on the offensive, making various plays that kept them strong for the majority of the quarter. However, Milpitas managed to create an opening and score a touchdown towards the end of the quarter, which ended with a tied score of 7-7.

In the second quarter, the game turned into a back and forth struggle, with both teams being unable to gain significant yardage. Regardless, as the half came to a close, the Vikings prevailed, with Peters being especially dominant, throwing a long pass to wide receiver Ja’Meer Cooper to reach to the 20-yard line. He then managed to sprint to the end zone and secure a touchdown with 4 seconds left, closing out the half with a lead of 13-7.

Peters, having played football for the Vikings all four years, said his play on senior night was a testament to how far he has come as a player.

“My first year playing football, freshman year, I did not know what I was doing,” Peters said. “But I came in here and I relied on the coaches teaching me, and I’ve come a long way from that and I think that’s what I’m most proud of.”

In the second half, the Vikings kept their offensive persistence. Towards the end of the third quarter, a long pass from Peters to junior wide receiver Tommy Butler, who dashed to Milpitas’ end zone, enabled another touchdown, making the score 20-10.

Butler said he recognizes the importance of senior night to the seniors, which allowed him to step up his performance in the game.

“I’m doing this for my seniors out here,” Butler said. “I know how much this game means to them. As you can see a lot of seniors got really emotional after there was a heartfelt battle game. ”

The fourth quarter was nerve-racking for the Vikings, as the Trojans scored with less than 5 minutes left, making the score 20-17. However, a key interception by junior defensive back Amani Elfadil allowed the Vikings to stay in control for the remainder of the game, leaving the score unchanged.

According to Simison, great teamwork from the Vikings allowed them to come out on top in the second half.

“The team did well in playing as a family,” Simison said. “We all did our jobs, and no one did what they weren’t supposed to do.”

Head coach Nelson Gifford shared Simison’s sentiments, saying the intensity of the final minutes of the match was an indication of the collective strength of the team.

“That was probably one of the craziest four minutes of my life,” Gifford said. “It really just came down to, who’s gonna grit it out more, who’s gonna tough it out more, and to the credit of our guys, they just kept battling. There were plenty of opportunities where you could quit, or not give as much effort, but they [Vikings] didn’t, they just kept going and kept playing until the very end.”

Gifford said that the team this year was especially important to him.

“I mean, this senior class is special to me, because this was my freshman class when I got hired in 2018,” Gifford said. “All these guys were freshmen coming in … and so for them to stick through this process, and to finish out of seniors especially, it feels good. They don’t have to spend their time with me, they could easily go someplace else, but instead, they decided to hang out with me for four years and it’s pretty awesome.”

“It was a lot,” Peters said. “It was just tons of emotion. You know, even before the game [started] when we came out here to the whole senior night [events], I was already on the verge of tears. I mean, I’ve had so many memories here.”

Gifford said that although seeing the seniors leave is bittersweet, he has hope for the future of the team, namely the freshman, sophomores, and juniors who will replace the seniors.

“They’ve also seen the importance of that senior leadership, of what it means to be a role model, particularly when things are not going well,” Gifford said. “I think they’re just getting just a whole bunch of lessons in a very short period of time which is awesome.”

The Vikings play next against the Wilcox Chargers (5-4), at 7 p.m. Friday at Wilcox.