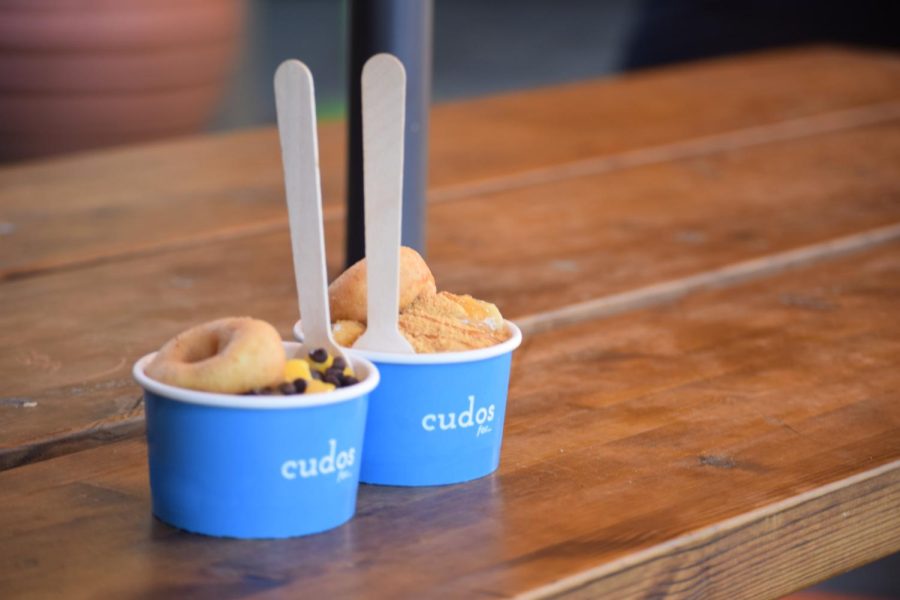 The newest store across the street from Palo Alto High School, Cudos, sells a combination of frozen custard and mini donuts. The founding couple said they started their restaurant since they find it better than ice cream. "Think of soft serve, but softer, and ice cream, but softer," founder Hansel King-Lynn said. (Photo: Brennen Ho)

Cudos, a portmanteau of the words “custard” and “donuts,” was founded by couple Lisa and Hansel King-Lynn and opened early August. According to Lisa King-Lynn, they chose custard because it has a different taste and texture than ice cream.

“Frozen custard basically is like ice cream but it’s got egg yolk in it,” she said. “It’s got a certain amount of egg yolk where you can call it frozen custard, and it makes it creamier.”

Lisa King-Lynn also said that the methods used to create custard lend to its unique properties.

“The machines that are used to make frozen custard whip less air into it so you don’t get air pockets or ice,” she said.

According to Hansel King-Lynn, the idea of frozen custard was inspired by his college experience.

“I went to school in St. Louis, and there was a famous frozen custard place called Ted Drewes,” he said. “I hadn’t seen frozen custard here on the West Coast, and I realized that I kept getting frozen custard when I was out in the midwest, so I decided, why not give it a shot here as well.”

Despite this, the couple said they have encountered numerous challenges in starting their restaurant. According to Lisa King-Lynn, the global supply chain issue presented problems in getting Cudos’ machinery and production up and running.

“One example was cups — we ordered them in early June, and we were planning to open in August, and we didn’t have them in time for opening,” she said. “We had to buy generic plain cups when we first opened. Also, our equipment: We were hoping to open in the early summer, but there was a delay in getting the machine built.”

Thankfully for Cudos, the supply chain problem didn’t impact the shipping of the ingredients themselves. The couple said the ovens arrived just in time, before a backlog in demand that would have forced them to wait until October.

They added that the unique nature of the restaurant industry posed a series of new challenges, which they were unprepared for after starting up another business, The Coder School.

“When you do something like this, you always have to be ‘on,’” Hansel King-Lynn said. “So somebody comes in the doors — ‘Hey, how you doing?’ You know, you gotta do that thing, right? You have to get that relationship. And that kind of takes some energy.”

The Paly Voice tasted two recommendations from the King-Lynn couple: the Mango-Bango and the Banana Foster.

The Mango-Bango was a cup of frozen custard with diced mangos, a drizzle of banana syrup, and chocolate chips sprinkled over the top. While I didn’t go in expecting much, the Mango-Bango was a surprisingly refreshing combination that I wouldn’t have traditionally eaten. The frozen custard was a type of snack that I had never tried before, and the sweetness of the mango perfectly complemented it. The chocolate chips provided a nice change in texture, providing a satisfying chew to the snack. The mini-donut, however, did not add very much, as it lacked flavor, and just provided something to chew.

The banana foster was a cup of frozen custard with banana slices and caramel mixed in, with graham crackers sprinkled on top. The biggest critique I had for this was the small serving size. While Brennen thought it was worth the price, I personally think the small quantity is simply not enough bang for your buck, especially since it’s priced at $5.50. The frozen custard had a very similar texture to ice cream — it was creamier than typical ice cream, but the difference was just barely noticeable. The difference was not noteworthy enough to create enough of a distinction between the custard and other frozen dessert options. I thoroughly enjoyed the mini donut, though, as it added a nice touch to the snack that made it unique compared to most desserts.