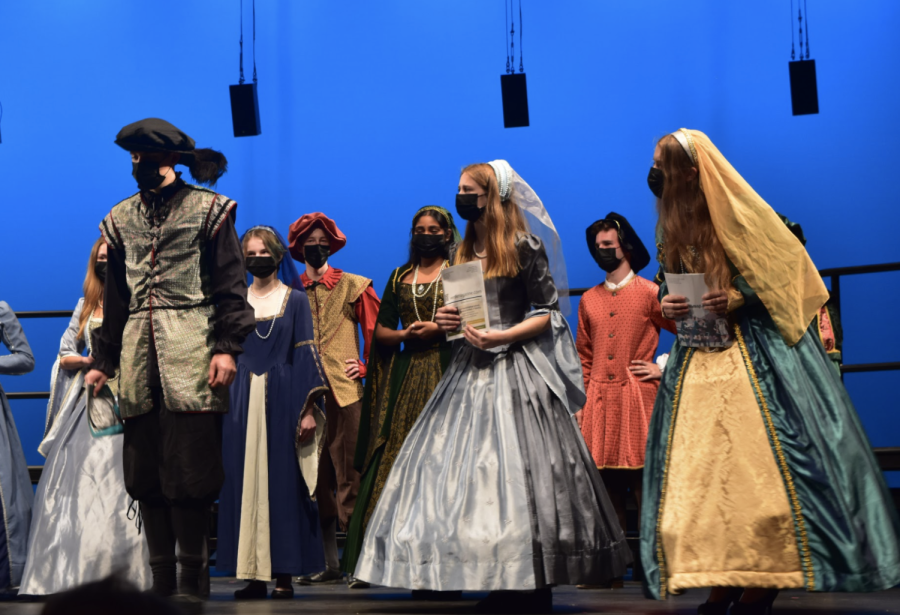 Palo Alto High School’s Madrigals Choir performs a skit during the fall concert last Friday. Wearing an authentic madrigals dress, Senior Cate Dyer walks to the front of the stage holding a magazine as she preludes the next song they will perform. "It's so fun putting on these fun dresses, though I get nervous I might trip when I walk in them," Dyer said. (Photo: Maia Johnsson)

After over a year and a half of virtual performances, all Palo Alto High School Choirs returned to in-person performances with their fall concert at the Performing Arts Center on Friday.

The Fall Concert showcased the Paly choir groups including Madrigals, Concert Choir, Freshman Choir, and various acapella groups. Choir Director Michael Najar said he was excited about being back in the PAC performing for a real audience.

Sophomore alto Victoria Eberle said the pandemic was a barrier to her improvement as a singer but she was happy to be back.

“It [the pandemic] definitely slowed me down and slowed my improvement down, but now that I’m back I’m very happy to be singing again,” Eberle said.

According to Eberle, seeing the audience in person made the concert more enjoyable.

“It’s super exciting to have an audience and to have people clapping and to get all dressed up, because I haven’t had this kind of experience in almost two years,” Eberle said.

Choir singers had difficulties hearing each other over Zoom, according to freshman Jonah Marquart, who said that hearing other choir members in-person helped him sing more in tune with others.

“It makes it quite enjoyable when there are other people around to actually blend your voice [with] because then you can actually really feel what’s going on instead of just listening to yourself over and over again,” Marquart said.

Najar said that showcasing all of the Paly choirs at the concert makes singing in choir meaningful.

“Sounds, singing, it’s truly a gift and we’re happy to show it,” Najar said. “It was so nice seeing all the students connect on stage.”

The next concert features the Madrigal Choirs in their Madrigals Feast concert on Dec. 4.