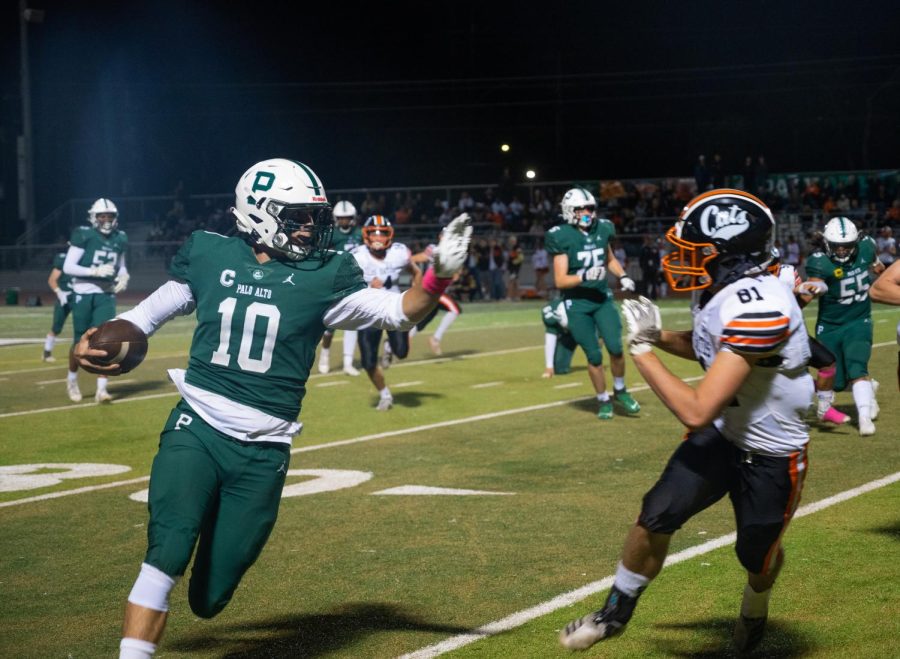 Viking senior quarterback Danny Peters runs past a Wildcat defender in Friday night's 0-49 homecoming game loss against Los Gatos. Peters said that the Vikings’ lack of teamwork was a major factor in their loss. “Everyone should have been thinking together as a team and I think that's just what should have happened,” Peters said. “And today, [it] was not — it was all individual stuff and we all got in our own heads and it just didn't work out.” (Photo: Jonathan Chen)

In one of the most anticipated games of the season, the Palo Alto High School varsity football team (3-4) suffered a crushing 0-49 defeat to the Los Gatos Wildcats (8-0) at its first homecoming game in two years.

Both players and fans were excited for the annual homecoming game at the end of Spirit Week after it was canceled last year due to the COVID-19 pandemic. According to senior captain and wide receiver Brody Simison, even after undergoing such a severe loss, the energy the game brought was pleasing to see.

“It was good to be back,” Simison said. “It feels good to have that many people in attendance, and it honestly really helped motivate the team.”

Despite Los Gatos being undefeated and holding first place in the DeAnza division, senior captain and quarterback Danny Peters had hope coming into the game, although that hope diminished as the game began.

“I came here wanting to win,” Peters said. “But I think you could tell from the get-go [that] everyone seemed kind of intimidated. I believe that kind of set up our team for what happened.”

Besides the lack of confidence from the Vikings, health concerns also posed as a challenge for the team. Los Gatos was especially aggressive during the entirety of the game, resulting in several injuries. An ambulance was even called to the field after a head injury to wide receiver Blake Chase after an incomplete pass late in the second quarter.

Head Coach Nelson Gifford said that despite these struggles, the team showed heart in the face of adversity.

“The positive that I took away from it [the game] is we saw a lot of guys really step up in the face of really tough challenges,” Gifford said. “That’s something that football can do. When you’re faced with a really strong opponent and you know someone across who’s really tough, you can really start to see the character of people, and see the guys that are going to step up and grit it out.”

In the first half of the game, the Vikings quickly fell behind after Wildcat running back Emiliano Mejia scored two consecutive touchdowns while the Vikings struggled to gain yards.

Despite some promising moments from the Vikings in the early stages of the game, they struggled on offense. Aside from a few plays by wide receiver Ja’meer Cooper, the Vikings made little progress towards the opponents’ end zone.

Momentum from the Wildcats only increased from there as the game progressed, including an interception late into the second quarter. The Wildcats continued to dominate the first half, ending with a score of 0-28.

Halftime allowed the Vikings to revitalize their spirit through float presentations, the senior class dance, and performances from the Paly varsity cheer and dance teams.

Junior Cindy Wang said that the events at halftime were welcoming to see after being gone since before the pandemic.

“It feels really good to be back after two years,” Wang said. “It was really fun and exciting and I liked all that energy.”

The second half of the game kicked off with another early touchdown from Los Gatos. The Vikings managed to gain a significant amount of yardage with a few plays, including an impressive 30-yard run by Simison, but were unable to carry through and score.

Regardless of the team’s performance in the game, the energy from the crowd remained high, which was one positive aspect, Gifford said.

“We obviously had a lot of students here make noise,” Gifford said. “It’s really nice that after two years away it’s feeling more and more normal. You still have masks and all that, but we’re getting back to those pre-pandemic days.”

Many underclassmen also had an enjoyable experience at their first homecoming football game through crowd chants and school spirit.

“There was a lot of spirit which was really fun,” freshman Sanjana Adatra said. “It [the defeat] was kind of sad because it was our freshmen and sophomore’s first homecoming game, but I think that we still killed it with our cheers.”

Despite the devastating defeat, fans including sophomore Hector Barboso expressed hope for the future.

“It was tough to lose like that, especially during homecoming,” Barboso said. “But, I know that the boys are going to come back and they’re going to be strong,”

Gifford said overall he enjoyed being able to go out with his team tonight, win or lose.

“The outcome obviously isn’t anywhere near what we want it to be,” Gifford said. “But it’s always a privilege to be able to go out there, coach these guys, and be with them.”

Additional reporting for this story provided by Daniel Garepis-Holland and Jonathan Chen.