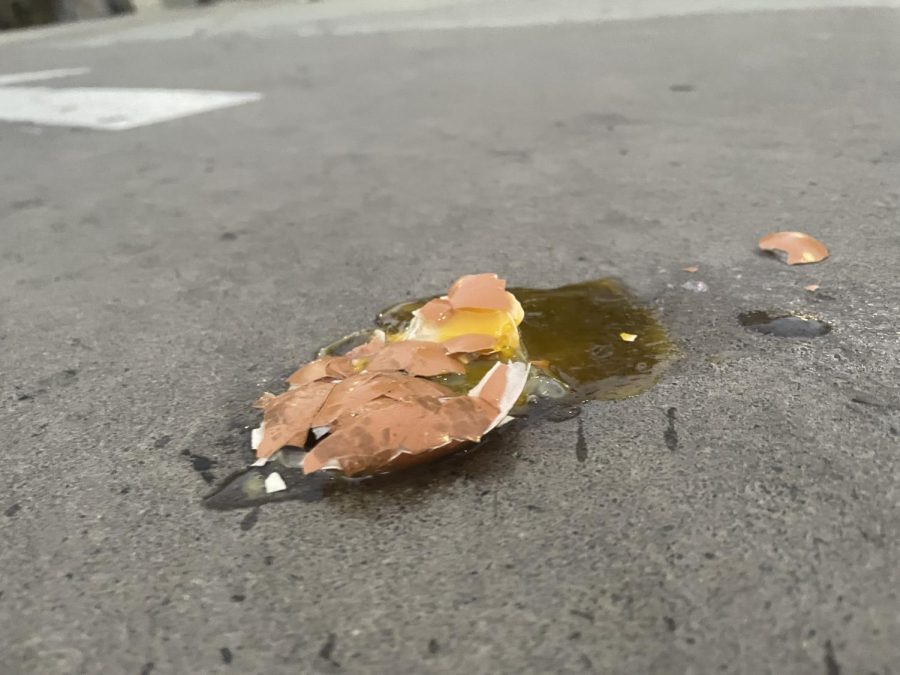 After an eventful night of smashed eggs covering neighborhood parks and residents’ cars, and homes, Palo Alto High School students returned to the main location of the mayhem and cleaned after an incentive was introduced by Associated Student Body and Paly Administration.

According to ASB director Steven Gallagher, the school now has to pay thousands of dollars in damages for yesterday’s activity and the events of last night have tarnished the Paly student reputation.

As opposed to the punitive approach taken by administrators after a similar egg fight incident in 2009 — when the school announced over 100 suspensions, prompting a Tower Building sit-in protest — a reward  was announced for students to clean up after Gallagher gave a stern lecture to students during the lunch rally on Thursday.

“After school today we will be hosting a clean up at Peers Park to help the area around and show the good Paly image,” Gallagher said at the lunch rally.

Although the cleanup was set for after school, many students with free periods following the lunch rally took it upon themselves to clean up Peers Park, the center location for the event. One student, Junior Isabelle Jacobi, did so during her free 3rd period on Thursday.

“Seeing what happened last night made me really sad and disappointed in our class,” Jacobi said. “I’ve talked with a lot of juniors today and they all told me we’re going to repair our reputation and make sure everyone knows what our class is all about — caring for our community.”

Jacobi said that by cleaning up, many students hoped they could help to repair the reputation of the overall student body. The communal morals of Paly needed to be highlighted for all Palo Alto residents to know that events like this will not happen again, Jacobi said.

To originally incentivize the cleanup, additional float-building time was granted to classes that had at least 10-15 students participate in the after-school cleanup efforts.

Due to the approximate total of 50 students who attended the afternoon cleanup, Gallagher announced all classes would have an additional 45 minutes past the 7:15 p.m. Thursday night stop time to work on their floats.

For classes who are falling behind in float-building, today’s cleanup opportunity was important for both Spirit Week points and repairing community relationships.

“This is crazy, someone damaged his [her boyfriend’s] car and removed letters from the car logo, which is also dirty from eggs,” Ambro said on Nextdoor. “I think they scratched it.”

Gallagher said that ASB considered cancelling the Thursday rally, but decided against the punishment.

“It’s disrespectful to the community and I think that people shouldn’t do it [egg wars], but I’m not going to ruin Spirit Week for the other grades who didn’t participate in it,” Gallagher said.

With the cleanup today, Gallagher said he hopes the Paly community can refocus on a more positive future.

“I would hope we can move forward positively,” Gallagher said. “We can’t do anything about the past right now, we can only figure out how to move forward in a positive way.”

As a result of last night, Gallagher said there will be point deductions made to both the junior and senior spirit scores — the exact number is to be released at the end of this week.