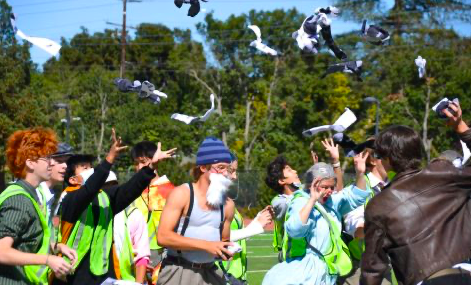 Administrators worked to tamp down competition and tension between juniors and seniors Thursday at Palo Alto High School after taunts and egg-throwing overshadowed games and cheers at the fourth rally of Spirit Week.

At least two frozen eggs were thrown from the junior section of the bleachers at the lunch rally, hitting at least one senior, according to senior Maia Johnsson, a member of The Paly Voice staff.

“They [some juniors] brought eggs to the rally,” junior Jennifer Mori said. “That was just taking it too far.”

Seniors were upset with how the juniors carried over Wednesday night’s egg wars rivalry into today’s rally.

“At the rally, that [throwing eggs] is dangerous, and I think that there’s a lot of hate on seniors because we’re supposed to be the role models,” senior Anique Dittrich said.

The junior class took part in stealing the senior class flag Wednesday night, according to multiple sources, which sparked accusatory and taunting chants at Thursday’s lunch rally. Juniors began chanting “Where’s your flag?” at the seniors while seniors responded with demands for juniors to return the flag.

The flag has since been returned to seniors during third period on Thursday after a personal intervention by Assistant Principal Jerry Berkson, according to ASB Treasurer Vivian Trach.

The competitiveness between upperclassmen during the lunch rallies has become a point of contention during Spirit Week.

“I thought it [the rally] was pretty fun, but we [juniors and seniors] may have been a little bit too competitive, “junior Tess Bowen said.   “Everyone’s just booing,”

Dittrich said she was disappointed with how juniors were acting towards seniors.

“It was not cool of the juniors to steal our flag,” Dittrich said.

The rivalry between the upperclassmen during this event and during Thursday’s rally created a negative image of Paly among the Palo Alto community, according to Gallagher.

Despite the drama, normal lunch rally activities still took place. Seniors and freshmen competed against juniors and sophomores in a field game called “Clean Your Room.”

More positive chants such as “We got spirit!” traveled throughout the bleachers during the spirit activity, and seniors and freshmen ended up defeating the juniors and sophomores.

During Friday’s lunch and after-school rallies, floats will be revealed, students will present their class dances and more points will be awarded for games and costumes.