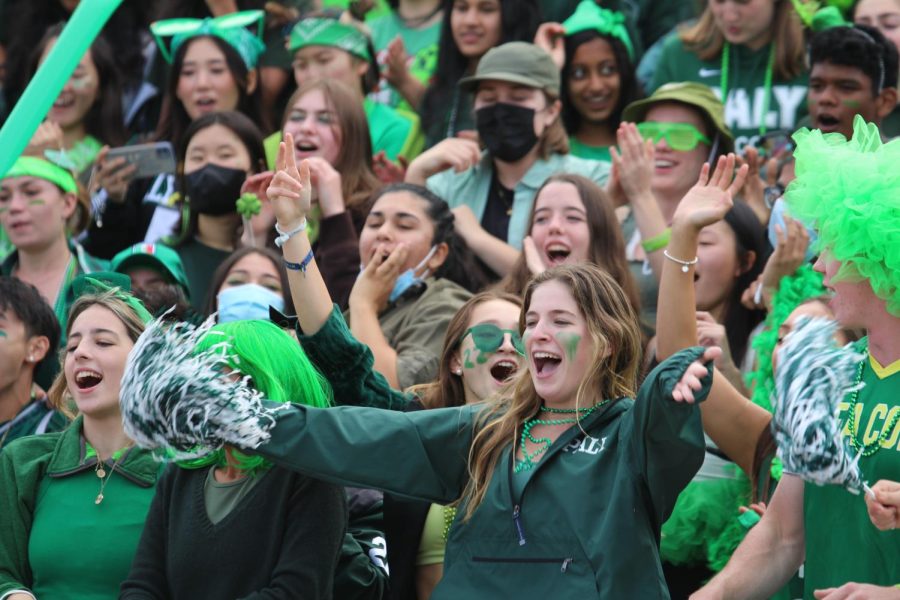 After the third day of Palo Alto High School’s Spirit Week, rankings remain unchanged with seniors leading at 7977 points, juniors at 6669, freshmen at 6014, and sophomores at 5383, with seniors winning the day’s rally game, Giant Cornhole.

At the end of an unconventional day of PSATs, no classes, and a double PRIME session, hundreds of colorfully clad students crowded the bleachers Wednesday to cheer for their grade as part of the annual school Spirit Week. For this rally, students dressed up in their grade’s respective colors and competed in a game of Giant Cornhole.

After nearly two years without a Spirit Week at Palo Alto High School due to virtual learning during the COVID-19 pandemic, Principal Brent Kline said he enjoyed watching the school spirit at Wednesday’s rally.

“It [the best part of Spirit Week] is seeing everyone together, that’s it for me,” Kline said.

Riding a victory over the sophomores from Tuesday’s Paly trivia competition, the freshmen remained optimistic about their chances on Wednesday.

“I’m surprised [about beating the sophomores],” freshman Chantal Herath said. “I didn’t think we’d do that. I hope we can keep our position above the sophomores.”

According to sophomore Izzy Stone, the unprecedented third-place victory of the freshmen could be attributed to the sophomores’ lack of Spirit Week experience.

“It’s not that surprising, because none of us had any of this last year,” Stone said.

The freshmen held their dominance, pulling ahead of the sophomore class again in Wednesday’s Giant Cornhole game. However, not all sophomores were deterred by their loss.

“We [sophomores] had a lot more spirit than normal and I think we really showed what we can do,” sophomore Clare Antonow said.

In the green sea of the senior stands, many were enjoying their success in Spirit Week games. The seniors have won every game this week so far and remain confident in their chances, as they have historically triumphed over all grades during Spirit Week.

“Today’s rally was very spirited,” senior Cynthia Zhang said. “There was a lot of jumping and yelling. I’m proud that seniors won. It’s our last year here, so I want to make the most of it.”

Some seniors dismissed the juniors altogether as competitors.

“They [the juniors] are not competition for us,” senior Isabella Jones said.

“It might’ve been a bit discouraging for people, probably not as much hype as the other games,” Seah said.

Overall, though, Seah was pleased with the turnout, especially for an after-school rally, where students are able to leave school altogether and not attend the rally if they choose, as attendance is not taken.

Although the sophomores may trail the freshmen in total points, they broke their losing streak when they tied with the sophomores in the Giant Cornhole competition, although they finished ahead of the juniors. Competitors tried to throw pillows into a hole on a large tarp held up by other students.

“I think considering the first few days it [a sophomore victory] seems pretty unlikely, but after today I’m pretty confident in us,” Antonow said.

Freshmen and sophomores may have tied today’s game, but freshman maintained their lead over sophomores in total points gained. Freshman Joshua Wang said he is enjoying his grade’s success.

“It feels pretty nice [to beat the sophomores],” Wang said. “It was nice to see us moving up.”

The freshmen and sophomores will face off again at the Friday rally. If the sophomores remain in fourth place, they will become the first Paly class of sophomores to score behind the freshmen in over a decade, according to the ASB website.