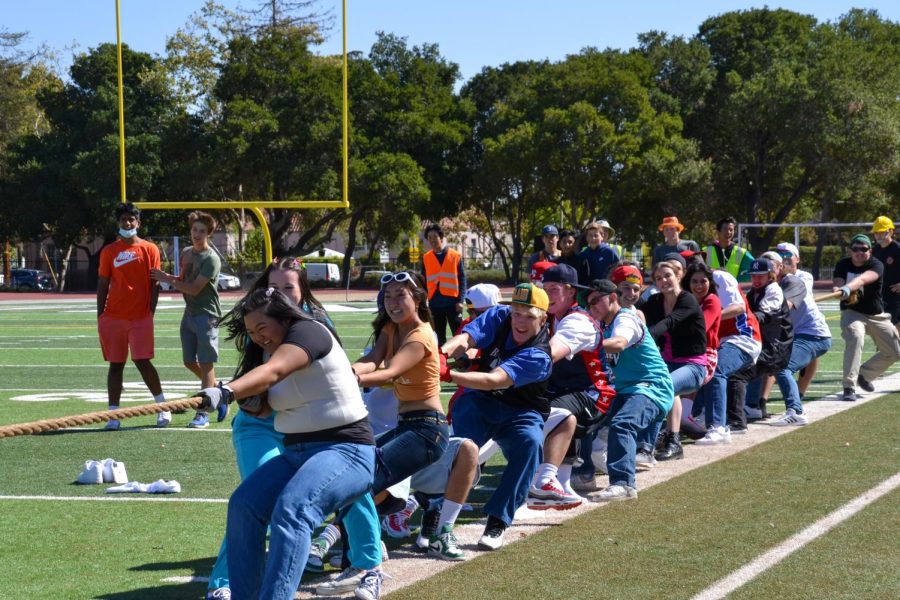 After a year without rallies for Palo Alto High School due to the pandemic, students were excited to assemble on the football field bleachers on Monday during lunch to kick off Spirit Week 2021.

Building off of spirit points earned both in the opening days of the semester and during the first rally, seniors remain in first place with a total of 5662 spirit points, juniors follow in second place with 4689 points, freshman with 3992 points, and sophomores in last with 3589 points.

“Spirit Week is a very fun time of the school year,” Wong said. “It really allows students and staff members to come together and realize that school can be more than learning all the time.”

Wong also participated in the Spirit Week activity — a tug-of-war tournament. However, he said there were some major disadvantages pinned against the freshmen when going up against the seniors and suffering a major defeat.

“I thought it [tug-of-war] was super fun, but really unfair,” Wong said, “We were up against the 6’2 ” seniors that were super muscular, but it was overall a super fun and great experience.”

Although freshmen are the newest addition to the Paly community, the sophomores are also participating in their first Spirit Week. Sophomore Elsie Parigi said she, along with many others, was disheartened when last year’s Spirit Week was canceled during virtual learning.

“My entire class has never participated in Spirit Week before, so we just missed our first-time experience with so many fun things,” Parigi said.

Similar to Wong, Parigi said the rally and the great amount of spirit present among the Paly community now have her looking forward to the remainder of the week.

“These events also just show how Paly can really come together and support each other by showing school spirit,” Parigi said.

Parigi and the sophomores were victorious over the freshmen in tug-of-war, yet were defeated by the junior class.

Junior Katie McCluskey said she was happy to see how well the rally and spirit activities went.

“The rally went really well for it being our first one in two years,” McCluskey said. “I was on the field doing the tug-of-war, which was super fun, but the cheers in the bleachers were also going well.”

McCluskey said she hopes more people can participate in dressing up and attending the upcoming rallies.

“People dressing up and getting pumped and being positive just makes everyone happier and Spirit Week more enjoyable,” McCluskey said.

Although the juniors emerged victorious out of their tug-of-war battle against the sophomores, they then grappled with the seniors, who ended up with the win.

Senior Ruthie Roach was happy with the outcome of the rally and number of participants.

“Personally, I think Spirit Week brings people together who don’t usually talk or hang out, and we didn’t get to have that during online school,” Roach said. “Events like these can grow friendships and closer bonds with people in your grade.”

As this was one of the final few rallies for the senior class, Roach had advice for the freshman and sophomore classes.

“I know for underclassmen it may seem awkward to dress up — or even cheer — just because spirit events in middle school are nothing compared to what Paly has to offer,” Roach said. “But I would advise all of them to just go all out and try their best to have fun.”