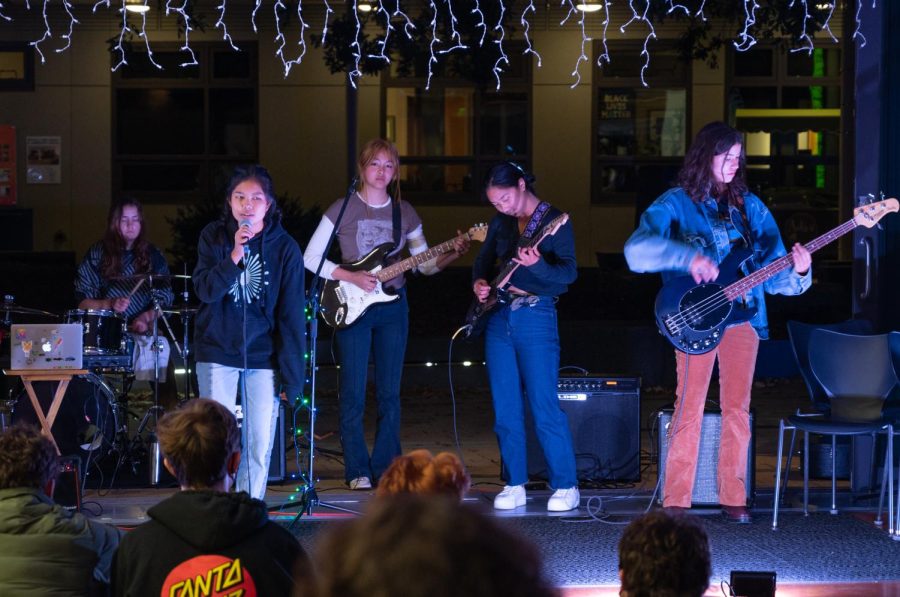 Palo Alto’s Teen Arts Council is once again hosting in-person events after a virtual year, starting with the open mic night that brought audience members to their feet.

TAC is a city-wide organization that holds events such as last week’s open mic night to give student performers all around the Bay Area a place to hang out and perform for one another.

TAC President Nila-Ann Nag, a Palo Alto High School senior said that although most of TAC’s audience is from Paly, she hopes it can expand to a wider audience.

“We’ve been trying to get more people from other schools,” Nag said. “We just want to give teens a place to hang out and be able to talk and hang out.”

After emceeing the night, Nag said she was excited to see how great the turnout was for the audience and the 30 or so students who performed.

Tara He, senior bass player for the newly formed Paly band, Sun Bear, said she was inspired by past Paly bands to perform and hopes Sun Bear can do the same for others.

​​“Freshman year I used to watch Oscar’s band,” He said. “It was really cool to be able to play with friends and I hope other people will start playing together with their friends too.”

Although He said she was nervous about Sun Bear’s first live performance, the environment provided by TAC was very welcoming and made performing much easier.

“I feel really great actually,” He said after the show. “It [performing] is a huge adrenaline rush for me and it was great having so many people being really hyped about our music.”

Senior Charlotte Noroian — guitarist, keyboard player, and singer for the band, said this event gave the band the audience exposure they needed to continue to play live more often.

“Tara was just showing me how we just got 10 new followers [on the band’s Instagram, @sunbeartheband] from this event,” Noroian said. “I think it’d be cool to get our name out so that if anything else comes up people can ask us to.”

Junior Rebecca Helft echoed that TAC gives all of its performers a safe space to perform without fear of judgment.

“I specifically chose to perform at this open mic because it’s such a safe environment where I can do what I love,” Helft said.

Being the first in-person open mic night in two years, Helft said she missed the opportunity to partake in events like this over the pandemic.

​​”Not performing in front of a live audience during the pandemic felt really weird,” Helft said, “Although there were other opportunities to do it over Zoom, it’s not the same because you don’t get the same energy from the audience.”

Erin Brady, a Paly junior, said she shared Helft’s experience of the pandemic having taken a toll on her ability to do what she enjoys most. After not doing stand-up comedy for nearly two years, Brady said she was itching to get back on stage.

“Freshman year I wrote funny poetry for a poetry night and everyone told me I was funny so I decided to take a risk and start doing stand-up,” Brady said. “But then the pandemic hit and I wasn’t able to perform for the longest time, but now I am so grateful to be back [on stage].”

Brady said TAC has helped her to continue to do stand-up, which is something she said she started doing as a way to get to know more people within the Bay Area.

“I hope I can encourage more people to do standup and to just get up onstage and enjoy themselves,” Brady said.