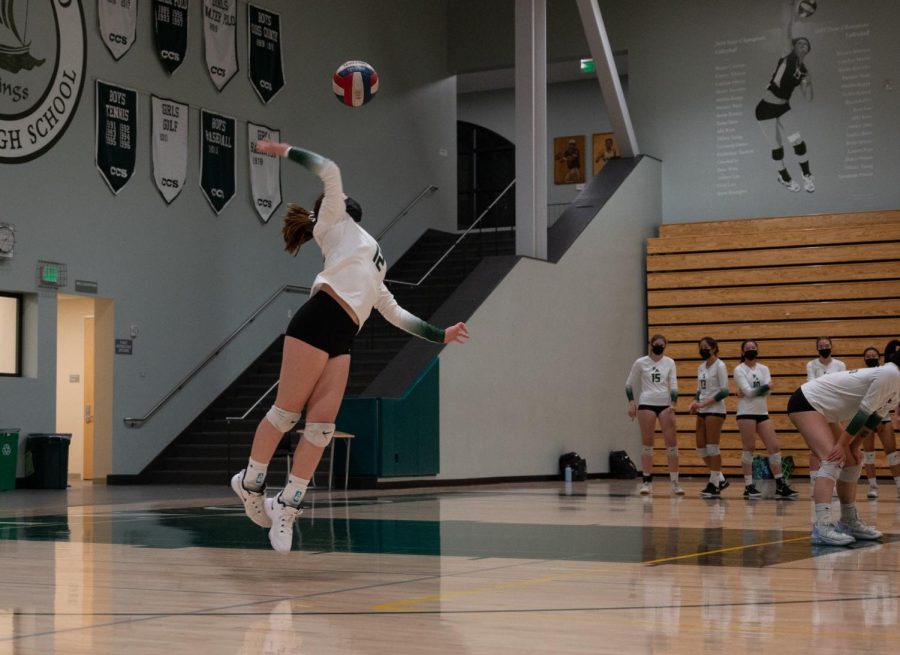 In a significant victory, the Palo Alto High School girl’s varsity volleyball team (12-7) beat the Homestead Mustangs (2-10), 3-0, Thursday night, bringing the Vikings back up to third place in the DeAnza League.

After coming off losses to both Mountain View and Los Gatos high schools, dropping them down to 4th place, the Vikings came into Thursday’s match with intentions of redeeming themselves, according to junior libero Jess Watanabe.

“We wanted to come back strong and wanted to be loud and not let our losses get in the way of how we play,” Watanabe said.

In the first set, the Vikings found their rhythm early on, earning multiple points throughout the first couple minutes with strong offensive kills and blocks. The same momentum was taken through the rest of the match, eventually giving the Vikings the win, 25-16.

Senior blocker Olivia Harrison was especially powerful in the first set, contributing various points through her intense slams that overwhelmed the Mustangs’ defense. Harrison said she wanted to bring a lot of energy and be a leader for her team.

“We played Los Gatos this week also and we lost in three, so it was kind of upsetting,” Harrison said. “I wanted the entire team to do well and boost morale and I think that we did a good job.”

In the second set, Paly got off to a slow start, making several errors and falling behind, 4-8. However, an explosive kill from senior outside hitter Thea Enache helped Paly regain their momentum and the Vikings closed out the set, 25-20.

According to Enache, most of Homestead’s points were the result of the Vikings’ own errors.

“We talk about this a lot in practice and we do drills where you lose double the points if you make errors,” Enache said. “I think we need to minimize our errors in order to beat teams at States, but for now we are taking a step in the right direction and I’m glad we finished it [the set] quick today.”

The final set proved to be somewhat more challenging for the Vikings to find the win, with Homestead gaining momentum quickly in the start and earning a lead of 4-7. However, after a timeout and another strong kill by Enache, the Vikings came back and finished the set, securing a winning score of 25-21.

Watanabe, who made several great saves in the third set, said the Vikings were determined to recover after their errors at the start of the match.

The Vikings play next against the Los Altos Eagles at 6:45 p.m. Wednesday at Los Altos.