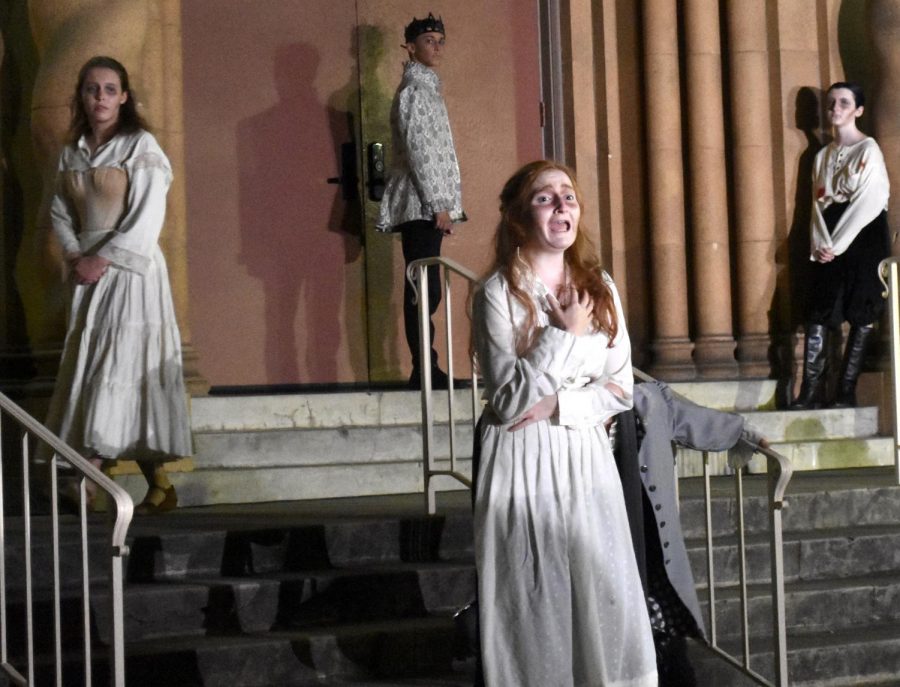 Following a series of online productions over the past year, Palo Alto High School Theatre is taking the stage with an interactive outdoor performance of “Something Wicked This Way Comes” from Sept. 24 to 26.

“Something Wicked This Way Comes” is a unique collection of Shakespeare play excerpts assembled by Paly Theatre Director Sarah Thermond. It allows the audience to interact with the characters and move between locations throughout the performance.

Thermond said the show fits the fantasy theme shared with upcoming productions this year while also working well in an outdoor setting. According to Thermond, Paly Theatre had a September production slot reserved but was still unsure what COVID restrictions would look like upon return. To ensure safety, Thermond decided to create an outdoor show.

“Once we [Paly Theatre] realized we would be outside, I remembered students talking about how much fun it would be to do a show where the audience goes around to different locations,” Thermond said. “Because Shakespeare is in the public domain and has lots of great characters, I thought Shakespeare’s magical shows would be the best choice.”

“You sort of get a basic idea of each of the shows instead of having just one long show, and because of that, we only got the most entertaining spots of each one,” Arradaza said. “You also get to see different characters interact with others from different shows, and you don’t get to see that anywhere else than this show.”

The actors and crew are taking full advantage of their outdoor space including these new character-led and audience interactive tours.

According to Arradaza, the performance will consist of collective opening and closing scenes, along with character-led tours around various campus locations where audience members will watch short scenes with the characters. While touring the scenes, audience members are encouraged to talk to the actors, Arradaza said.

“That’ll be the hard part — having to stay in character while watching the scenes [and] interacting with my other tour guide as well,” Arradaza said. “We’re going to have to work off of each other, and we also have to make sure the audience is involved in this as well.”

Sophomore Roxanna Reid, who plays Ariel, said she is excited to have this level of audience participation in her first in-person Paly Theatre production.

“Audience members get to travel around the PAC and Haymarket building during the show,” Reid said. “It’s a really immersive experience that’s unlike other school plays in the past.”

According to senior Maya Mazor-Hoofien, the assistant director and hair designer for this production, Paly Theatre made an effort to involve the audience beyond simply talking with the characters.

“Cast members will talk to them [the audience], hand them things, react to them, and scare them,” Mazor-Hoofien said. “This show is funny, terrifying, tragic, and beautiful in a way that so perfectly combines iconic themes of Shakespeare and demonstrates why those plays have stood the test of time.”

Actress and Makeup Designer Anneke Salvadori, a Paly senior who plays a ghost named Cordelia in the performance, said it was a challenge to put the show together in just two and a half weeks, particularly for technical elements.

“Our lighting team has managed to pull together a lot of things that you wouldn’t necessarily think of off the top of your head because we’re outside,” Salvadori said. “Some characters have flashlights that we use, or there are hidden lights in a cauldron or scattered around that maybe aren’t as obvious to the audience but really do provide a lot of light for the scene.”

This play will serve as Paly’s transition from online to in-person productions, so adaptations to the crew’s staging are going to be significantly different. However, Salvadori said she has enjoyed taking on the new challenge.

“Blocking [staging] online shows is a whole different beast than blocking in-person shows because you have to take into account things like heights and where people are standing because we also have to be socially distanced,” Salvadori said. “It’s definitely really great to be able to work off of seeing partners … because in Zoom, we can only really use the upper half of our bodies.”

According to Thermond, creating a production that encapsulates Shakespeare’s complexity while adapting to the new stage setting has proven to be a challenge.

“Paly hasn’t done a show like this before, so we don’t have past experience to fall back on,” Thermond said. “But I also think that doing something totally new makes it exciting and keeps us motivated.”

Mazor-Hoofien echoed this sentiment and said that the cast and crew approached the production with impressive creativity.

“More than any other show we’ve done, this was only ever going to be as good as the cast and crew decided it could be because there has never been a production of this show before anywhere,” Mazor-Hoofien said. “I am immensely proud of the cast and crew for shattering my greatest expectations. ”

Tickets for “Something Wicked This Way Comes” are available through the Paly Theatre website until Sept. 26.