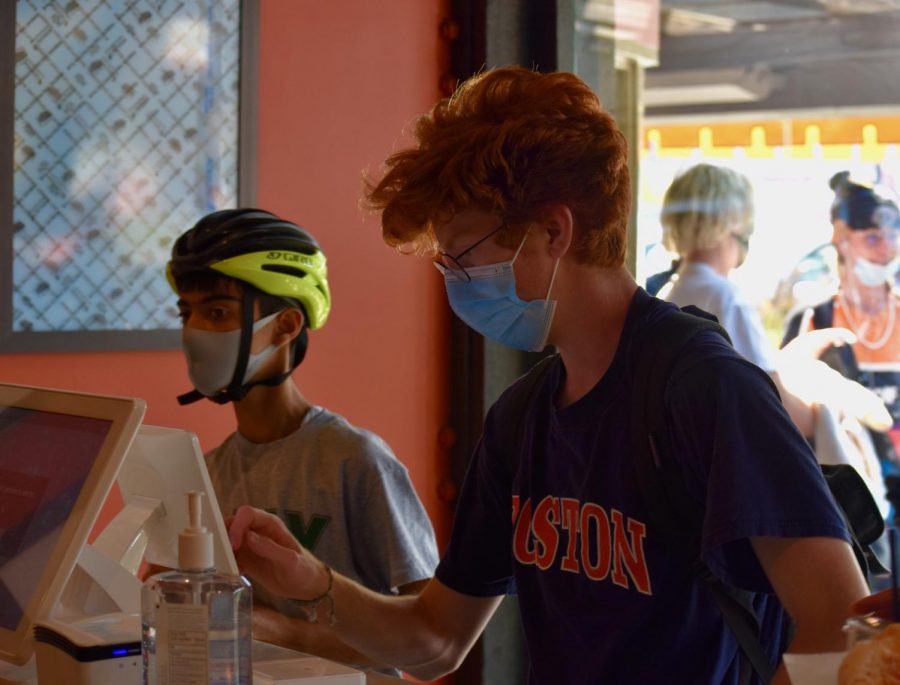 Senior Henry Miller orders a lunch meal from Kirk's Steakburgers at Town & Country Village. Many restaurant owners enjoy the positive impact that students are bringing to their businesses now that they have returned to in-person school and shopping at the Village. "It's also just nice to see the energy of people out and about again, it sort of feels a little more normal to have the kids back," said Rick Junker, owner of Kirk's Steakburgers. Photo: Daniel Garepis-Holland.

Restaurants and shops at Town & Country Village are experiencing an increase in business with Palo Alto High School fully open for in-person learning this school year.

With students away from campus since March 2020 due to the COVID-19 pandemic, businesses did not receive the same volume of student customers that they saw during past years. Students previously would cross Embarcadero Road to Town & Country Village before, during and after school hours.

Many businesses are already starting to see the same number of student customers as before the pandemic. Mike Kelly, manager at Howie’s Artisan Pizza, said that about 45 students a day purchase their lunch combo meal, which includes a slice of pizza and a soda for just under $8.

“It [45 students per day] is a pretty good start,” Kelly said. “I think that’s about where we were pre-pandemic — two years ago when you guys were here — it’s about the same numbers. It’s definitely good for us.”

Rick Junker, the owner of Kirk’s Steakburgers, another restaurant at Town & Country, said that students provide a consistent increase in business.

“It [the students] definitely brings a steady stream of business in, not a ton, but certainly, it’s a positive impact,” Junker said.

On the other hand, some restaurants have not recovered the student business they had before the pandemic. According to Asian Box CEO Chuck Imerson, the restaurant was receiving around 40-60 students per day and is now only seeing 10-30.

In addition to the lack of student traffic, a lack of faculty traffic has impacted Town & Country businesses during the year and a half of virtual learning.

“Principals and teachers would come, hang out, and maybe talk after classes, and obviously, that was not happening anymore [due to COVID],” Xavi Pedrosa, manager of Telefèric Barcelona, said.

Despite the many positives of student customers at Town & Country Village, there have been both recent and past incidents of student misconduct, including vandalism and theft. In one recent instance, students vandalized bathrooms and tables at Kirk’s Steakburgers.

“We’ve had graffiti in the bathrooms, we’ve had tables carved,” Junker said. “It’s just kind of cruddy, because somebody’s got to pay for that repair.”

Student misconduct is not a new issue at the Village. In 2019, a series of thefts by students at CVS Pharmacy prompted the five-at-a-time policy, where only five students were permitted to shop at a time during lunch. The Paly Voice reached out to CVS Pharmacy but store representatives declined a request for comment.

Paly’s reopening may slightly increase incidents of vandalism or theft at Town & Country, but has overall been a positive change for Kirk’s Steakburgers, according to Junker.

“That’s [the incidents of misconduct] pretty far and few between, and for the most part, it’s positive,” Junker said.