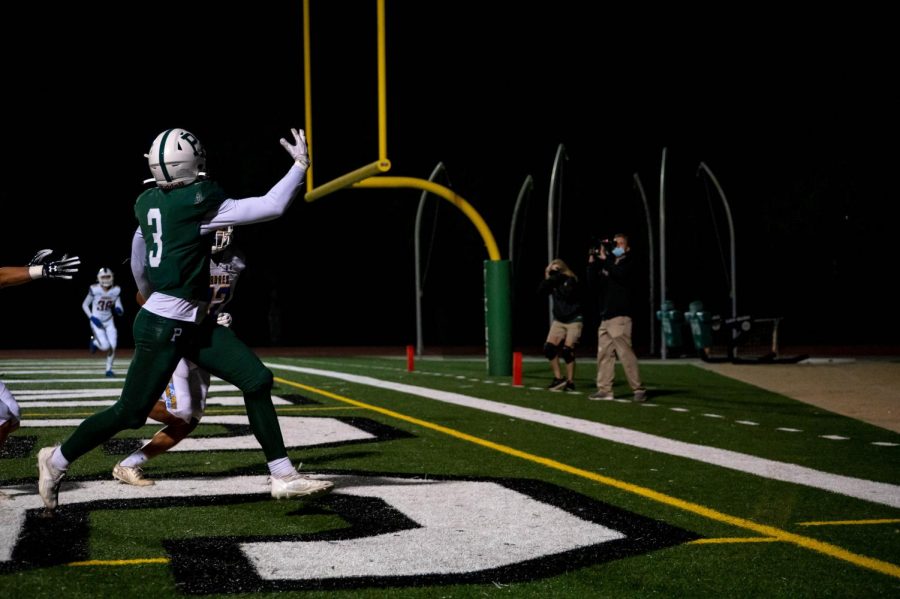 Junior wide receiver and defensive back Amani Elfadil jumps for the ball in the Padres' end zone. (Photo: Ryan Lee)

The Vikings went into the season game following a loss to St. Ignatius High School, but kept their heads high and played hard, according to varsity football coach Nelson Gifford.

“The effort was there from the start to the finish,” Gifford said. “I was really really happy with that. The other thing was the attitude. Obviously we played an amazing team and Serra got up early. There were plenty of opportunities to hang our heads and be upset, but I thought the guys were able to shake that off and continue to play hard.”

“I think our captains really stepped up in this game,” Lau said. “They really kept the team up, they did their best to make sure they [the team] didn’t have their heads down, and they made sure everyone didn’t look at the scoreboard and then played like it was 0 – 0.”

Viking senior wide receiver Brody Simison caught a pass from senior quarterback Danny Peters, scoring Palo Alto’s first touchdown in the game in the fourth quarter. According to Simison, the play was well-coordinated and executed.

“I was so happy that Danny saw me and made that connection,” Simison said. “I told him the play before — that I was going to be open on that clear route, and he saw me, he threw the ball to me and we connected. I made one cut, ran to the end zones, the team was hyped and we were all happy for that. I’m excited to score against the 91st best team in the nation.”

Despite their loss, Gifford said he was overall proud of his team’s performance against the Padres and that he wanted his team to detach the outcome of the match and the effort they put in.

“Sports are an opportunity to learn lessons, and this is the lesson of continuing to put forth effort, even in the face of great opposition,” Gifford said.

The Vikings are set to play against Pioneer Mustangs at 7 p.m. Friday, at home.