All roads lead to Jerry Berkson 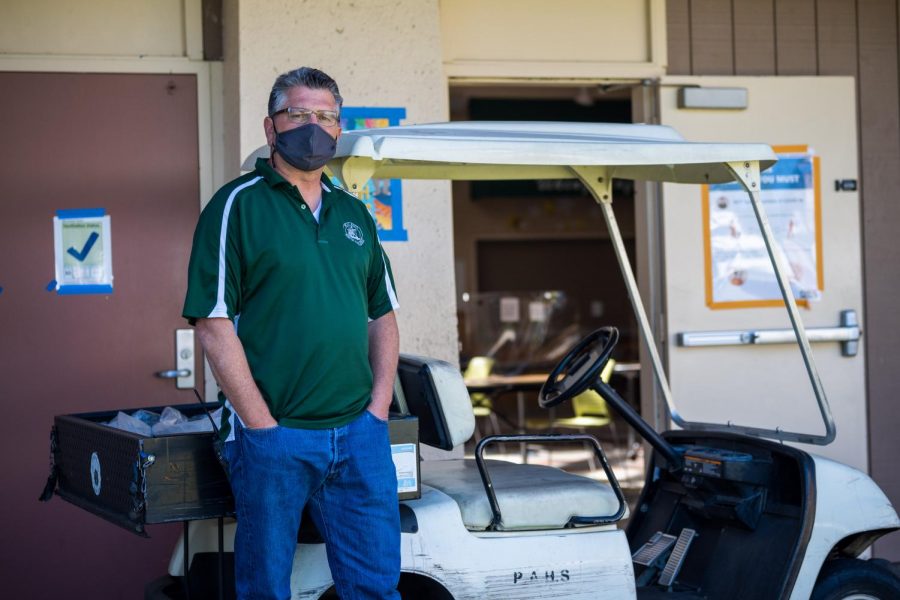 Assistant Principal Jerry Berkson deserves a raise (at least in my humble opinion).

Over the course of a 30-minute interview late last month to discuss the unusual school year, I lost track of how many times we were interrupted — from texts to phone calls to people popping into Berkson’s office in the Tower Building. People regularly approach him for just about any issue, Berkson says.

“As far as staff goes, I’ve been a go-to guy,” Berkson says. “If I walk across the Quad, it takes a while to get across … and answer questions.”

During his 15-year tenure as an assistant principal, Berkson’s role at Palo Alto High School has slowly expanded to cover facility administration, Title IX, budget management, AP testing, discipline and — as he says with a smile — walkie-talkies.

Then a pandemic hit, presenting countless challenges to schooling that shook Berkson’s routine. From overseeing the movement of mountains of furniture and installation of plexiglass shields to ensuring compliance with health protocols to solving technical issues to administering AP exams, a hectic pre-pandemic daily schedule, in a post-pandemic world, became a juggling act.

Given that Berkson played such an instrumental role in keeping Paly functioning by taking on so many new responsibilities, I believe he deserves a raise. But Berkson is modest, saying he doesn’t “do it just for the money.”

“It’s been crazy from the uncertainty of what we’re doing as a country, a county, a state or school,” Berkson says. “So it was really tough to plan for anything, because things were changing all the time.”

After all, this is his first pandemic, Berkson points out.

Despite all of the chaos, Berkson says he credits teachers with the district’s success and looks upon the future with hope. And in return, teachers and students alike applaud Berkson for his work.

“If I need to work something out, if I need a thought partner, especially on how to get things done, the best approach to working with other people — he’s always got a great perspective,” says AP English Language teacher Kindel Launer. “He’s a great coach and he helps me be a better teacher.”

“His emails are very direct and he doesn’t beat around the bush, which is much appreciated as a student journalist,” Kapoor says.

While Berkson is the school’s longest-serving assistant principal by far, Berkson hasn’t always worked in education. Straight out of high school, he was first a high school baseball coach who owned a baseball card shop. When the local teams went into a slump however, he decided to sell his shop and pursue teaching, starting as a part-time history teacher for two years at San Mateo High School, then becoming a full-time P.E. teacher for four years at Abbott Middle School.

One day during his time at Abbott, a friend called to tell him about an administration program and on a whim, Berkson says, he decided to pursue his credential. After half a year of working as a teacher on special assignment in charge of attendance at Paly, Berkson became an assistant principal.

For his first couple years, Berkson says he experienced impostor syndrome as he doubted his own abilities to lead, but he managed to build his confidence over time.

“For years, I was like, ‘When are these people going to figure out that I don’t know what the hell I’m doing?’” Berkson says. “People used to come to me and I was like, ‘Who am I?’ But they keep coming back so I must be doing something right.”

With roughly 10 years left before he likely retires, Berkson says he hopes to pursue his passion in business after leaving Paly. While he has long sold his baseball card shop, he still owns a small clothing company and recently invested in a restaurant and bar establishment in Michigan.

While the summer will offer Berkson what many would consider a well-deserved break, Berkson says he will enjoy the hiatus from work but doesn’t plan to, in his words, “relax on a beach somewhere.” He’ll likely be instead busy barbecuing and recruiting kids to play baseball.

“I don’t like to relax and I don’t like to sit at the beach,” Berkson says. “I definitely need some time off this summer but back to [school] will be no big deal.”