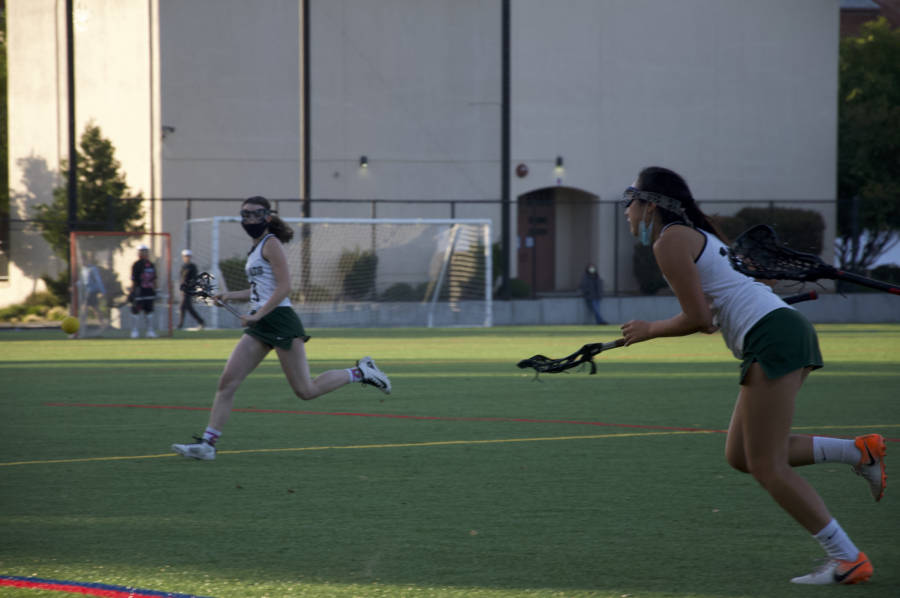 With the Vikings going into the game holding first place in the Santa Clara Valley Athletic League and having already defeated the Titans earlier this season, the loss on Wednesday and subsequent drop to second place was unanticipated, according to sophomore goalkeeper Kellyn Scheel.

“I think I can speak for the team when I say that everyone was pretty cocky, and everybody thought we were going to win this game,” Scheel said. “We beat them [the Titans] pretty badly the first time and we’ve been practicing pretty hard. I feel like we knew we had it and I think that’s why we lost.”

In the first half, Gunn’s strong offensive persistence overwhelmed Paly, keeping the majority of the play on the Vikings’ side. In addition, several turnovers by Paly and weak drives to the net contributed to the lack of dominance usually seen in the Vikings’ playing-style, furthering the one-sided struggle.

Although some resistance was shown in the early stages of the match when senior Heidi McIntosh managed to score the Vikings’ first goal and narrow the lead to 1-2, overall, the team was frustratingly prevented from making significant headway, ending the half trailing by four goals.

Senior Laney Henry said she attributes many of the mistakes made during the first half to the Vikings’ rushing plays and being unable to focus offensively.

“On attack, we were eager to score really quick and it wasn’t working because we were super rushed,” Henry said. “We needed to settle it down, take care of the ball, and not force it. We weren’t doing that … and that caused turnovers.”

Coming into the second half, the Vikings continued to fall short on offense, managing to only put up one goal to the Titans five midway through. Defensively, on the other hand, Paly had difficulty keeping up with Gunn’s quick-paced technique, leading to numerous opposing attempted shots.

“I would say our defense just needs to work on when they have really fast players, [and] we need to work as a team to keep up with them,” Scheel said. “I feel like we rely on a lot of our star players to take over, on defense and offense.”

Late into the second half, the Vikings started to pick up momentum and began to chip away at the Titans’ lead, with Henry and senior Lulu Gaither scoring back-to-back goals. Additionally, Henry started to win many of the center-field draws, which led to the Vikings controlling the ball and maintaining more of the possession.

Head coach Shannon Francis said that the team’s quick reactions to the various draws within the match helped them gain a slight edge towards the end of it.

“I thought they did really well at adapting to the draw,” Francis said. “We put people on the draw that hadn’t really played those positions before, and once we made those changes it really turned the tide.”

With four minutes left of playing time and the Vikings down eight goals, Henry and Gaither both managed to place the ball in the net again in two drastic runs, closing the game, 7-13.

According to Henry, the Titans’ desire to win was evidently much stronger than the Vikings’ throughout the match.

“We talked at the beginning, we knew they were going to want it,” Henry said. “We knew we had to go out there and work harder than they did [and] chase every ground ball … and we just didn’t do that.

Despite the loss, there were some positive notes and improvements during the game, Scheel said.

“We had a lot more communication, which is something that we have been lacking in the past,” Scheel said. “We had good transitions, and we played well in high-pressure situations.”

Henry says she hopes the players view the defeat as motivation to win their next game against Los Gatos, rather than letting it deter their spirits.

“If I really want to look at it in a positive way, this loss could be a blessing in disguise,” Henry said. “Because we have Gatos on Saturday, and hopefully this lights a fire under and makes us want it even more. I really hope everyone comes out on Saturday ready to rock.”

The Vikings will face off against the Los Gatos Wildcats at 10 a.m. Saturday at home.