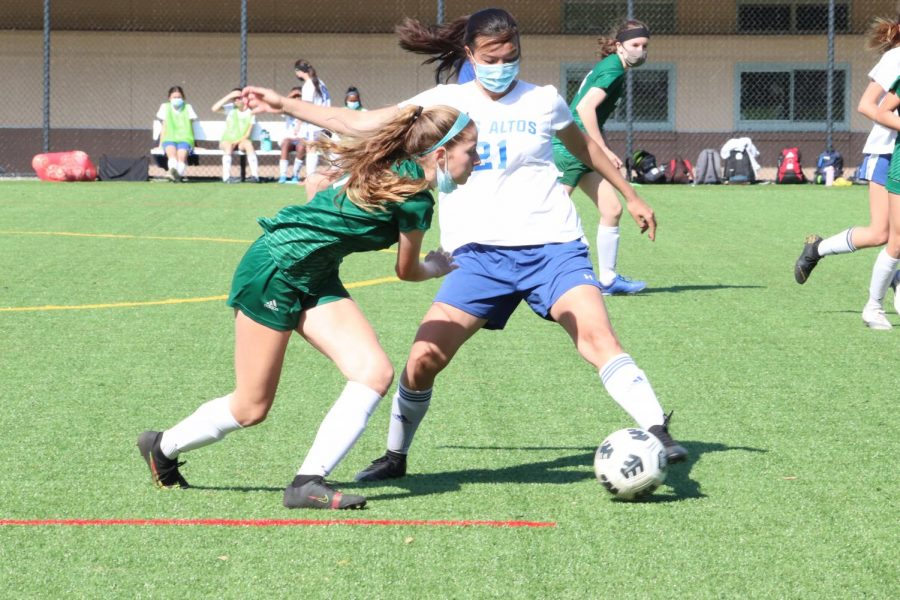 Freshman midfielder Josie Vogel attempts to steal the ball from an Eagle.

Having suffered back-to-back losses the week before against Santa Clara and Mountain View, the Vikings came into Friday’s match intending to end the season off with a win. According to Head Coach Jessie Berta, Paly had limited time to prepare, but she said she hoped to make the team’s last week enjoyable.

“We wanted to make it fun, especially for the girls on their last game,” Berta said. “It’s been a really weird season. We prepared by having a fun time on Wednesday [at practice] to make sure that they had fun today.”

The Vikings remained tenacious both offensively and defensively in the first half of the match, keeping the ball on Los Altos’ side for the majority of the playing time. In less than 10 minutes, senior forward Jenni Solgaard managed to place the ball in the net, establishing a 1-0 lead.

From there, the Vikings dominated on the attacking, with senior and junior forwards Ruby Doerr and Eva Mankos making close runs to the Eagles’ goal and initiating countless shot attempts. Towards the end of the half, junior forward Brighid Baker placed the ball in the net again, bringing the score to 2-0.

In the second half, the Vikings maintained their assertive nature and control of the game. Though the Eagles had a significant increase in close runs in contrast to the first half, due to a strong showing from Viking defense alongside senior goalkeeper Malia Wanderer, they ultimately were left scoreless. On the other hand, the Vikings kept their offensive momentum, with strong passing and shooting. Both eventually amounted to a goal by senior center defender Natalia Maahs, ending the match with a 3-0 victory.

“It’s been kind of a tough season, and we wanted to come in and get a win,” Maahs said. “Everyone was working really hard today. It was fun to play with everyone, and everyone got to play. People were subbing in a lot.”

In addition to a season filled with COVID-19 restrictions, many players played both club and varsity soccer this year, which have contributed to several injuries and difficulties during certain games, according to Berta.

“This season has been a lot of ups and downs,” Berta said. “It was a big load for the girls. They had high school, and they also had club [soccer] simultaneously playing. Over spring break, we had three games, and there were about 12 girls missing. A lot of girls got injured this season.”

The girls’ soccer program only had one team this year due to a shortage of players, which also shifted the dynamics of the team, Berta said.

“We didn’t have a JV team,” Berta said. “It’s kind of just a mismatched group all together, [but we tried] to make the best out of the situation that we were [dealing] with this season.”

According to freshman midfielder Josie Vogel, it has been a rewarding experience playing with older and more experienced players.

“I really learned how to play with older kids,” Vogel said. “Since I’m a lot younger, I had to kind of put a lot more work in.”

Looking forward, Berta said next season will be different without the five departing seniors: Wanderer, Doerr, Solgaard, Maahs, and midfielder Hailey Hwang. However, she is hopeful for more players to return in the coming regular season.

“I’m hoping a lot of the girls will come back again to play next season since we’ll be [in a] regular season, but it will be sad to have those five seniors leave,” Berta said. “They were strong players on the team, so it’ll be a little bit of a hole next season, especially since our goalie [Wanderer] is leaving. It’s really sad that she’s a senior, and we don’t have a goalie next season after her.”

This season was difficult for players balancing both club and varsity soccer, so Berta said she hopes to focus more on the team’s wellbeing.

“I’m going to try to focus more on their pain management and their health,” Berta said. “We’ll try to figure that out, so they won’t get injured and that way they’ll be healthy throughout the entire season.”