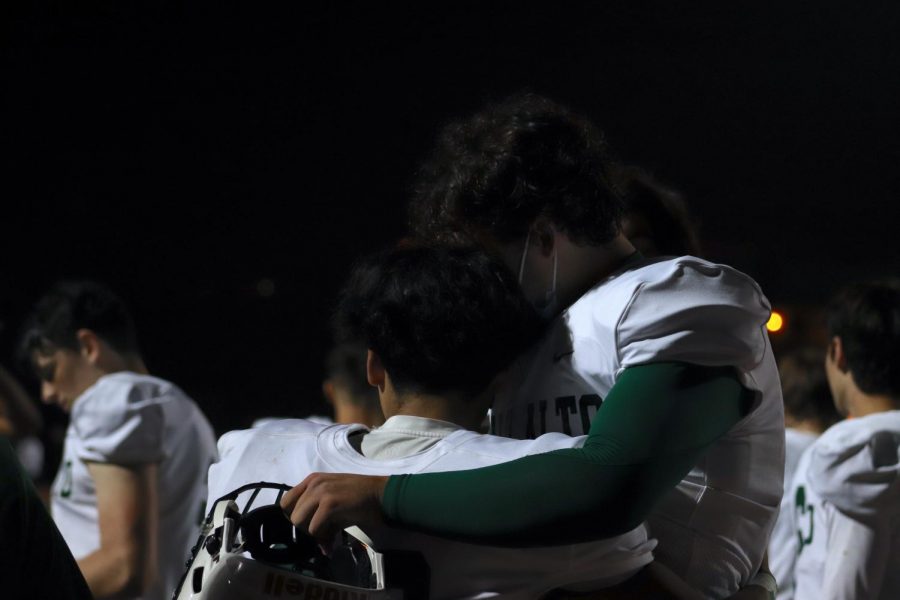 Vikings console one another post-game.

In a bittersweet final game Friday, the Palo Alto High School varsity football team (2-3) suffered a heart-wrenching defeat to the Los Gatos Wildcats (5-0), 7-45, marking the end of its brief season.

The Vikings went into the game following a victory over Santa Clara High School last week, which secured them fourth place in the De Anza League. According to head coach Nelson Gifford, the Vikings were hoping to use the game to make some final memories together.

“You know, play hard, have fun, and just leave it all out on the field,” Gifford said. “And they did that. It wasn’t about playing Gatos. It was really just about playing football and doing it with the people that you care about, and that’s what really made it special.”

Senior guard and defensive end Jackson Bundy echoed similar sentiments as it was the last game of his high school career .

“It was the first time I played a sport where I knew it was going to be my last game, win or lose,” Bundy said. “I just wanted to enjoy it. It sucks we lost, but at the end of the day, I wasn’t going to remember if we won or lost. It was going to be what I put in the game instead of what I got out of it. I wanted to give it my all and see where it got me.”

In the first quarter, the Vikings quickly fell behind after the Wildcats scored an early touchdown and later deflected a Viking punt, downing the ball in the end zone to earn two points off a safety.

The Vikings rallied back in the second quarter with runs from junior running back Josh Butler and junior wide receiver and cornerback Brody Simison, scoring their only touchdown of the night on a pass that junior tight end and inside linebacker Rowan Felsch received in the end zone. Nonetheless, Los Gatos once again gained offensive momentum and scored another two touchdowns despite a strong defensive showing from Simison and junior free safety and wide receiver Blake Chase.

Despite the early point deficit, the Vikings played with an extra high effort level at the beginning of the game, according to Chase.

“This game, we started with a lot more intensity,” Chase said. “We were hitting, we were moving, we ran fast and were making plays.”

Los Gatos continuously broke through Paly’s defensive line in the third quarter, plowing through defenders and avoiding tackles, scoring three more touchdowns over the Vikings. On the other hand, Paly’s attempts at moving up the field kept falling short, and a missed field goal left the Vikings scoreless in the quarter.

With 12 minutes left in the season, the Vikings made a final attempt to score after recovering a ball fumbled by the Wildcats. However, junior quarterback Danny Peters’ pass was intercepted by a Los Gatos defender just outside the end zone, bringing the game to a close with a score of 7-45.

According to Butler, although the Vikings lost by a large margin, the exhilarating rivalry match helped end the season on a positive note.

“Los Gatos versus Paly is … always a good game,” Butler said. “It’s always the biggest game of the year, and to wrap it up, especially in a season like this, it was a big deal. It was sad, the outcome, but it’s always fun to play Los Gatos.”

Throughout the truncated season, the team came together and began to regain its momentum, according to Peters.

“At the start of the season, we were really new to each other, and we didn’t have the chemistry we had last year,” Peters said. “You could tell every game that we came together more as a brothership, and it was really cool to see and be a part of as well.”

Looking forward to the quickly approaching next season, Gifford said he’s optimistic about seeing a football season with some semblance of normal.

“Hopefully, we’re back into school, and we don’t have to worry about a vicious disease ravaging our country,” Gifford said. “And we’re able to have fans in the stands, maybe even not wear masks, and we have a return to, not pre-COVID, but just a post-COVID life and being able to have the community feel that’s a part of high school football.”

Out of the 29 player roster, the Vikings are losing seven graduating seniors. However, the team has many strong juniors, including Butler, who scored 11 touchdowns this season and rushed the ball over 600 yards, and Peters, who has thrown almost 800 yards.

With lots of young talent on the team, the Vikings expect to improve during the offseason for a dominant performance next year, according to Simison.