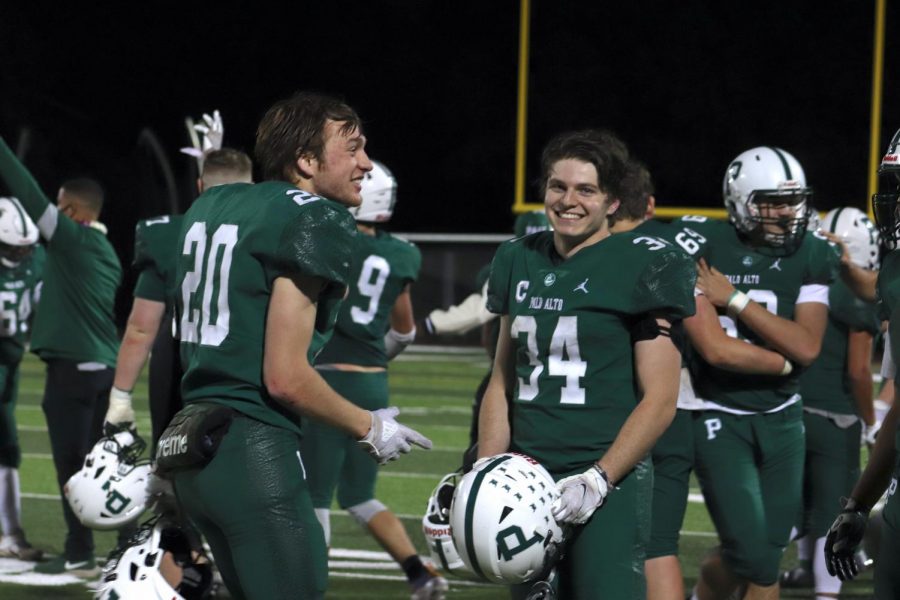 At its senior night and only home game of the season Saturday, the Palo Alto High School varsity football team (1-2) crushed the Milpitas Trojans (0-3) 59-26, successfully advancing to fourth place in the De Anza League.

At its senior night and only home game of the season Saturday, the Palo Alto High School varsity football team (1-2) crushed the Milpitas Trojans (0-3), 59-26, successfully advancing to fourth place in the De Anza League.

After a tough start to the season with losses to Wilcox High School and Mountain View High School, the Vikings hoped to break their losing streak, according to junior running back Josh Butler.

For the first time since 2015, the Vikings scored over 50 points in a game, making it a memorable night for spectators and players alike.

According to Head Coach Nelson Gifford, the Vikings brought a new energy to celebrate their seniors and make their single home game as special as possible.

“I was very, very happy to see so many guys get an opportunity to play, see them support each other, even when things were a little rough in the beginning,” Gifford said. “They continued to stay positive, continued to stay supportive, and it was beautiful.”

“I just try to take it all in,” Bundy said. “It was our one home game this year. Football has meant a lot to me this year. … This is probably gonna be a night that I remember for the rest of my life.”

The Vikings started off the game strong with four touchdowns in the first quarter. Butler scored two touchdowns on runs, and junior wide receivers Brody Simison and Blake Chase scored as well. However, Milpitas slipped through Paly’s defensive line, scoring two touchdowns but missing a point after touchdown, ending the quarter 28-13.

Gifford said he attributes the Vikings’ early offensive strength to their ability to play free from the anxiety caused by the unprecedented season thanks to the leadership of the captains.

“Everyone looked like they were actually having fun,” Gifford said. “I think there was a lot of anxiety attached to playing at this time [during the pandemic], and not having any sort of prep. This was the first one [game] where I felt they actually played loose and played with a certain freedom that you need in order to perform at a high level.”

In the second quarter, the Vikings maintained their lead by scoring three more touchdowns and shutting down the Trojans’ offense. Chase and Simison both received the ball in the end zone while junior quarterback Danny Peters ran a touchdown from the 10-yard line.

Peters said his personal highlight of the game was rushing the touchdown since it is a rare occurrence, but even more significant was the team’s unity on the field.

“Our whole team was there and it just felt awesome to have the team just do what we do,” Peters said. “The overall game was just perfect for us.”

At the half, the Paly cheer team performed its last halftime show of the season, hitting a complex stunt pyramid and dance routine.

Milpitas gained momentum over Paly in the third quarter with two touchdowns, but once again missed the kick for the point after touchdown. The Vikings kept up their offensive momentum with another touchdown from Butler, and receptions and runs from Simison and junior tight end Rowan Felsch, concluding the quarter 56-26.

In a last quarter attempt to add to the scoreboard, senior kicker Drew Mukherjee kicked a field goal after a long run from Butler put Paly within scoring range. On defense, Bundy, Felsch and junior outside linebacker Lucas Black hit the Trojans with strong tackles, preventing them from scoring again.

As Paly Football’s truncated regular season wraps up in the next two weeks, Gifford said the team goals are to play hard and have fun.

“We really just have to focus on improving on all the things that we need to improve on, understanding what our strengths are, and then go out and play and have fun,” Gifford said. “We only have two more games left. It is crazy to think [about] how short this season is, and I just want this to be as special as it can be for all these guys.”

The Vikings will play next against Santa Clara High School at 7 p.m. Friday away at Santa Clara.