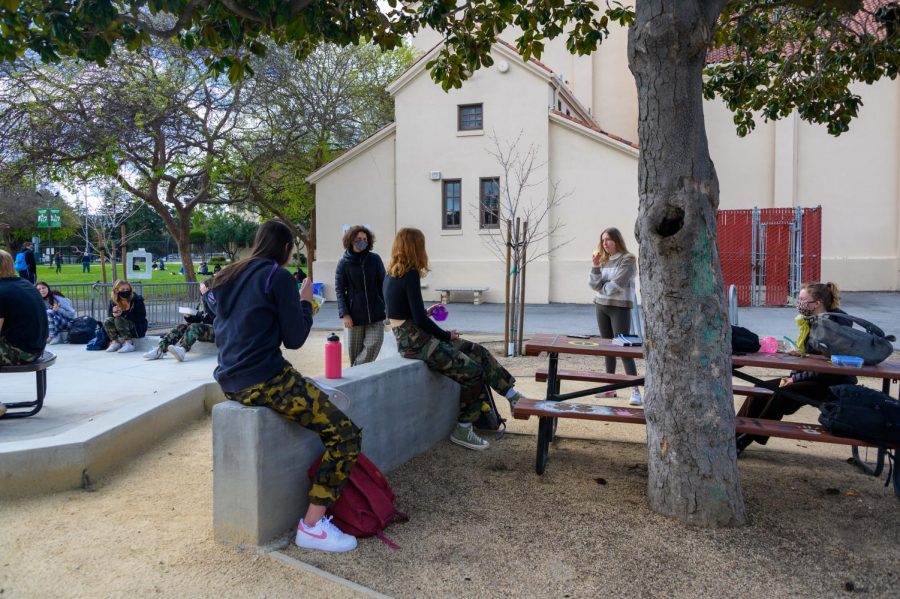 After nearly one year of distance learning, students have mixed feelings about the potential benefits of the return to in-person instruction. One bonus, however, resonates universally: improved social interaction.

Junior Gabe Galper detailed benefits of on-campus learning, including access to hands-on facilities for his ceramics class and increased socialization.

“Honestly, I got way more attention from teachers, and [the] teaching was way better [in-person],” Galper said. “I was able to ask way more questions, socialize with a friend and the teacher, and get hands-on help. … Then again, in every class, I was either the only student, or there was one other student so not a massive amount of socializing, but it’s really fun.”

In addition to the comfort of speaking with fellow students face-to-face without a computer screen separating one another, some students feel the casual chatter with teachers comes naturally in in-person school and provides yet another benefit.

“Teachers are much more approachable in person, I’m able to ask a question without feeling like I’m interrupting the entire class,” sophomore Sawyer Mickelsen stated. “It feels more like talking to another person, who happens to also be my teacher, rather than talking to a teacher. I am able to talk with teachers about non-scholarly subjects, just to get to know them or to make small talk.”

On the other hand, sophomore Owen Kuwayti said that for him, interactions with teachers did not change.

“Zooming from school was actually not that much different than online, but I found it a little strange,” Kuwayti stated in a message to The Paly Voice. “We were told to ask questions through Zoom which seemed strange when the teacher was right there in front of me. Other than that the only difference was that if the lesson finished early and all the work was done we just had to sit there versus at home we could go do things.”

Sophomore Gopala Varadarajan said he shared a similar experience with Zoom school from the classroom, though his focus improved in person.

“The only difference is that you can’t just get up whenever you want and get a snack or something,” Varadarajan stated. “I do feel like I’m a lot more on task at school because there are less distractions.”

Varadarajan said that for him, Zoom teaching was mainly the extent of teacher interactions.

“I think that teacher-student interactions haven’t really changed for me, because teachers almost always teach through Zoom,” Varadarajan stated. “There aren’t that many chances to talk with the teacher [in person].”

In terms of social interaction, the feeling is consistent across students. Despite the social distancing limitations and plastic barriers between desks, Mickelsen, for example, explained that socializing on campus allowed him to take his mind off schoolwork.

“Spending lunch with my peers is a good break, a good chance to talk about something besides school,” Mickelsen stated. “It’s also nice to be able to have side-conversations, so it truly feels like a being in a classroom rather than looking at a classroom.”

The sentiment was shared by Kuwayti, who said on-campus learning has rekindled social relationships.