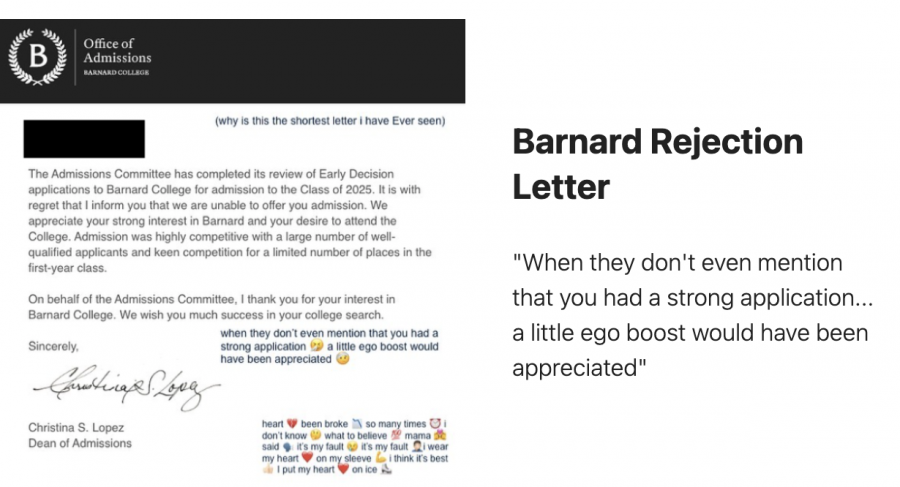 In the image above, click the “plus” signs to view a few rejection letters. This image shows where the Wall of Rejection, a storied element of campus culture, used to reside on the Palo Alto High School campus before the COVID-19 pandemic. On the wall, students posted their college rejections, often anonymously, to students gathering on the nearby Quad, a tradition that has been kept alive this year through one Paly Senior’s Instagram account.

In every one of these top universities, however, the acceptance rate remains well under 15%.

With these figures in mind, no matter how much college applicants pour witty, heartfelt writing into their essays or how many extracurriculars they pack into their resumes, many students are understandably devastated upon receiving a college rejection letter from the school of their dreams.

But one unofficial Palo Alto High School tradition, the wall of rejection, or rejection wall, was founded to dismantle the stigma of the tightly choreographed college admissions process.

Taking inspiration from the normally bustling physical wall of rejection at Paly that has been suspended due to the pandemic, Class of 2021 student David Evans posts rejection letters on Instagram — often with colorful commentary — with the goal of helping Paly students feel a sense of belonging and support from within what many consider to be a cutthroat educational system.

“Sometimes we need an outlet to share the truth of our suffering rather than feeling like we have to keep it hidden,” Bloom said. “So many in our community — and our culture — feel as though failure, rejection, struggle are somehow shameful.”

On the @wallofrejection_ Instagram account, Paly students can upload their rejection letters, along with additional notes, using a Google form. Fellow students can discuss their thoughts in the comments section below the posts.

Evans said he was motivated to start the account due to his personal experience with the physical version of the wall at Paly.

“The wall of rejection was one of my favorite parts of getting to go to Paly,” he said. “It’s something I always looked forward to … [and so] I really wanted it to happen [online] and I didn’t really take the risk of having someone else do it. I just figured, why not?”

Evans said he has received a lot of positive feedback from students about the account.

“I think it’s really cool, especially on the first couple posts, that the students were getting really involved and they [were] showing support,” Evans said. “Now I’ll get some DM’s every now and then like, ‘hey this is a really cool idea I’m super glad you did it’ or ‘…I thought of it I’m so glad somebody executed.’”

According to Evans, student behavior has become less anonymous on the account over time.

“More and more frequently, I’m seeing people not take out their names and kind of own their rejection, and I think that’s really cool,” he said.

Evans said that the local community places a lot of pressure on students to perform well on their college applications, which can provoke mental health issues for many students.

“I think some people can get really wrapped up in the idea that they feel alone,” he said. “They’re like, ‘Oh, I’m dumber than other people’ and … they’ll see [that] so and so is going to X University and they may have not even gotten in, and that can be a really [bad] feeling when you don’t feel like you’re good enough.”

Bloom said he believes it is important to remember that not all students share the same experiences.

“Not everyone is applying to college or feels they have the opportunity to do so,” he said. “Some people are experiencing deeper levels of suffering that make academic performance in preparation for college a challenge.”

However, Bloom said he worries that the wall could function as an inadequate coping tool rather than a substantive solution to the issue.

“Does the wall promote a culture that is so heavily focused on college and getting into elite schools that it actually serves to diminish the value of less well-known schools, community or vocational college, or entering the workforce?” he said. “…I think sharing our pain with each other is a starting point, but how we do that matters.  I’m not convinced the wall of rejection provides the kind of support and discourse that is really needed to deal with pain.”

Bloom said that perhaps the term “rejection” should not be used when describing the college admissions process.

“For many of us rejection feels like a rejection of who we are, and that is where unhealthy feelings of shame come in,” he said. “In fact, we were rejected because we didn’t fit their criteria — it is more about who they are than who we are.  I’m not sure what a better term might be, but I don’t like the idea that it reinforces in any way feelings of shame.  What about ‘Wall of Compassion?’ The word compassion literally means ‘to suffer with’.  That seems to me to promote the experience in a healthier way.”