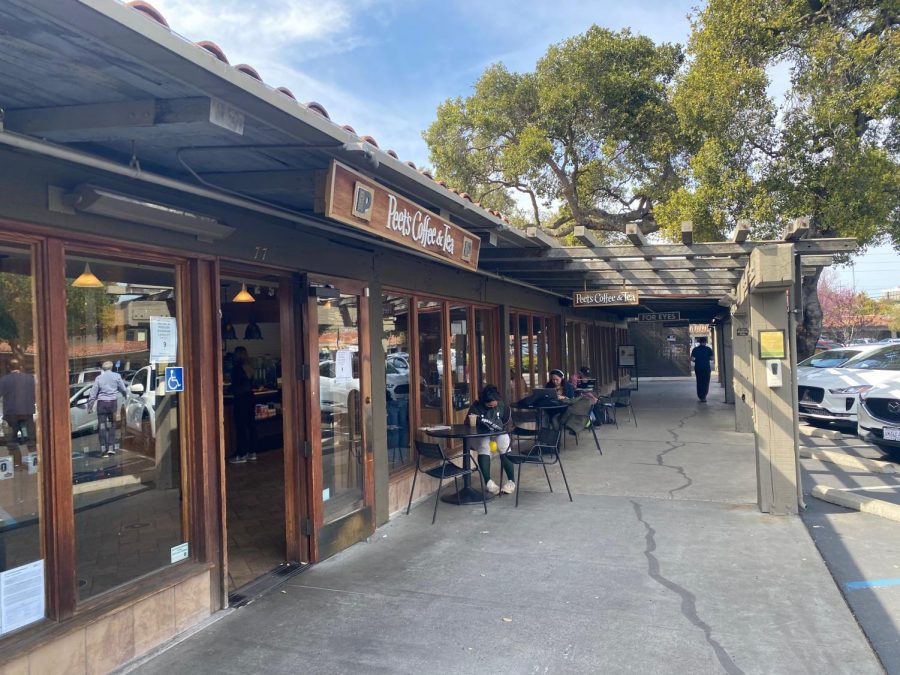 Seniors eat lunch on the senior deck at Palo Alto High School after students returned to school for the first time this school year. Students will now be allowed to leave campus for lunch and prep periods after Santa Clara County entered the orange tier following the continued decrease in COVID-19 cases. Photo: Daniel Garepis-Holland

Another tenet of “normal” student life will now return after officials announced Tuesday that effective Wednesday, Santa Clara County could move into the less restrictive orange tier, meaning that Palo Alto High School will return to being an open campus.

The move will bring changes to students and adults alike. According to Palo Alto High School Principal Brent Kline, students will now be able to leave campus during the school day. Presumably, an “open campus” means that students will be able to leave campus during times when they do not have class and return for instruction later in the day. No specifics about these changes have been released to students so far.

Certain sports will also be allowed to resume under the new restrictions. Changes to sports will be announced when the Voice interviews Athletic Director Nelson Gifford tomorrow afternoon.

Students have generally had positive reactions to the changes to campus rules. “As someone who isn’t a fan of bringing lunch or eating cafeteria food, I usually didn’t even eat lunch when I came to school,” sophomore Alexis Carey said. For them, allowing students to leave campus for lunch will drastically improve the on-campus experience.

Other businesses are reopening for the first time in months. Offices may open for in-person work, although remote work is strongly encouraged. Entertainment centers such as bowling alleys may open indoors, and bars may reopen outdoors. Amusement parks may also open for outdoor operations, and live audiences may return for outdoor events such as performances and sports games.

However, students remain skeptical of the safety of some entertainment venues, and few plan to attend at this point in time. Many have concerns about sanitization as well as the enforcement of masking and social distancing. Reopening of these events in other states with more lenient restrictions and enforcement has led to events where crowded venues were packed with participants ignoring protocols such as masking and social distancing.

Sophomore Kylie Tzeng echoes these concerns, worrying that there will be “crazy amounts of people” flocking to amusement parks after the reopening, and doubts that she would feel safe. On the other hand, junior Alex Franklin believes that “live sports events could be made safe, and are something I would definitely consider attending.”

Many factors have contributed to the sharp decline in cases in recent months. Researchers at the University of Washington noted that two factors in the decline were “the continued scale-up of vaccination” as well as “declining seasonality.” As of Sunday, 28.2% of Santa Clara County residents aged 16 and older have received at least one dose of the COVID-19 vaccine.

Improved adherence to coronavirus countermeasures has also contributed to the decline. In an interview with CNN, Centers for Disease Control director Tom Frieden suggested the recent decline could be attributed to measures including “staying apart, wearing masks, not traveling and not mixing with others indoors.”

“To continue to prevent cases and resultant hospitalizations and deaths, we must continue to wear masks, social distance, stay outdoors as much as possible, and get vaccinated when it’s our turn,” Cody said.

Residents over the age of 65 as well as long-term care facility residents and those working in the healthcare, emergency response, agriculture, food, and education sectors are eligible to receive a vaccine under the state’s current guidance.