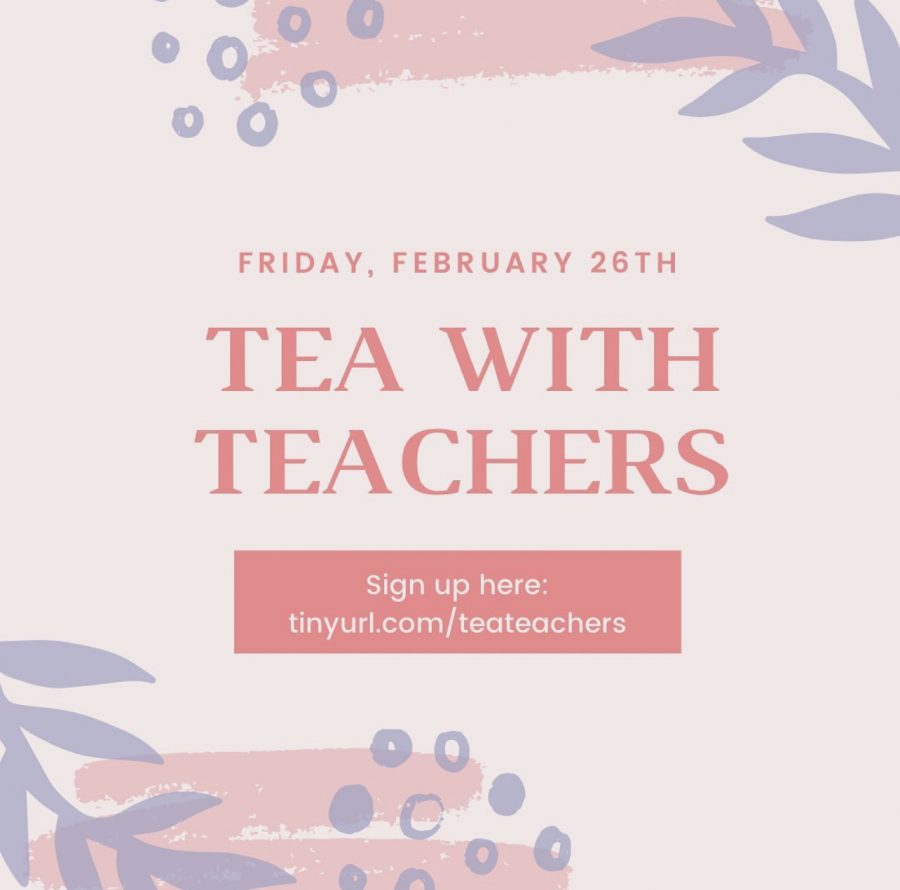 The upcoming Tea with Teachers event offers students a virtual way to connect with Palo Alto High School teachers and discuss shared interests at lunch on Friday. According to senior Cindy Lui, the Associated Student Body treasurer and member of the Tea with Teachers planning committee, the goal of the event is to give students an opportunity to get to know both their own teachers and others that they may have in the future. “Hopefully, it will increase the sense of community at Paly, especially between underclassmen, especially freshmen, and the teacher community,” Lui said. “I hope this opportunity will be a chance for them to know each other better and spark some dialogues between the two, which I feel like rarely intersect except in a typical classroom setting.” Photo: Paly ASB

Editor’s Note: This story features an auto-generated voiceover, provided by Ad Auris. Press the green play button to listen to the audio.

Students and teachers will have the opportunity to connect over similar interests at the upcoming Tea with Teachers event, hosted virtually by Palo Alto High School’s Associated Student Body during lunch on Friday.

During the event, students will enter breakout rooms with teachers based on preselected topics of interest. ASB Treasurer Cindy Liu, a Paly senior and member of the Tea with Teachers planning committee, said that she hopes the event will help students bond with teachers.

“I feel like most students haven’t really had the chance to talk to their teachers in a casual setting,” Liu said. “We thought it would be a good opportunity for students to get to know their teachers better, especially in a virtual setting.”

As an incentive, the first 30 students who sign up will receive boba tea delivered to their houses. According to Liu, ASB wanted to encourage participation while ensuring that students would gain more from the event than simply a free drink.

“ASB has hosted quite a few similar events in the past semester, and participation hasn’t been very high … which is partly why we have the incentive of having boba delivered to them,” Liu said. “But then at the same time we want to balance and make sure it’s not just the food they’re coming for. We wanted them to actually like the event and make sure that the event is attracting students instead of these incentives.”

Stacey Kofman, one of the teachers planning to participate, said that she is looking forward to discussing sports and opera with students.

“I think this is a great way to meet other students not involved in my classes,” Kofman said. “I think this will help [teachers and students] connect [with] each other at a deeper level, as we will have more in common with each other. And then when we do see one another on campus or in the community, we can acknowledge one another.”

According to Liu, ASB planned the event last year but cancelled it due to the March closure. While similar to previous events such as “Grill and Chill,” Tea with Teachers is the first to be held virtually. Liu said that she hopes the event will increase the sense of community on campus once more students are able to return.

“If they [students] were to go back to campus next semester, this might be a good opportunity to get to know teachers who they might see on campus next school year,” Liu said. “Hopefully, it will increase the sense of community at Paly.”

Students interested in attending Tea with Teachers can sign up for the event with this form and attend with this link.