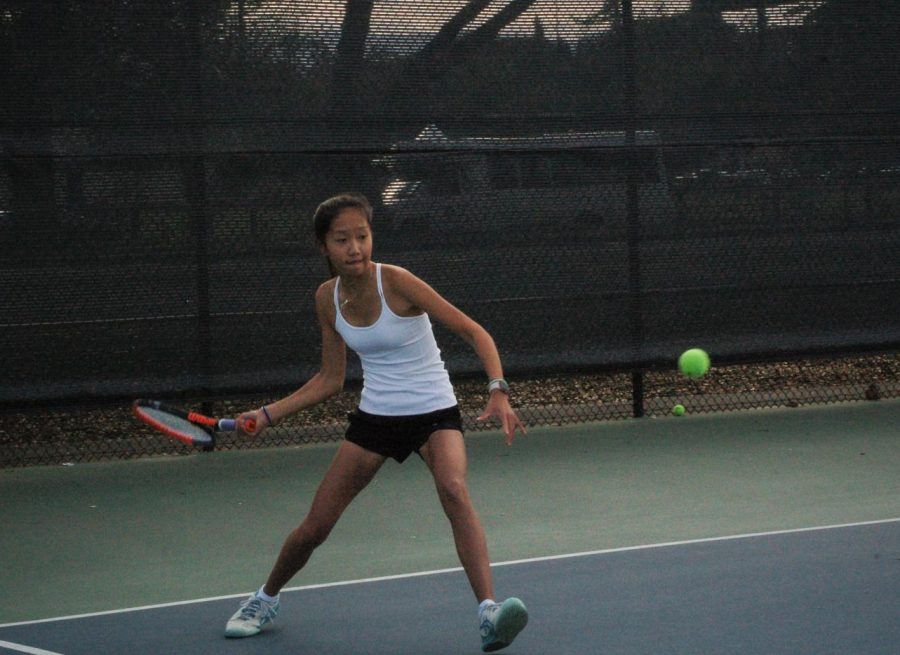 In the first home game of the season, the Palo Alto High School girls’ tennis team (2-0) trounced the Saratoga Falcons (1-1), 6-1, on Thursday.

The Vikings went into Thursday’s game with momentum after defeating Los Gatos the day before. According to senior Gwyn Wong, she was anticipating an easier match against the Falcons.

“I was expecting them to lob a lot because they’re kind of a weak team,” Gwyn Wong said. “I knew that they were not going to be very strong, but I needed to have a lot of patience because with lobbers the points are really long.”

In Singles No. 1,  junior Iris Li said she hoped to remain calm throughout her match against the Falcons’ top player.

“My mindset was just focus on myself and don’t get distracted because there’s a lot of stuff going on around,” Li said.

Erin Li dominated in her singles No. 2 match against Saratoga player Naisha Agarwal, winning both sets, 6-0. According to coach Andy Harader, Erin Li’s strong performance shows that she has quickly become an important member of the team.

“She [Erin Li] won decisively yesterday, and she won decisively today,” Harader said. “She’s a freshman, she’s going to be a really incredible player. It’s nice to have a freshman girl who can go in there and really compete.”

Sister duo Gwyn Wong and Lauren Wong won their doubles No. 1 match in two sets, with scores of 6-4 and 6-0. According to Gwyn Wong, she and her sister make a strong doubles team.

“I think we also kind of help each other relax because we make jokes together on the court,” Gwyn Wong said. “We also have different styles of game, like I hit with more topspin and she’s more of a flat hitter, and she has really good serves and I don’t, so we really complement each other.”

While the Vikings dominated over the Falcons in terms of points, Harader said the match was tough.

“There were many matches that were really close,” Harader said “It’s only our second match of the season, and a lot of the players, because of COVID, haven’t been out there playing, so everyone’s kind of got a lot of rust, and I can see it on some of our players, but in the end they pull it out.”

According to Harader, the Vikings’ next game against Monta Vista will be a difficult match.

“We’re facing probably the top team … Tuesday, and they’re really good,” Harader said. “They were good last year when we played them, and we went with them head-to-head, so we could compete with them, but they didn’t lose anybody … they’ve got a lot of returnees, and it’s going to be a real battle for us to win that one.”

The Vikings and the Matadors will face off at 3:30 p.m. today at Monta Vista.