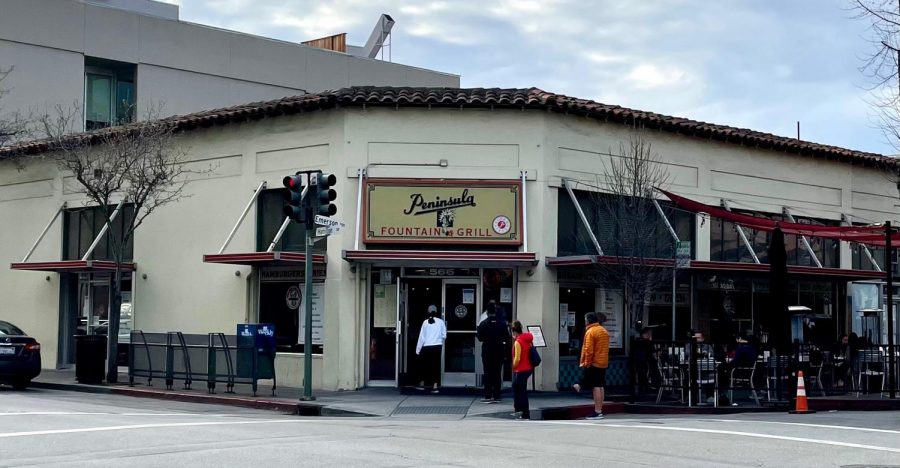 Customers line up outside the Palo Alto Creamery and wait for takeout and outdoor dining. Like many small businesses, the locally famous restaurant has been struggling financially during the pandemic. To help protect the restaurant, Palo Alto High School graduate Olvia Koyama created an online fundraiser in honor of mother. “The Creamery has remained a place that really makes Palo Alto feel like home,” Koyama stated in an email.

Editor’s Note: This story features an auto-generated voice over, provided by Ad Auris. Press the green play button to listen to the audio.

Standing proud for over a century, the Palo Alto Creamery has united generations of local diners.

However, as the pandemic-induced economic crisis drags on, the iconic establishment has struggled to find a reliable source of income. On top of the restaurant’s pre-existing financial problems, Owner Rob Fischer tested positive for COVID-19 in December, temporarily closing the Creamery and placing it at further risk.

Enter Olivia Koyama, a Class of 2014 of Palo Alto High School alumna and a life-long Creamery customer. Ordering her favorite French dip sandwich and chocolate chip milkshake, she is a perfect example of a diner whose family has been returning to the Creamery for decades. For Koyama, the restaurant is a place that holds fond memories of her mother, who died suddenly in December after a battle with lung cancer.

Taking inspiration from her mother’s passion for helping others and their personal connection to the Creamery, Koyama created an ongoing fundraiser to bring financial relief to the restaurant.

“My mom always made an effort to help people in-person, so we wanted to choose a cause where the money raised could have a direct impact,” Koyama stated in an email to The Paly Voice. “More so than anything, the Creamery has remained a place that really makes Palo Alto feel like home.”

Since its launch on Dec. 19, the fundraiser has almost tripled its original goal of $10,000. Despite the generous donations from community members, Koyama stated that the Creamery continues to scrape by.

“[In] our last conversation with the owner, we learned that the amount of money we have raised so far would cover about a month’s worth of expenses,” Koyama stated. “With dining restrictions constantly changing, winter weather, and no clear idea of when the pandemic will be over, I still really worry for their future.”

According to the owner of the Creamery, Rob Fischer, the fundraiser has been critical in helping the restaurant during difficult financial circumstances.

“It really helped us to be able to pay our employees and to bridge a gap in time between being closed down and opening up for outdoor dining,” Fischer said. “On a personal level, boy, it really renewed my faith in humanity.”

In addition to the financial hardship faced by the restaurant, Fischer and his wife recently recovered from COVID-19.

“I had it the worst of everybody and I was fortunate that I didn’t have to go to the hospital,” Fischer said.  “I was able to ride it out. … It was hard on the business because we had to close. … We had to make sure that no one else contracted the virus, and we were very fortunate no one else got it.”

Fischer’s diagnosis further motivated Olivia Koyama and her family to initiate the project.

“The owner told us that the day we told him that we wanted to set up a GoFundMe for the Creamery had actually been his first day back to work,” Koyama stated. “It all felt very serendipitous – and reassured us that we had made the right choice.”

Koyama said she and her family often reminisce about the treasured memories they share at the roughly century-old restaurant.

“On my 7th birthday, we went there for breakfast and they put a candle and my pancakes and the staff sang to me,” Koyama stated. “When I went off to college, my mom would send me off the plane with one of their coffee cake muffins. And for my mom’s birthday last year we had all gotten matching ‘Shake Shake Shake’ shirts.”

While the fundraiser has been an incredible success, Koyama wishes that donations to the establishment could be tax-deductible, with the massive economic downturn affecting the ability of many to donate.

“The only concern we had … was that none of the donations would be tax-deductible,” Koyama stated. “We are very aware that in the current times, finances are hard for a lot of people.”

Koyama said she is elated that so many decided to donate or order from the restaurant despite their own circumstances.

“We were overwhelmed with the support we received and especially at the number of people that messaged if there was a cause that they could support in her name,” Koyama stated.

According to Koyama, the local mom and pop store is an integral part of what ties the Palo Alto community together.

“I think the Creamery is a place that means a lot to many people on a personal level,” Koyama stated. “Palo Alto has a global reputation for its role in Silicon Valley and technological innovation, but I think for a lot of residents, it’s places like the Palo Alto Creamery that really make it feel like a small town.”