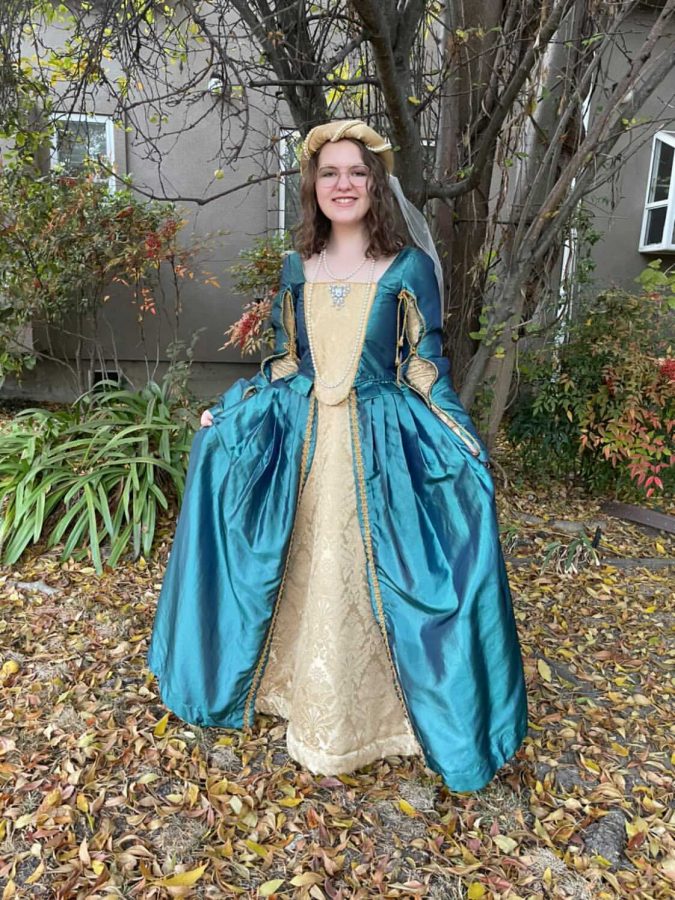 Dressed in elaborate Madrigal attire, senior Edie Gollub spent the past week preparing to play the role of Lady Jane in Palo Alto High School Choirs’ 18th annual Madrigal Feaste. Students prerecorded their videos individually and are looking forward to the premiere of the first ever virtual Madrigal Feaste at 7 p.m. Friday. “I’m really proud of both my fellow choir kids and our teachers alike,” Gollub said. “We’ve been able to go way beyond what I ever thought a choir could do virtually and put out some really amazing stuff.”

The campus typically filled with monarchs and aristocrats the week of the Madrigal Feaste looks a little different this year, as Palo Alto High School Choirs are taking their talents to a virtual stage for their 18th annual performance.

The concert will feature a story about King Henry VIII performed by student actors dressed up in Madrigal attire, as well as songs performed by each of the Paly ensembles.  The event typically also involves serving food to create a more immersive experience, but this year, the audience will tune into the  pre-recorded performance from their own homes.

Senior Edie Gollub, who plays the role of Lady Jane in this year’s production, said that although students cannot act and sing for a live audience or serve food as they normally would, the upcoming performance still brings much to look forward to.

“The Madrigal Feaste is usually our biggest production of the year,” Gollub said. “This year is definitely different. …That being said, our big theme is that the song remains the same, and no matter the type of concert, we still have beautiful music, fun acted scenes, and fancy wear.”

According to Paly Choirs Director Brittney Kerby, the preparation process shifted from extended rehearsals leading up to the performance to editing students’ recordings submitted in advance.

“Since our concert is digital, a lot of the intense prep work happens weeks before and then we have to wait for all the video and audio editing,” Kerby said. “The final show is a bit of a surprise for both students and teachers since it doesn’t come together until all the technology work is done.”

Paly Choirs have hosted several other virtual concerts throughout the semester, giving students opportunities to improve their recording techniques despite the challenge of performing individually.

“It’s really hard to match our individual tones for each piece because we can’t hear each other while we sing, which is why we use professionally recorded tracks for each part,” Gollub said. “It can also be a little nerve-racking to sing a tricky or loud part into a microphone at home when other people are around. I’ve definitely improved as time goes on, and we’re all learning how to deal with the anxiety that comes from recording.”

According to Gollub, students learned to record using headphones and mufflers to eliminate noise in the background, as well as visual techniques such as how to set up their green screen and find proper lighting for their recordings. Junior Kaitlyn Son said that after a semester of practice, she feels more confident with her recording skills.

“I think there’s always room for improvement in our recording just because there’s a lot of technicalities to it,” Son said. “We were really taught a lot about that in the beginning of the year, and I feel like now we sort of got the hang of it.”

Junior Elizabeth Wong said that recording songs independently is a different experience than performing in a group, but the virtual setting makes the performance more accessible.

“Part of why I’m in choir is because I love singing together with others, so it’s a little bit hard to [maintain] the same spirit and energy while recording these pieces individually,” Wong said. “This year is different because everything’s virtual, which makes it a little more interesting to see how the concert comes together. Having a virtual stream … also makes it more convenient to watch and easier to pass around, so hopefully more people will get to see our concert this year.”

According to Kerby, Paly Choirs will perform songs from various time periods and regions, some of which are in foreign languages, as well as widely recognizable pieces, including “O Fortuna” by Carl Orff.

“I’m always super excited to see not only the choirs I participated in, but all the other choirs too,” Son said. “I think starting from the last spring semester, we’ve done a lot of concerts, and each one of them I’ve been very surprised at the end product. They all came out super nicely.”

The Madrigal Feaste will be livestreamed at 7 p.m. Friday on the Paly Choirs Website.