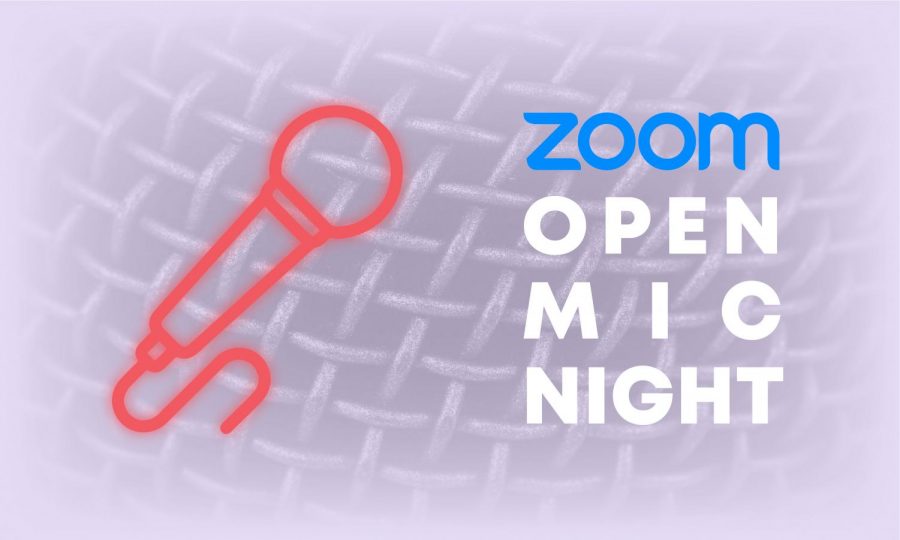 Students can enjoy performances and a raffle during a city-wide virtual open mic night at 7:30 p.m. Saturday. The event will be hosted by four Palo Alto schools — Palo Alto High School, Gunn High School, Castilleja School and Kehillah Jewish High School — along with Teen Arts Council. "Even though it’s hard to get into the holiday spirit during the pandemic, open mic is a great way to kick off Thanksgiving break and connect with people," TAC President Emma Cudahy said. Graphic: Kabir Advani

Representatives from Palo Alto High School, Gunn High School, Castilleja School, Kehillah Jewish High School and Teen Arts Council have met virtually to organize the event, which will be facilitated by adult advisors from each group, according to TAC President and Paly senior Emma Cudahy.

Sophomore Johanna Seah, Paly Associated Student Body clubs commissioner, said she was inspired by the open mic nights that TAC has hosted in the past and proposed Paly host a similar event.

“I’ve always been interested in doing an open mic event, I think even before COVID-19 was affecting us,” Seah said. “I know the Teen Arts Council does a lot of cool events, but I felt like it would also be really great to do it as a school.”

According to Seah, ASB originally only planned on partnering with TAC but realized a larger focus would be necessary.

“They can’t just host things for one school, so we were thinking, ‘Oh, well we still wanted to do this,’” Seah said. “So she [Cudahy] came up with the idea — what if we had the open mic for all the Palo Alto schools, it could be a big Palo Alto event.”

Cudahy said the event will include musical performances, poetry and a performance from Paly’s Comedy Sportz team. In addition, all students who RSVP to the event will automatically be entered into a raffle to win prizes. Each of the five groups hosting the event will provide a prize, all worth $15, according to Cudahy.

Prizes are subject to change based on their availability, but the organizations currently plan on providing holiday drink kits, according to Seah. These kits, such as the proposed chai tea and hot chocolate kits, include supplies so winners can make their own warm drinks at home. Organizers will deliver prizes to winners’ houses, according to Cudahy.

Although TAC has hosted several virtual open mic nights independently this semester, Cudahy said TAC is looking to draw in a wider range of students and create a more inclusive environment by collaborating with other organizations.

“We’re hoping that by hosting this open mic together we’ll be able to start bridging the gap between our typical event attendees and other members of our community that might want to come to an open mic, but never get the opportunity to,” Cudahy said. “By partnering with the schools, we want to show teens that are interested in the arts that literally any high school teenager is invited, and that we would be really excited if they came.”

Seah said she hopes Paly ASB is able to do more events like this in the future.

“I don’t really have any plans at the moment,” Seah said. “But I definitely think, because we’ve had this experience, I would definitely be open to doing this again sometime this year, especially since everything is online.”

Students who wish to attend the event may RSVP here, and those who are looking to perform may sign up here.