Column: Vote for the planet 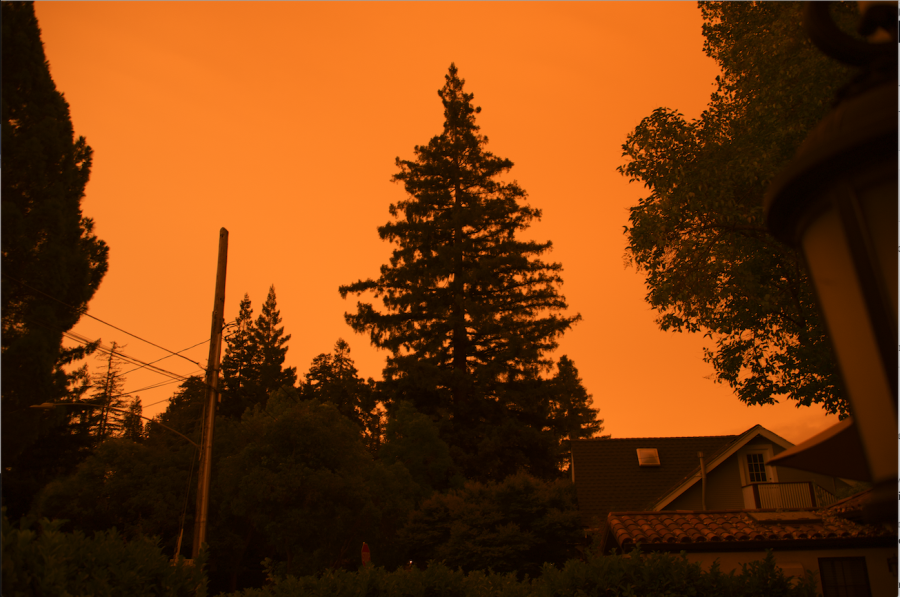 Orange apocalypse for the fall? Following dozens of major fires across California, the atmosphere filled with smoke and left red-orange light to filter through and tint in the sky for multiple days in mid-September. The abnormal weather was not only a sign of the danger of nearby fires, but also a wake-up call to the severity of climate change. Palo Alto High School science teacher Nicole Loomis emphasized the need to shift towards renewables. “Carbon concentration in the atmosphere will continue to increase at a rate that was faster than it would otherwise,” Loomis said, adding that the nation should “reduce reliance on coal.” Photo: Ethan Chen.

Ninety degree highs in mid-October. Fires demolishing millions of acres of California land. Unearthly orange gloom cast over the state for days. The list goes on.

Its effects have been catastrophic — and all too evident in our home state this year.

It is true that our political leaders on a local, state and national level enact the nation’s climate policies. But voters decide these representatives. The ongoing election is an opportunity — a quadrennial one in a time when each day counts — to concentrate efforts on minimizing environmental damage going forward.

As for Biden’s opponent, President Donald Trump? His environmental activism, as of now, has included withdrawing from the Paris Climate Agreement early in his term, a global pact adopted in 2016 to reverse negative climate impacts.

On the other hand, with the current Trump administration policies — or lack thereof — carbon atmospheric concentrations are exponentiating, and will continue to do so barring major shifts in fossil-fuel use and emission legislation as explained by the National Aeronautics and Space Administration.

Yet, in response to such warnings from scientists of the coming devastation of our planet due to rising temperatures, our chief executive is among a handful of the population who dismiss the evidence. He does not “think science knows” the gravity of the climate crisis our planet faces.

“There’s consensus among the scientific community,” Loomis said, “that it [climate change] is happening … and we need to do something about it.”

Not only do our leaders’ actions influence American impacts on the environment, they have worldwide consequence; Loomis said the United States sets an example for others by working to either mitigate or actively ignore environmental damage, whether through the Paris Climate Agreement or more specific policies.

“Other countries will say if we [the United States] are not doing it [supporting climate-conscious efforts], why should they?” Loomis said.

“I am in favor of climate policies that move towards alternative energies and reduce our dependence on fossil fuels,” Brimhall said. “That’s definitely the way to go.”

California, for one, passed Senate Bill 100 in 2018 calling complete clean energy by 2045, as well as implementing cap-and-trade policies to promote conversion to renewable energy. Our representatives have written and enforced these laws to protect the planet. However, in other states, such shifts are not so simple; with Americans employed in the coal mining and gas industries further east, Loomis said backlash will likely result.

“The people who mine coal are not going to like that,” Loomis said. “They are going to lose their jobs … unless you can create a solution where you can make money off of environmentally friendly industries.”

Expanding wind and solar jobs is one solution — for example, by incentivizing renewable energy companies to create alternative local opportunities for those who may become unemployed following coal cutbacks. Bipartisan support could be achieved this way, as economic and environmental benefits check boxes across the aisle — “a win-win,” Loomis said.

Climate policy shifts are just one — albeit crucial — reason to cast a vote in the election. Both regionally and nationally, a vote is a stance for the climate. It is a decision of ignorance or action — with long term implications.

It is a decision to save the planet for your future, and, possibly, for your children’s future.

The extraordinary stream of natural disasters is a signal from our melting Earth — it will not cease fire until we do. And change is completely in our control.

Vote for the planet.