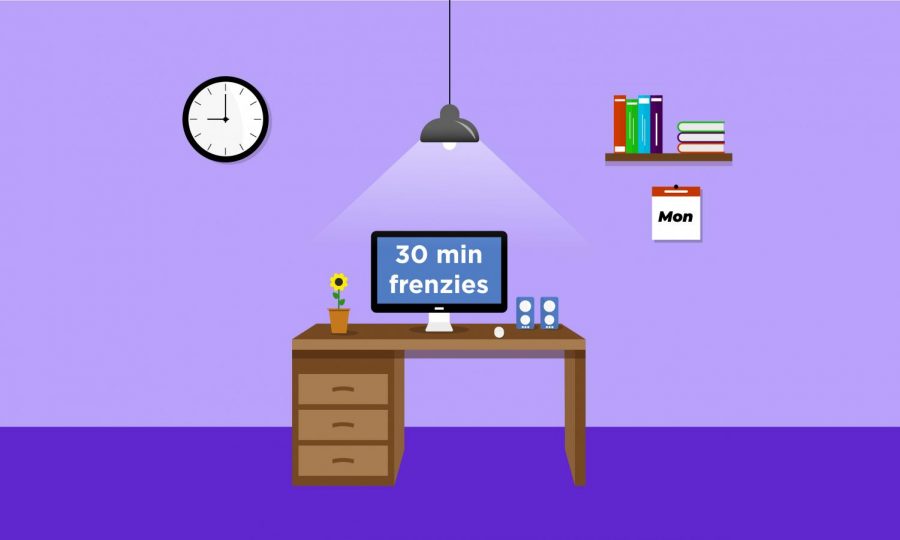 Editor’s Note: The opinion below reflects the majority opinion of The Paly Voice staff.

With the new distance-learning schedule, that’s how many minutes per week students at Palo Alto High School look at a screen to do synchronous work.

Combined with the time needed to do asynchronous work, which for most students is about two to three hours per day, according to a survey by Paly Principal Brent Kline, students look at a screen for approximately 2,185 minutes, or 36 hours, per week — just for school. This system is unconscionable, unhealthy, and unsustainable.

As the second quarter of the 2020-2021 school year unfolds, changes to the distance-learning schedule — particularly to the asynchronous common learning days on Mondays — would further help and support students during this unprecedented era.

In the current schedule, Period 1 through Period 4 are on Tuesdays and Thursdays, while Period 5 through Period 7 are on Wednesdays and Fridays, each period being an hour and 15 minutes long. On Mondays, there is a common learning day with all seven periods, each being only 30 minutes.

“The original intent of the C-days was to give students an overview of what’s expected for the entire week,” Kline said. “They [C-days] are to set you up, prepare you, and maybe answer some clarifying questions.”

Students have a wide range of opinions on C-days. In Kline’s survey, approximately 46% of students rated the C-day schedule below neutral.

Their complaints are varied.

For starters, students say, the 30-minute periods are not a sufficient amount of time for teachers to teach a full concept in great detail without feeling rushed. As a result, C-day periods are often unproductive for both students and teachers.

Finally, after a tiring day of school, students are left with a great amount of homework. Because students have all seven periods on C-days, they are likely to be assigned more homework compared to days with only three or four periods. Homework assigned during periods one through four on Mondays is often due the next day, increasing stress for students.

A potential alternative to the C-day schedule is an asynchronous schedule such as that of Los Altos High School. For Los Altos students, Wednesdays are asynchronous, while other days of the week are synchronous block periods.

According to many Los Altos High School students, the asynchronous day has generally been beneficial to them.

“It’s helpful for me to have that break from constant Zoom calls,” junior Aman Shah said. “I get my morning back, just one day of the week.”

Some teachers, such as English teachers Kindel Launer and Melissa Laptalo, have already implemented asynchronous learning on C-days and have reported satisfaction with the change.

“I spoke with my students early in the semester about their experience with the Monday schedule, and it was clear right away that six to seven back-to-back Zoom meetings weren’t working for them as learners,” Laptalo said.

According to Laptalo, teachers are mandated to begin their classes synchronously. However, they do not need to remain synchronous for the entire period.

“I went with an asynchronous day because it’s more respectful of students and teachers during this distance learning time,” Launer said.

Despite these changes we recommend making to the C-day schedule, there are aspects of the current schedule that many students agree upon and want to maintain, specifically the late start time at 10 a.m. The late start time gives students an opportunity to sleep in, catch up on homework, and eat a healthy breakfast, which many students were not able to do with the 8:20 a.m. start time of previous years.

Critics of the asynchronous C-days say the asynchrony and late start pose a potential problem in meeting the California instructional minute requirement. According to the California Department of Education, the instructional minute requirement for high school students is 240 minutes per day. However, because these minutes include both synchronous and asynchronous minutes, our proposed changes to the C-day schedule would not interfere with the mandatory education of students.

Though the changes that can be made to the C-day schedule are currently limited, Kline continues to hope for more input from the Paly community as to what next steps can be taken.

“We can’t change how it [the C-day schedule] is right now, unless it’s done from a district-wide level,” Kline said. “But we can certainly look at within Paly and how we can expect it to happen and hopefully increase the flexibility of what happens during our seven-period days. I’m all into great ideas and ideas that push the box open a little bit more.”

Are you listening, school board?