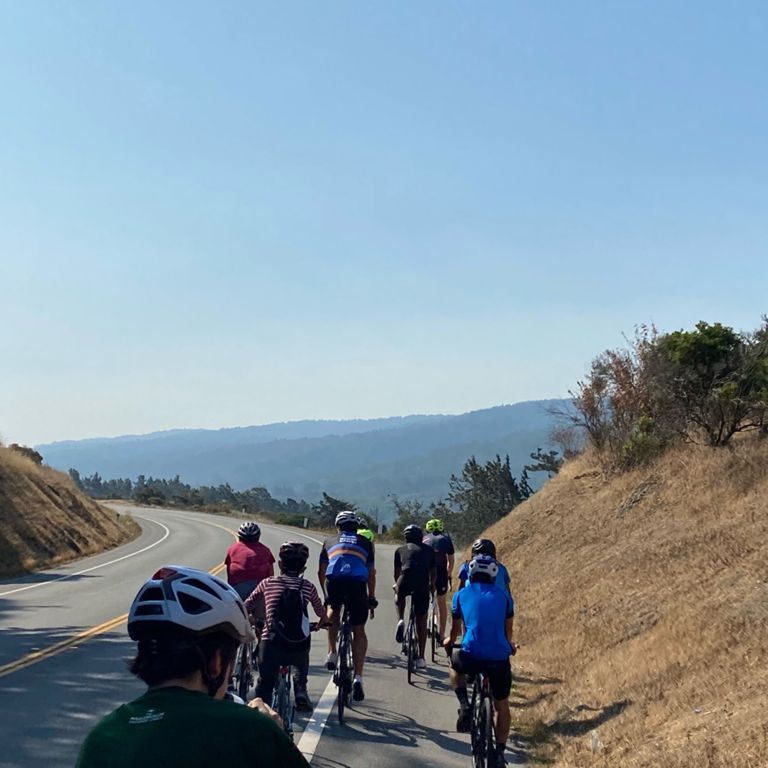 The Paly Road Cycling Club bikes on Cañada Road during its first club meeting. Club members practiced social distancing to mitigate the spread of COVID-19. "It was great to get to know some fellow Paly cyclists," said James Fetter, co-president of the club. "Some people who were inexperienced struggled a little bit, but overall it was a good ride."

On a Sunday morning at 9 a.m., unlike other high schoolers who might be at home due to the pandemic, James Fetter dons his orange Garmin Watch and sets out on his bike to meet the Paly Road Cycling Club for their first weekly ride on Cañada Road. As they near the long stretch of road, everyone dismounts and poses for a photo near Roberts Market.

Paly Road Cycling Club is one of the many clubs that has adjusted its activities due to COVID-19 restrictions. Weeks after a virtual Club Day, Palo Alto High School clubs are now meeting through Zoom and engaging in creative lunch-time activities that have been fitted to the new online environment.

“The good thing about cycling is that it’s pretty safe regarding COVID, as it’s all outside and usually you can ride next to someone 6 feet apart without too much trouble,” Fetter stated in an email to The Paly Voice.

Paly Eats co-President Amanda Yun said she believes starting a new club in an online environment is easier than trying to adjust activities in pre-existing clubs.

“Since we started this club during a time of full online school, we tailored the club to fit the circumstances,” Yun stated in an email to The Paly Voice. “We are planning to vote on different restaurants and cuisines to try, host discussions about food, do some fun Kahoots, have some guest speakers, and cover food-related topics such as cooking tips and possibly sustainable farming and/or nutrition.”

Despite being unable to meet in-person, students still have access to a wide range of clubs, according to co-Presidents of PALYCE (Paly Kpop Club) and Chamber Musician Club. These Club co-Presidents have run into challenges with the transition from in-person to online, but have come up with alternative ideas.

Michelle Kim, PALYCE club co-President, said her club cannot teach K-pop dances to its members as they did in previous years.

“We’ve adjusted by planning online activities such as video watching, learning dances through recorded tutorials, karaoke and more,” Kim stated in an email to The Paly Voice. “Planned performances will likely be replaced by individual dance recordings published on our social media pages.”

Annika Viswesh, Chamber Musician Club co-president, said her club plans to do activities similar to the ones they did during school closure in March.

“After the lockdown, we adapted very quickly,” Viswesh stated in an email to The Paly Voice. “We asked our club members to record solo performances, and some even recorded chamber groups remotely. Emma and I then prepared a YouTube playlist out of it and sent it to two retirement homes for patrons to view it at their convenience.”

Emma Cardwell, Chamber Musician Club co-President, has several activities planned to fit the online environment. These activities include playing collaborative music by stacking individually recorded videos and setting up short virtual performance sessions for club members to play for each other.

“I think that it’s probably the best that could be done regarding the situation,” Fetter stated. “Regardless, I’m looking forward to meeting some fellow Paly cyclists.”