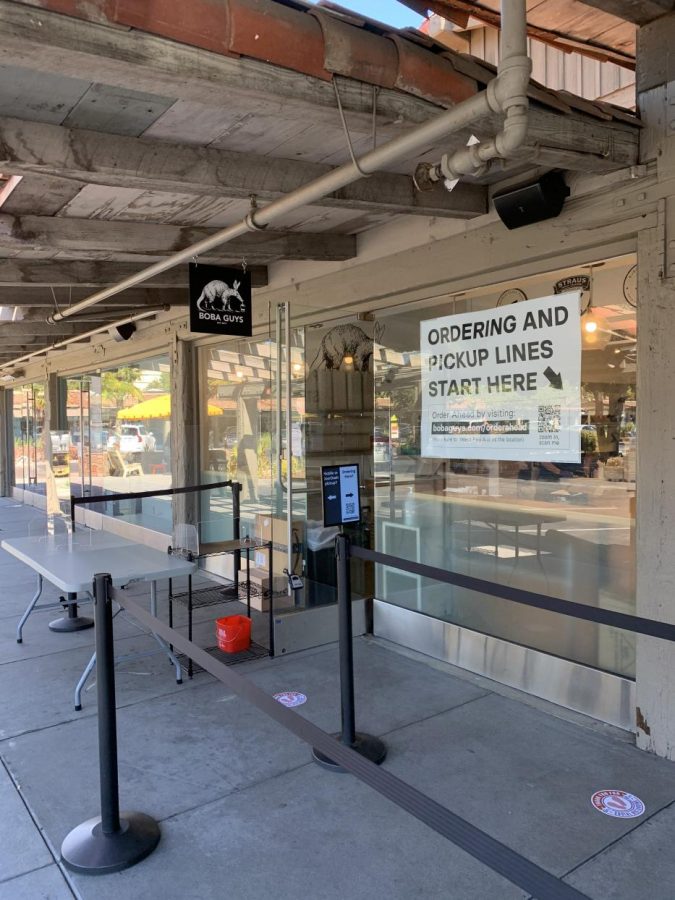 Boba Guys in Palo Alto's Town and Country over a year ago. Due to COVID-19, Boba Guys is taking large counter measures to prevent spreading, according to co-founder Andrew Chau. “We shut down our stores early during COVID-19," said Chau [[Chau said]], "From then to now, we try to make public safety a priority” Photo: Boba Guys Inc. [[Just a heads up, Kandell might not let you use this photo. If I were you, I'd go to the store and take a photo yourself, even if it's from outside. It might not be as good of a photo, but it will get approved]]

Businesses in Town & Country Shopping Village, neighbor of Palo Alto High School, are under financial stress due to the lack of Paly students caused by COVID-19.

Weekday lunch sales for Sushi House, a Japanese restaurant at Town and Country, are down 20-25% this school year, compared to last year, according to Kenji Ueki, founder of Sushi House. Remote learning at Paly is one of the many factors causing this decline, he added.

“Since mid-March, operating as take-out only, we have tried working with various meal-ordering/delivery services (DoorDash, GrubHub, etc.) but had to stop due to high commissions and lack of tips,” Ueki stated in an email to The Paly Voice.

Today, the restaurant relies on walk-in and phone orders to stay afloat, he added.

Sushi House has not had to lay off any full-time employees since the lockdown began, according to Ueki. The restaurant has been able to withstand several other economic recessions in the 32 years it has been active. Ueki attributes this long-term success to the kindness and support of the Palo Alto community, and says he will continue to explore more ways to recover from losses.

“We are working on adding an online ordering system on our website and are hoping it will help,” Ueki said.

Currently, Sushi House does not do online deliveries by itself.

Boba Guys, another Town & Country business, has also been severely impacted by the pandemic.

Boba Guys, which has 18 stores across the nation, laid off 400 team members in March alone, according to Boba Guys founders Andrew Chau and Bin Chen.

“At first when the shelter-in-place rules hit, we didn’t know if we were going to be able to stay and that’s coming from a sizable company,” Chau stated in an email to The Paly Voice. “What people forget is that we’re not backed by venture capital, so it’s all personal and friends’ money helping keep us alive during this time. We know many businesses went under over the last six months which is just sad.”

The popular boba shop has made drastic changes to their policies, such as creating a contactless business model that requires all customers to order through an app or mobile website.

Chau said Boba Guys has taken extreme measures to control the spread of COVID-19, enforcing temperature checking on employees, contact tracing cards that track people’s interactions, and preventing clustering. They have also shrunk down their menu to reduce lines, thus protecting public safety, according to Chau.

“With the fires, there’s another element where people don’t want to be outside for long,” Chau said. “We are known for our long lines– just imagine if we had a larger menu. They would get even longer!”

During the pandemic, Boba Guys has found more success in two of their products: The Boba Book, a cookbook filled with recipes for various types of bubble tea, and at-home boba kits, that include boba ingredients.

“We honestly did those projects on the side not knowing they would be critical to keeping us afloat during a pandemic,” Chau said.

Over the past six months, small businesses throughout the U.S. have been severely impacted by the COVID-19 pandemic. Employment rates have plummeted and businesses across the nation have been closed down. Unemployment in Santa Clara County reached 11.7% in April, up from just 2.2% in January, according to the Employment Development Department of California.

“We’ll continue to see a higher level of care to sanitation and distancing,” Ueki said. “Business at [Town and Country Shopping Village] looks like it is slowly coming back, but I fear there may be some shops that may not make it to the end of the year.”