Speech and Debate kicks off its season with virtual win 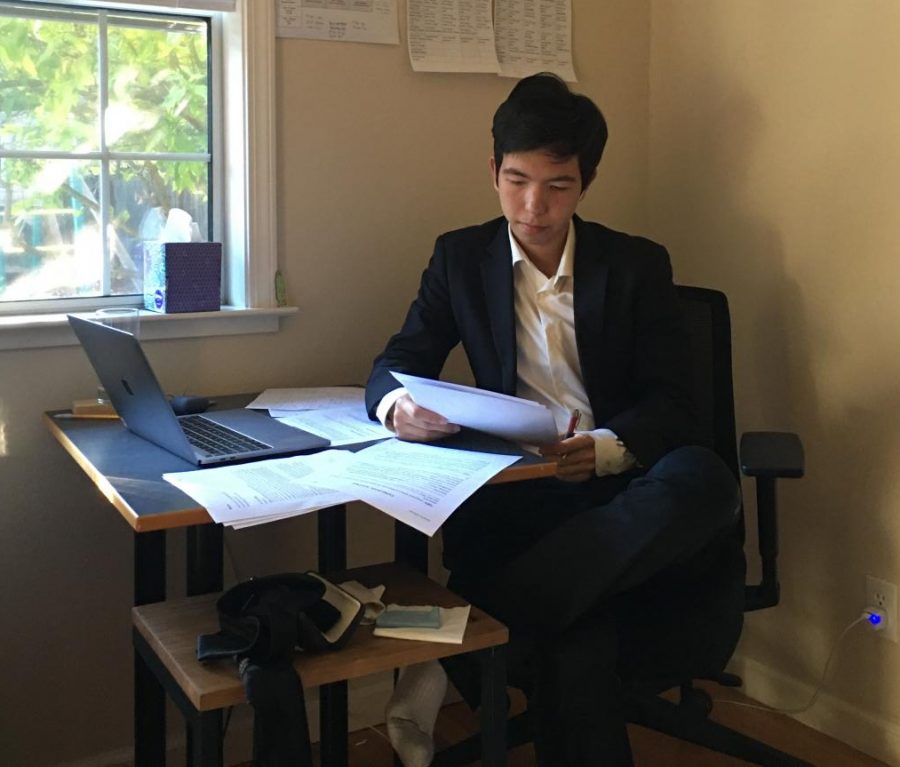 Delivering a speech to a webcam isn’t what most people think of when it comes to speech and debate, but sophomore Ethan Boneh had to do just that on Sunday at the virtual Jack Howe Invitational due restrictions required by the COVID-19 virus response.

“Debating online has a different feel to it,” Boneh said. “You are much closer to your judge online, so you need to adjust your speaking style to fit. At the same time, your opponent isn’t personally close to you, as you are in your house talking at your computer, which gives it a slightly different feel.”

Boneh was one of 14 debaters Palo Alto High School sent to compete against strong teams from California and other states all over the U.S. The team performed “extremely well” in both speech and debate events, according to Speech and Debate Program Director Jennie Savage.

Sophomore Katie Firtch placed first in the Original Oratory speech event, a first for the team in 16 years. Sophomore Ethan Boneh advanced to semifinals in the Impromptu speech event. Both Firtch and Boneh had never competed in their respective events prior to the tournament.

Firtch, who previously did Congressional debate, said she did not expect to place first since this was her first time competing in a speech event.

“When I delivered my speech, I accidentally omitted a whole paragraph, but I acted like I didn’t,” Firtch said. “I think that helped me land first. The girl who I thought might beat me, I actually managed to surpass by 1 point. … When the news arrived, my coach called me and we screamed at each other over the phone for a full minute in sheer joy.”

The team had a strong performance in the debate categories as well, according to Savage. Sophomore Claire Chen progressed into the double octofinals for Lincoln Douglas debate. Seniors Jenni Solgaard, Alex Selwyn and Andrew Brodbeck, as well as sophomore Lucas Guan, reached the semifinals in Congressional debate.

Congress debaters had to make slight adjustments to their speeches with the competition being online due to COVID-19, according to Brodbeck.

“I still miss the ease of using movement and gestures for in-person speeches, but it seemed like everyone else was in the same boat,” Brodbeck stated in a text message. “I had some minor lag issues at times, but overall it went pretty smoothly.”

Similar to Brodbeck, Firtch said the virtual aspect affected the overall environment of the competition.

“The tournament atmosphere was more rigid and chilly than it would have been had we been in the same physical room, simply due to everyone adjusting to the new format,” Firtch said. “The speeches I witnessed and delivered were still very fluid, however, and totally up to traditional competition standards.”

According to Savage, the team usually attends competitions toward the end of September. However, due to the high skill level of the debaters on the current team and the benefits of online tournaments, she decided to have it compete a few weeks earlier.

“Now that we are competing online and we don’t have to travel, it’s easier to attend more competitions,” Savage said. “The current team is so strong that I felt they were ready earlier.”

Prior to the start of school, the team had been preparing for these competitions online through weekly Zoom meetings. According to Savage, the team has become more cohesive since meeting online.

“Since moving online, the team has decreased in size,” Savage said. “The [veteran] debaters are dedicated to their craft. It’s a very small, intimate and close-knit community. They are all so supportive of each other, despite sometimes competing with each other.”

Despite lack of physical face-to-face interaction, the team feels the same, according to Boneh.

“It’s not the biggest change [to online],” Boneh said. “We still jump into warm-up rooms during breaks to talk about what’s happened, run drills, crack jokes and screw around. We’re still collaborating and cheering everyone on.”

The team has nine paid professional coaches, but has received additional help from alumni of the Speech and Debate team, according to Savage.

“Many of my graduating seniors who are in their second or third years of college are at home and taking online classes,” Savage said. “They are volunteering to be coaches, so our coach-to-debater ratio has decreased. Each debater gets more individualized attention.”

Boneh said the alumni coaches provide more feedback in a new perspective to his speeches.

“We’ve had several alumni coaches come in occasionally and judge practice rounds,” Boneh said. “It’s interesting to hear them compare and contrast how things were different for them when they were debaters. It’s also great to hear them give their takes on our arguments, because it gives us nice exposure to other potential angles on the topic.”

Currently, the team is holding novice recruitment to any Paly students who would like to participate. To find out more about the Paly Speech and Debate team, sign up for its mailing list. Next on its agenda, the team will virtually attend the Stephen Steward Invitational on Friday, Yale Invitational on Oct. 2-4, and Voice International Tournament on Oct. 10-11.