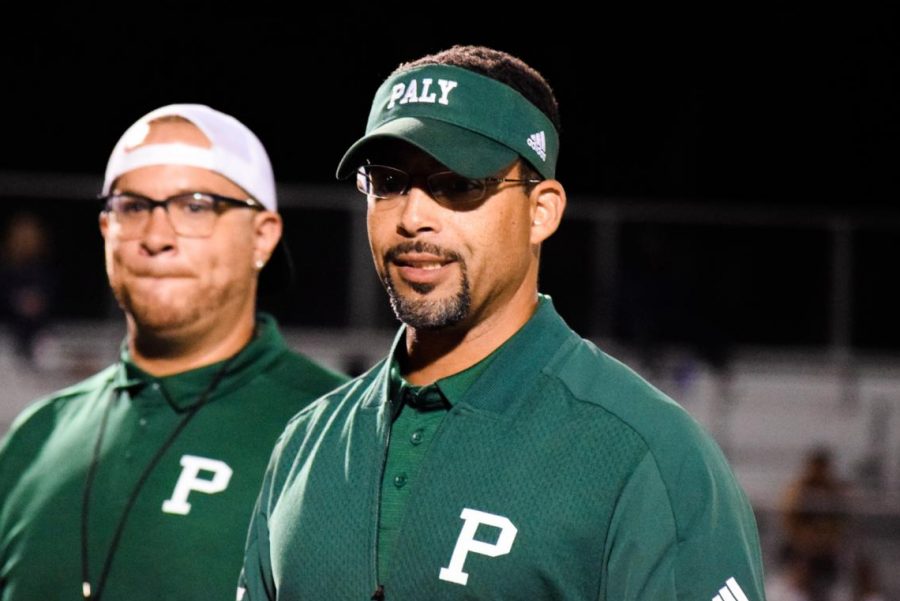 Athletic Director and Varsity Football Coach Nelson Gifford congratulates the Palo Alto High School varsity football team for a victory during the 2019 season at Viking Stadium. Over the summer, some Palo Alto Unified School District campuses reopened for socially distanced summer conditioning and several athletic teams at Paly held practices for five weeks before the Santa Clara County prohibited athletics activities. As athletics and the county start to reopen again, Gifford said he believes that contact sports will be able to play if in-person instruction begins. "If we can teach in a classroom in an enclosed environment, we should be able to do these contact sports," Gifford said. "We believe they kind of go hand in hand." Photo: Amy Yu

Athletic conditioning will start again Sept. 14, according to a statement released at 2 p.m. today on the Palo Alto High School Athletics website.

According to the statement, all workouts will be conducted outside in cohorts of 12 with masks and health screening protocols required at every practice. To reduce contact infection risks, locker rooms will not be opened, equipment will not be shared and students are required to bring their own water bottles. Bathrooms will be available for one athlete at a time, and students who change cohorts will be expected to wait three weeks before joining another cohort.

“It will be important to note that we ask all our students-athletes to refrain from socializing on campus before or after workouts,” Athletic Director Nelson Gifford stated. “While we understand it will be very natural for our students and coaches to want to bond and share, it is important that we all do our part to ensure our return to play is both fun and safe… We are in this together.”

Gifford, who is also the school’s varsity football coach, told The Paly Voice Friday that he has been working with various administrative personnel at the school and district level to ensure the reopening for sports is as safe as possible. The administration’s efforts toward finding ways to return to play have demonstrated that they understand the value of sports for students, according to Gifford.

“I have been really happy with the level of communication that has been given toward that [athletics],” Gifford said. “Half of our student body participates in athletics, so they [administrators] understand that it is a meaningful part of the educational experience.”

However, this season of sports presents new challenges with widespread risk of COVID-19, according to the California for All statistics. The California Interscholastic Federation is concerned about wrestling and basketball because of the close nature of these sports and inability to put physical barriers or space between athletes, according to Gifford.

“The two biggest sports they [the CIF] had issues with were wrestling, which is pretty clear, but it was actually basketball, not football,” Gifford said. “When you think about basketball — super close quarters, people touching each other all the time — and you can’t wear anything on your face.”

However, sports like football and water polo allow for either a physical barrier or distancing policies to be implemented, Gifford said.

“In football, they’ve added face shields, and there are literal physical barriers that we can put in front of the athletes that hopefully prevents transmission of fluids,” Gifford said. “In swimming and baseball, there’s a lot of physical distance.”

Gifford said he plans on following the guidelines set by the Centers of Disease Control and Prevention as well as the California Health Department; however, he sympathizes with the students who may not be able to compete this year.

“If they [the CDC and CHD] say we can play, we’ll want to play,” Gifford said. “If they say we can’t play, we can’t play, but in high school, you get four years to play. I really want this to happen for all of you because what’s gone is gone forever.”

According to the CIF Central Coast Region website, fall sports are scheduled to start Dec. 14. Fall student athletes in the Class of 2021 who are looking to get recruited to play in college may be affected by this shift; however, Gifford said colleges will have to wait for Californian student athletes to start their seasons.

“California kind of sets the policies for the rest of the country, and the same is going to be true in athletics,” Gifford said. “If I’m a college and I need to go to a place to recruit top tier athletes, I have to go to California. That’s where the talent is.”

The athletics department has also been looking into keeping spectators safe by streaming games online, according to Gifford.

“We already have two cameras set up: one in the big gym, and another one on the football field,” Gifford said. “We would like to see if we can afford it, but an investment in being able to do live streaming is actually really just an investment in the future. There are Paly alumni and family members that want to see their nieces, nephews, and grandchildren play.”

Sports broadcasting opens up opportunities for students to get involved with athletics in a non-traditional way, according to Gifford.

“Perhaps there could be sports broadcasting that students can be involved in,” Gifford said. “If we do it right, we can actually broadcast all sports. That’s also exciting because now it becomes another environment for students to be able to develop real world skills.”

Despite the uncertainty surrounding the future of high school sports, Gifford said he is hopeful for the possibility to play.

“Countries outside of the U.S. that have been able to return to instruction, sports and to some degree of normalcy by slowing the infection rate,” Gifford said, “I’m hoping that everyone here is taking that [the social distance measures] seriously and doing what they need to do so that we can get back to our normal way of life.”