Local journalism in the age of COVID-19

What to do when ad revenues fall, but the public needs information 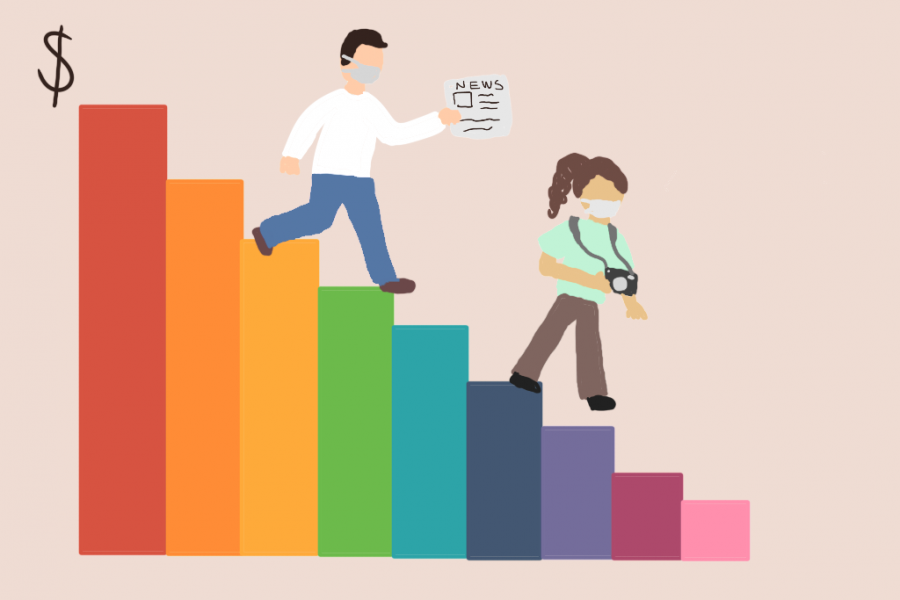 For many newspapers around the United States, the future of journalism is facing heavy doubts. In an age of shelter-in-place orders, falling advertisement revenue and pre-existing declines in circulation, many are wondering if COVID-19 is placing the future of local journalism in further peril.

For peninsula news organizations, adapting to this new environment is critical.

Even before the coronavirus pandemic, the aggregate weekday circulation of all US news organizations declined by an estimated 8% between 2017 and 2018 — ad revenue similarly decreased by an estimated 13%. Now, as the coronavirus continues to pound the nation, this trend is only growing.
Advertisers closing up shop
In the Bay Area, local publications are not immune to the economic impacts of the pandemic.

“When stores and businesses had to close, they were no longer advertising,” Palo Alto Weekly editor Jocelyn Dong said. “So, our revenue dropped substantially and immediately.”

However, even as print circulations decrease, Palo Alto’s news organizations see their mission as critical to people looking for reliable local news, as for readers, finding timely, local information is essential.

“We’re all concerned with what is happening in our backyards,” Dong said. “People want to know ‘Am I able to go golf,’ ‘Am I able to go for a hike without wearing a mask,’ so I think they [local readers] are consuming local news to a greater degree than before when some of the issues didn’t seem as pressing.”

Although print circulation contracts, Internet traffic is bursting. At the Daily Post, a traditional, mostly-print publication, online readership has “skyrocketed,” Price stated. According to Dong, the Palo Alto Weekly has likewise seen a dramatic uptick in online traffic. However, the sudden increased interest in online readership presents an ethical challenge to a news organization attempting to stay afloat.

“We did start noticing that there was a huge interest in the coronavirus stories that we were publishing, and some people were running into our paywall and sending us emails asking ‘Please take down the paywall, we think it’s a public service for you to allow your articles to be read by anybody,'” Dong said.

For a company relying increasingly on subscriber fees, this was a difficult decision to make, Dong said. But, by early March, the Weekly announced they were temporarily removing their paywall, casting aside the potential revenue of the multitude of new readers.

“In the end, we realized this was a huge public service that we were offering and we needed to be able to give people access when they needed it,” Dong said.

The Weekly re-enabled its paywall last Friday, so readers now have a cap on how many free stories they can access. According to Dong, the most important messages about how to stay safe are already out there.

“Hopefully, [we] communicate to people that we need them to value content by paying for it and we can’t sustain our business if we continue to give away content for free,” Dong said.
The changing business model?
With less advertising and less incentive to subscribe, the Weekly faced a dilemma on how to continue to pay reporters, manage their circulation and provide information to the public. So, it went to their readers and asked them to subscribe.

“We have seen subscriberships rise quite healthily in the past couple months, which is gratifying and shows us there is value in what we’re doing,” Dong said. “People are recognizing that journalism’s business model is changing, and it has to change because this is a trend that we’ve been on for twenty years.”

Around the country, newspapers staring in the face of declining advertisement revenue are being forced to rethink their business model. In the place of ads — subscriptions.

“Papers like the New York Times, the Washington Post and even down to small community papers are all considering whether or not subscriber revenues can make up for the loss of advertising,” Dong said.

Breaking the mold, however, is the Daily Post. Trading its significantly lower online presence with a reliance on its free print paper, the push towards a subscriber business model is not palatable at all.

“The Post’s share of the local advertising market has been growing over the last several years,” Price stated. “We’re the largest circulation newspaper in Palo Alto and we have the most advertising. We don’t plan to make any changes.”

For Price, the readership of his paper is changing, but its reliance on free, widespread circulation — and the print advertisements that keep it afloat — is not.

“Prior to the shutdown, most of the copies of the Daily Post were read in the workplace,” Price stated, later adding, “With the shutdown of non-essential workplaces, the Post is being picked up by residents who are bringing the newspaper home with them. Despite this change, our advertisers are reporting that they’re getting good results by being in the Post.”
The responsibility of reporting the news
America’s local journalists are facing a tough road ahead. It will likely be difficult to navigate and at times unpredictable. But, if the age of COVID-19 has shown us anything, it’s the value of information.

“We realize that for many people, we are their only source of local news,” Price stated. “That’s a responsibility we take seriously.”

As the pandemic sweeps across the country, so too will be the journalists following close behind.

“I am proud to be apart of this profession,” Dong said. “Its a crisis like this that really makes you value what you’re doing.”