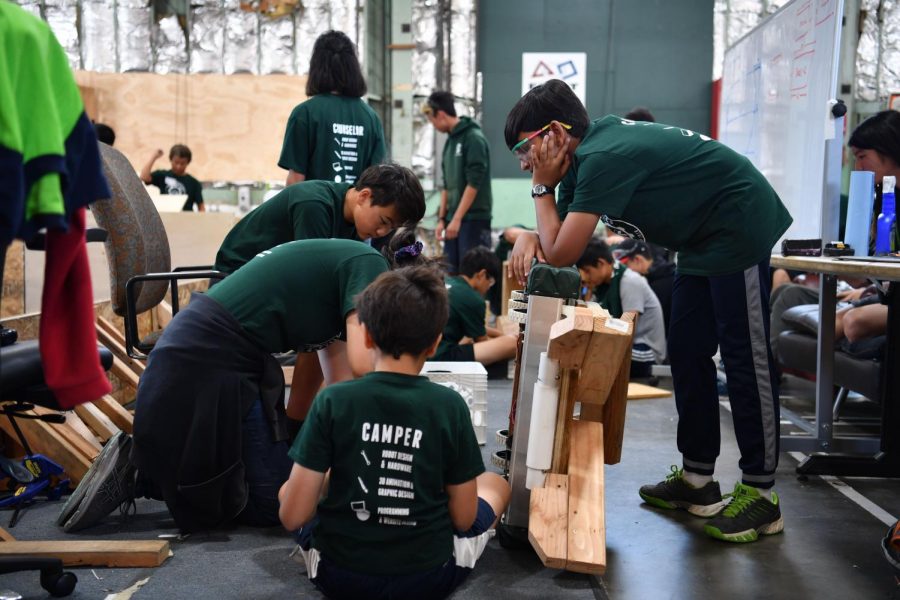 Amid the COVID-19 pandemic, multiple student-run Palo Alto High School programs that have traditionally hosted in-person summer camps are either transitioning online, have been cancelled, or are still in the midst of deciding how to proceed during these uncertain times.

To find out how different student organizations are adapting, The Paly Voice interviewed student members of the Speech and Debate team, the Robotics team, the Science Olympiad team, Camp MAC, and the Math Club.

The Palo Alto High School Speech and Debate Camp, which is normally hosted at Paly and led by Paly’s Speach and Debate team, will take place via Zoom this year due to COVID-19.

The camps are open to students ages 10 to 16 and will take place from June 8 to 12 and June 15 to 19. Although the camp normally costs $350 per week for either the Speech or Debate program, this year the price per camper has been reduced to $250 per week.

According to Speech and Debate coach Jennie Savage, the summer camp is an important source of revenue which goes towards paying the team’s assistant coaches and helps fund travel costs, supplies and registration for tournaments. Savage says she does not expect that moving the camp online will impact the team’s finances.

“We don’t anticipate a significant decrease in camp earnings this year, and due to careful and diligent management of funds from previous years, we have a surplus going into this year anyway, so we’re all set,” Savage stated in a message to The Paly Voice.

According to co-Camp Director and junior Benjamin Stein, the camp usually has a waiting list, but until recently, the camp had experienced a decrease in sign-ups. However, Stein says that as summer approaches, the camp has received a sudden increase in registrations.

“As of late, we’ve seen a real boost in registrations so I’m hopeful and happy about where we are now,” Stein said. “I think that as we get closer to the first day of camp, we’ll be at normal-ish numbers.”

According to Stein, the camp not only acts as a source of income for the team, but also helps with recruitment.

“We help introduce middle school-aged kids around here to debate and speech, and in doing so we help recruit for the team, which is awesome,” Stein said. “A lot of our debaters have gone through that camp.”

Stein said that although the curriculum of the camp will not change and can easily be converted for an online platform, maintaining a fun and interactive camp experience will be a challenge.

“One of the key things about camp is we want it to not feel like school,” Stein said. “What we’ve been doing is brainstorming lists of games and interactive things that can be done over Zoom. It’s been a struggle to really encapsulate that camp experience in an online media.”

For more information about the Speech and Debate summer camp, visit this website.

In the wake of the COVID-19 pandemic, Team 8 Paly Robotics is hosting online workshops instead of their typical in-person summer camp.

“This annual camp has been an important part of how Paly Robotics provides learning experiences to students of the community, and has been a fun way for students to get involved with robotics in a FIRST [For Inspiration and Recognition of Science and Technology] environment,” Shingal and Zhang stated.

Paly Robotics is offering online Zoom workshops free of charge to all interested students. Shingal said that Paly Robotics has scheduled an entrepreneurship workshop with plans for a software workshop in progress.

“Lessons will be held completely virtually throughout the summer, and will cover a variety of STEAM related topics,” Shingal and Zhang stated. “We planned a curriculum that would not only have students learn something new, but also have them engaged and having fun in unique robotics learning experiences.”

Shingal said that each workshop session is only a few hours long, while the typical summer camp is one week.

“We wanted to make our Zoom classes more flexible for students, so we decided to focus them more on improving individual skills through specifically tailored lessons rather than a weeklong project,” Shingal stated.

Although Paly Robotics typically depends on income from summer camp to fund their upcoming season, Shingal said that they will be pursuing other opportunities to bridge the gap in revenue.

“We understand that everyone is affected by this current crisis, and as a team, we are working to adjust in order to prepare for the coming season,” Shingal stated.

Information about the Paly Robotics summer workshops can be found on their website.

The Science Olympiad team, which normally hosts a week-long science camp in July, has yet to decide whether to move the camp online or cancel it completely.

The camp is open to incoming 7th through 9th graders, and usually takes place at Paly.

According to junior and Co-President Hannah Zhou, the camp will most likely not happen in-person, but the team is considering moving it online.

However, Zhou said that the camp usually consists of hands-on activities, such as dissections and fake crime scenes, which would be excluded if the camp was moved online.

“We tossed around the idea of creating worksheets or something along those lines, but that isn’t nearly as exciting,” Zhou stated.

Usually, the camp charges $350 per camper, which goes towards covering costs for engineering projects, transportation and registration for tournaments. It is unclear how pricing will change, as plans for the camp are still up in the air.

Despite hopes to run an in-person camp this year, Paly’s journalism-focused Camp MAC recently made the decision to shift their summer camp online.

According to Camp Mac’s Chief Communications Officer and junior Kimi Lillios, Camp MAC was initially looking to host an in-person camp, but came to the conclusion that it would not get permission from the district and that people would likely be uncomfortable gathering in large groups.

“We thought that it would be beneficial to everyone to move it online and focus our efforts on making the camp as successful as it can be as a digital camp,” Lillios said.

Lillios said that in the past, most of Camp MAC’s curriculum relied on a traditional, in-person camp, but they are working on adapting it for this year.

“We don’t think it’s logical to have our camp run as long as it normally does in one sitting because being online, burnout is a really real problem,” Lillios said. “And we obviously want to make camp as as practical and as fun as possible.”

Instead of the traditional whole-day camp, Camp MAC will instead have two sessions, one in the morning and one in the late afternoon and early evening, with a break in between where campers aren’t doing camp work, Lillios said.

With the elimination of food and facilities needs, Lillios said that the price for the camp will decrease as well.

“This is out of recognition that we are not having physical supervision nor burn nor paying for food, which is a large part of our operations cost,” Lillios said.

According to Lillios, Camp MAC hopes to bring in workshops run by MAC teachers, guest speakers, as well as panels run by students and staff.

“In previous years, we really just focused on the journalism aspect, but this year we’ve actually been presented with a lot of new opportunities, one of which is involving other MAC programs,” Lillios said.

According to Lillios, there are still many obstacles to overcome in the planning of Camp MAC, as March and April are typically the months with peak registration.

“Now that we are officially going online, we’re going to make a big push of publicity and hopefully get our registrations up,” Lillios said. “Regardless of how many campers we actually get, our camp is now really flexible and we’ll be able to run a successful camp, no matter how many registrants there are.”

Lillios said that although cancelling the in-person camp presented itself as a loss, moving the camp online has also created new opportunities.

“We have so many new opportunities and new options to explore that I think are that are really exciting and are going to make camp just that much more special this year,” Lillios said.

Paly’s Math Club will not be running an in-person or online camp this year, but it will be providing handouts and resources for students to hone their math skills over the summer.

Zhang said Math Club is looking to produce the best and most flexible alternatives to an in-person camp as possible by moving traditionally taught concepts online.

“We’re preparing handouts on the aforementioned Math Camp topics and putting them out for free,” Zhang stated.

Math Club is looking for volunteers with competition math experience to assist it in developing these handouts, according to Zhang. Anyone interested can contact the club at [email protected]