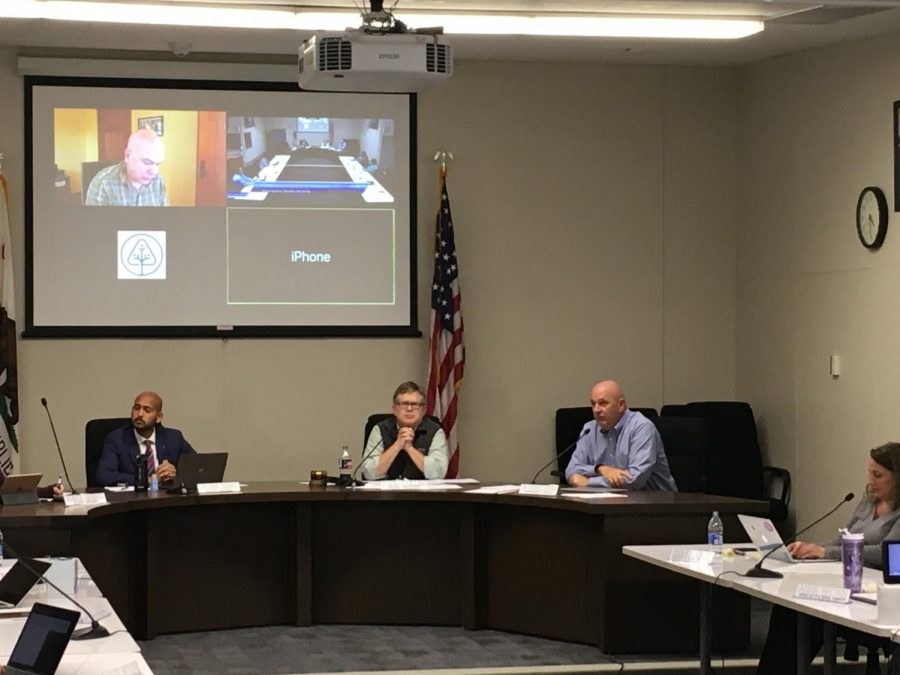 Editor’s Note: An updated article on COVID-19 closures can be found here.

Families choosing to keep students home due to fears of contracting or spreading COVID-19 will be provided options for at-home “flexible learning”; however, schools will remain open and absences are discouraged, Palo Alto Unified School District Superintendent Don Austin announced at an emergency Board of Education meeting Thursday.

“Flexible learning,” Austin said, would allow students to complete modified coursework from home if they choose to be absent due to fears relating to the coronavirus. Beginning March 16, the district will allow excused absences for this type of up to 10 days; however, families can renew the 10-day absence period if they choose, according to a district letter sent to parents.

“Flexible learning,” while now being allowed by the district, is not recommended, Austin said.

“Coming to school is still the best option,” Austin said during the meeting, later adding: “it [‘flexible learning’] will not match the classroom instruction being lost.”

The decision to allow “flexible learning” comes on the heels of district administration remaining tight-lipped about attendance numbers as anxiety spreads and the number of COVID-19 cases in Santa Clara County rises to 66.

While not specifying a timeframe, Austin said attendance across PAUSD secondary schools is upwards of 97%; however, that number is likely to decline as more families choose to keep their students at home.

While conceding that the district is ill-prepared for the possibility of school closures, district leadership defended their decision to keep schools open.

“We are not in a position to replicate classroom instruction virtually at this time,” Austin said, later adding: “we’re really poorly positioned for school closures. … We will be someday, but not in the short-term.”

In light of a growing movement to close Palo Alto schools, including a petition with over 3,700 signatures, district officials reiterated that keeping schools open is safer for students and the community.

Allowing students into the community who do not necessarily self-isolate could put students at at an increased risk, Assistant Superintendent Yolanda Conaway said. Because schools can implement social distancing and other practices, Conaway said that keeping schools open is still the safest option.

Even if a student or staff member tests positive for the coronavirus, schools will not necessarily close, Austin said. While they would immediately contact county health officials, the district would consider whether isolating exposed students would be sufficient.

“There is no pre-determined trigger [for school closures],” Austin said.

If schools did close on mandate or recommendation from Santa Clara County, there would be no requirement to add school days, Austin said. The district would instead rely on a waiver from the state of California granting PAUSD permission to not meet the minimum amount of instructional minutes.

Correction: An earlier version of this story incorrectly attributed information about the number of students in the district to Yolanda Conaway instead of Don Austin. The Paly Voice regrets the error.