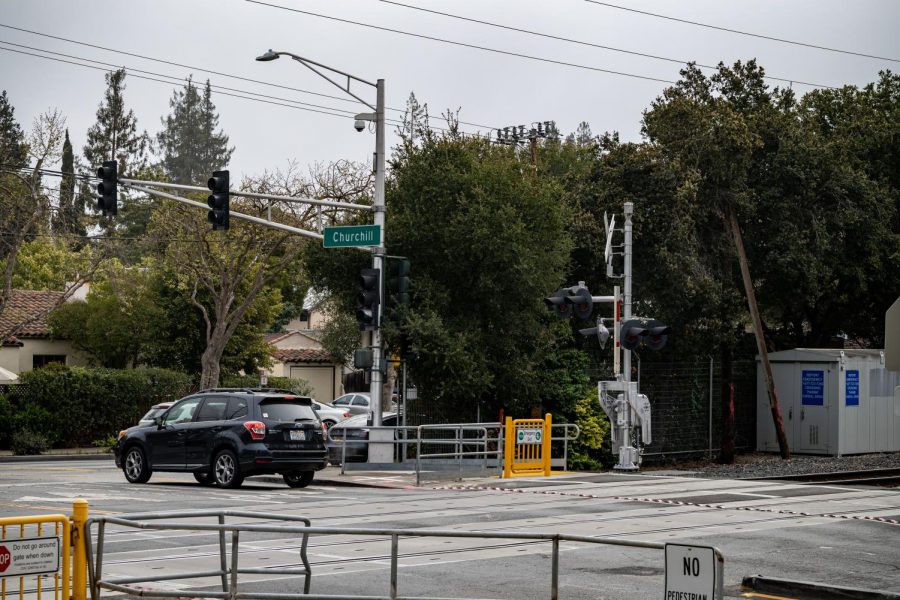 Palo Alto, we have a problem. Trains coming through the city are scheduled to increase in frequency in coming years, further impacting the long-known traffic congestion at Churchill Avenue, one of the main arteries to Palo Alto High School.

Currently, many students’ everyday commute is frustrating due to the Churchill problem. Because there is no grade separation between Churchill and Caltrain, trains stop cars from turning during green lights. As a result, it can take as long as 20 minutes to turn left off of Alma Street onto Churchill. For bikers and pedestrians, the current arrangement of lanes and walkways is also terrible, making it very dangerous to commute in the congested environment.

In the future, these challenges will get worse when Caltrain starts implementing electrification and increasing the frequency of trains. For this reason, the City Council urgently needs to take action, and to stop procrastinating on a decade-long issue.

Starting nearly two years ago, the City Council has constantly been throwing ideas out the window. But to this day, it has failed to find a suitable plan for the Churchill crossing. Thankfully, Southgate resident Michael Price who has stated, “All the alternatives on the table stink,” has developed a revolutionary plan that should deserve a great deal of support.

Existing options and their flaws

To understand Price’s plan, one must first understand the problems of existing options: a closure and a viaduct.

While some rightly believe a closure would minimize traffic in that area by separating all three types of transportation, a blockade would only redirect the traffic to other areas. In other words, Churchill is one of only three streets that connects El Camino and Alma in the area, and blocking it off only forces cars to pile up on the other two street connectors: Embarcadero Road and Oregon Expressway, both which are also crowded normally.

For Palo Alto High School students, with the Churchill entrance no longer available, and El Camino and Embarcadero entrances both acting as congested routes for cars, who knows how long it would take them to get to school.

This is a true grade separation alternative to separate Caltrain, but having to elevate tracks over the view of backyards would interfere with the privacy of many residents. A temporary track also takes up space, reducing road size for vehicles.

Most notably, the main problem with a viaduct is Caltrain’s requirements, which prefers a maximum grade of one percent. A non-standard grade of 1.6 percent would be required on the Palo Alto tracks, which would lead to potential disagreement. Besides, an elevated train also distributes noise more widely and radically transforms the visual landscape in Palo Alto.

So Price isn’t wrong. Why even bother with these options? Instead, he came up with his own design.

While not being able to cross from one side of Churchill to the other also appears as a problem, it is actually intentional. Cars will be forced to turn onto Alma instead, reducing traffic congestion on both sides. For cars that need to get back on Churchill, they can make a u-turn and follow up with a turn after. Price’s solution not only incorporates the idea of a partial closure to minimize traffic at Churchill, but in addition, allows complete access from west Churchill to Alma.

Most importantly, the main goal of safely separating all three modes of transportation would be achieved. Cars would now be able to turn during green lights under train movement, and bikers and pedestrians would be safely traveling on a bridge above all dangers. Caltrain would remain exactly at grade level, eliminating problems such as the viaduct’s interference with quality of life. Unlike a complete closure, all streets would be open for traffic to flow, removing any possibility of redirecting traffic to other streets. Therefore, its chance of success would be the highest by avoiding the unsolvable issues of other options.

Overall, Price’s solution should be gratefully endorsed because it effectively utilizes the true ideal of a compromise. Every Paly student should be endorsing this plan by now, regardless of how they commute to school. Won’t it feel good to finally disregard trains as you casually pass beneath them? Or for bikers, finally escaping the daily obstacle course of trains and cars?

The City Council should also take note of this. Its consultants failed to find successful options after years of brainstorming, only to be offered one by a local resident who used his imagination.

According to the event schedule for Connecting Palo Alto, a community-based process led by the City Council, the next meeting for the Churchill problem originally planned for March 12 at the Paly Haymarket Theater has been cancelled, possibly because of the school’s coronavirus response. No future meetings have been listed currently.

Find out more about the city’s agenda here.

Price’s solution was introduced on Nov. 13, and we are nearing mid-March of 2020. It would be a sigh of relief if they could finally take action and finish before electrification is complete, or else huge problems would arise, even worse than they are now.