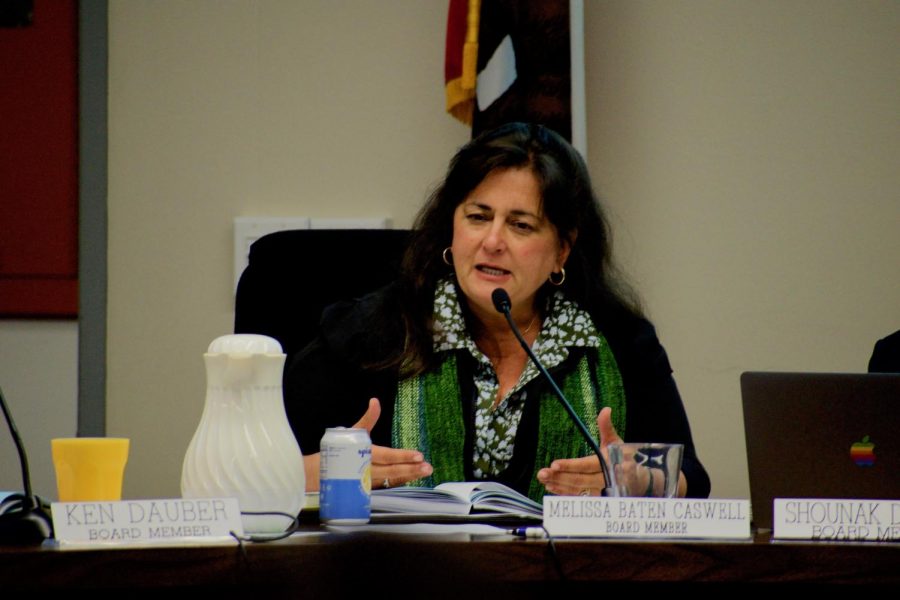 Board Member Melissa Baten Caswell speaks during Tuesday evening's board meeting. At the meeting, the board unanimously voted to endorse Caswell and three others in the California School Boards Association Delegate Assembly election. Photo: Kaahini Jain

The Santa Clara county region has six running candidates for the delegate position. With a maximum of four candidates the Board can endorse, the Board unanimously voted at the Feb. 25 meeting to endorse Melissa Baten Caswell of the Palo Alto Unified School District, Cynthia Chang of Los Altos-Saratoga, Lorena Chavez of East Side Union and Jodi Muirhead of Santa Clara.

Every member of the board is automatically part of the CSBA. According to Caswell, the goal of the CSBA is to drive the California and national public education policy agenda through advocacy with legislatures and providing other training services to its members.

When Caswell first joined the Board, she pushed for more community involved strategic planning as well as more data-based results. She says the district has become more strategically focused over time.

“It can be slow to make change in such a large organization, and we can always improve more, but this has made a big impact,” Caswell said.

Four years ago, in 2016, Caswell was asked to represent PAUSD in the Santa Clara County School Board’s Association.

“[I] realized that I could be an effective spokesperson and advocate for school districts across Santa Clara County and should consider joining the Delegate Assembly,” Caswell said.

Caswell surprised the community in 2016 when she decided to run for a third term on the Palo Alto school board. While there were many theories as to why she made this decision, Caswell said that she ran because, at the time, then-Supt. Max McGee and much of the Board was fairly new and she believed that the district would need a board veteran to support effective policy making, among other things.

“With the superintendent and senior staff turnover since then, it has proven to be a good thing,” Caswell said.

Last year, Caswell was nominated as president of SCCSBA and joined the CSBA delegate assembly.

“I probably most enjoy the opportunity to connect with and learn from school board members across the state, and to help other districts understand the issues we are addressing and the best practices that we have in our region,” Caswell said.

She also enjoys the newsletters and various training sessions that the CSBA provides. According to Caswell, they help her understand school issues and practices that are going on, which helps her be a better board member.

In her first year on the CSBA Delegate Assembly, Caswell focused on issues surrounding special education and funding in the county and state.

In the face of increasing living costs in California, Caswell hopes to continue addressing school funding while rising pension costs and challenges with teacher retention continue. She also wants to focus on initiatives for closing the achievement gap, increasing graduation rates and support academic and social-emotional health.

If reelected in April to serve another two years on the Delegate Assembly, Caswell aspires to continue representing the Santa Clara region so that legislatures can understand how to help schools successfully improve the public education system in California.