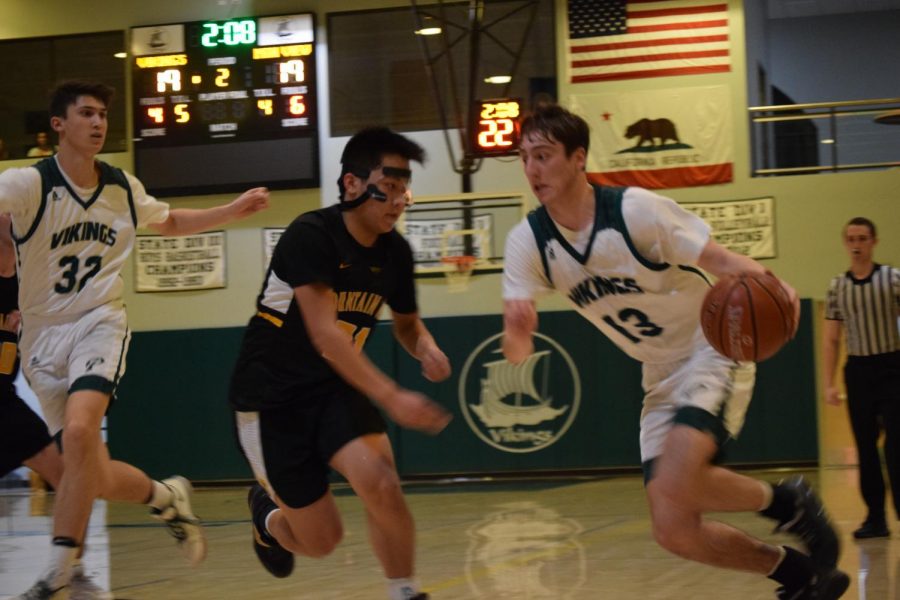 Senior guard Matthew Marzano drives down the court followed by a Mountain View defender. The Vikings won the game by a narrow two points after the Spartans’ buzzer beater three-point shot bounced off the rim. “My basketball career flashed before my eyes,” said Marzano. “I thought I would be done playing basketball if that shot went in, so my heart dropped. I was definitely nervous.” Photo: Arohi Bhattacharya

After going undefeated in league, the Vikings qualified for Division I CCS as the first seed team. The Vikings faced off against Mountain View previously in league games, and, according to Head Coach Jeff LaMere, were prepared for a tough game.

“That team [Mountain View] plays really hard and with 100 percent effort,” LaMere said. “We knew we were gonna have to match their effort, and I’m really proud of our guys, they were able to do that.”

The Vikings started off slow in the first quarter, struggling to maintain possession, while the Spartans, capitalizing on their opportunities, took on an early lead. However, Paly rallied back in the second part of the quarter and strengthened their defense. Senior forward Ryan Purpur, junior guard and forward Aidan Rausch, and senior guard and forward Jamir Shepard scored baskets, ending the quarter 12-10 in favor of the Vikings.

According to LaMere, the Vikings’ demonstrated their grit by playing hard despite the Spartans’ early lead.

“Our perseverance was great,” LaMere said. “To be down ten to one, and come back, and have poise was really tremendous.”

The Vikings and Spartans continued to compete in a close game in the second quarter, with senior guard Matthew Marzano scoring two three-pointers. The Vikings worked together on both offense and defense, passing fluidly around the key and covering Mountain View’s shooters, ending the half leading 24-20.

With all-around exemplary offense and defense in the third quarter, the Vikings began to dominate over the Spartans. Rausch, Purpur, and Shepard secured rebounds and scored baskets from the bottom of the key, while junior guard Andrew Li facilitated ball movement and scored a three-point shot, keeping the Vikings in the lead, 38-25.

According to Rausch, the team’s relationship that has been constructed over the season made an impact on the game.

“I think we have pretty good team chemistry throughout the course of our season, and it’s been improving ever since,” Rausch said. “This game just goes to show that we stuck together and withstood the heat of the other players.”

In the fourth quarter, the Spartans made a strong offensive push, scoring 18 points by slipping the ball through gaps in the Vikings’ defense and staging counterattacks. While unable to shut down Mountain View’s offense, the Vikings fought back with baskets from Purpur, Marzano, and Shepard. Leading by a narrow two points in the last seconds of the game, the Vikings managed to buy time by drawing fouls and ultimately secured the win after a missed 3 pointer buzzer-beater by the Spartans.

According to Marzano, the last moments of the game seemed like they could be the end of the Vikings’ season.

“My basketball career flashed before my eyes,” Marzano said. “I thought I would be done playing basketball if that shot went in, so my heart dropped. I was definitely nervous.”

After winning their semifinal match on Thursday, the Vikings are now in contention for the championship title, and will play in the finals against the Sequoia Ravens at 8 p.m. today at home in the big gym.