Local professionals to present at Career Speaker Series this week 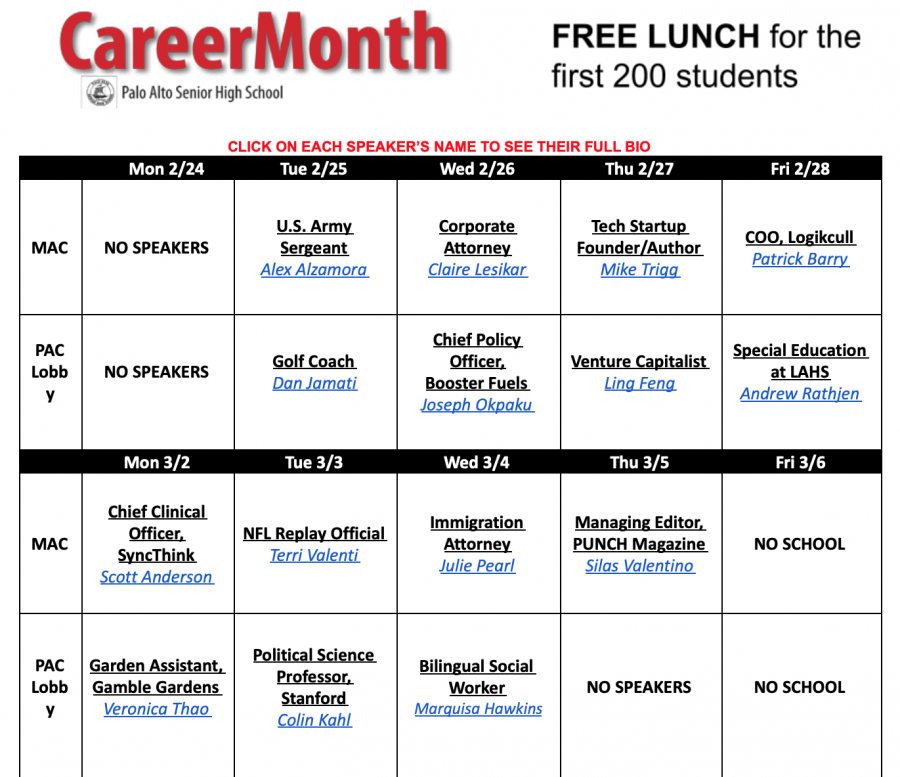 Ever wanted to know what it’s like in a day in the life of an NFL replay official or an immigration attorney? This week is your chance to find out.

Beginning Tuesday, Palo Alto High School students will have the opportunity to hear from presenters at the annual Career Speaker Series, which will feature professionals sharing tales and advice from their lives and jobs.

Seven Paly students, Paly administrators Beth Martin and Karla Larson, and two parent volunteers comprise the Career Speaker Series Committee, which has been hard at work planning the event since October, according to senior Ludovica La Rosa, a committee member. The recently finalized speaker list features representation from many industries, including sports, law, technology, venture capital and education, in addition to many more.

“We try to pick a wide variety of speakers from all different professions and walks of life,” La Rosa stated in a message to The Paly Voice.

Martin, who has been involved in the Career Speaker Series each year since its inception in 2009, said the event was founded with the intent to expose students to the different paths available after high school.

“We hope the students who attend the talks walk away feeling like there are lots of career options and many paths to take to get there,” Martin said.

For the next two weeks at lunch, students can choose between two lunchtime speakers, one in the Media Arts Center and one in the Performing Arts Center lobby. Free lunch will be provided for the first 100 students at each location.

This year’s series kicks off Tuesday with U.S. Army Sergeant Alex Alzamora in the MAC, and golf coach Dan Jamati in the PAC lobby.

A full list of speakers can be found here.