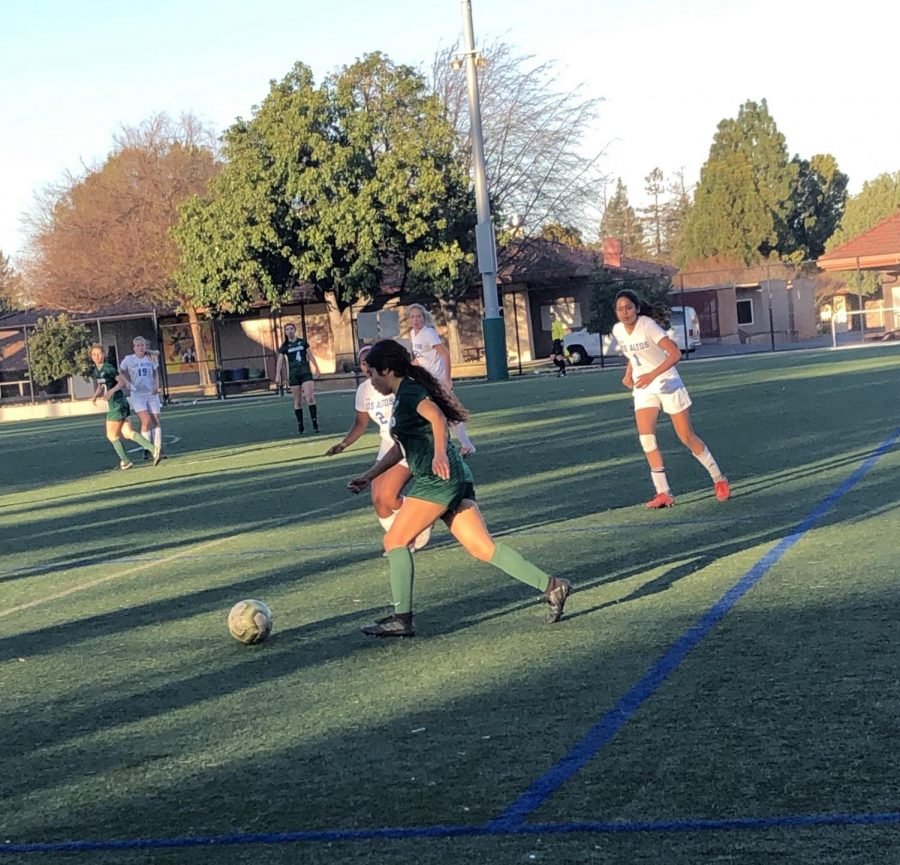 Instead of establishing momentum going into the playoffs, the varsity girls Viking soccer team lost its last league game of the season, 2-0, against Los Altos in a heart-breaking last-minute goal to a team that had lost seven more games than it had won.

While they did lose the game, junior Hailey Hwang says she is satisfied with how they played.

“I’m pretty happy with our performance, ‘Hwang said.’ Obviously we didn’t get the result we wanted, but our team played hard with only 11 players.”

Midway through the first half, Los Altos scored, bringing the score to 0-1. While Paly’s goalie was discouraged because the goal was easy to save but her team was very supportive about it. After the goal, the defenders increased their intensity, making it harder to get another goal in. They kept it up until the last few minutes of the game when another goal was scored.

The last time Paly played Los Altos, Paly won. It was a close game but Paly took a narrow victory with a score of 1-0, so the Vikings were prepared to fight again this time. Having won the last two games they had played against Saratoga and Mountain View,

Paly was improving with its communication and its physicality according to the Head Coach Armando Luna. Luna said he was impressed with the Paly girls’ performance for both games as well.

Luna’s remarks on the Los Altos game were very uplifting as he praised his team for playing its best.

“They (paly girls’) had no subs, and the whole game they played tough all the way, and even played the last 10 minutes of the game with a player down and still kept going at them,” Luna said. “I have nothing but respect for them.”

Near the end of the fourth quarter, sophomore Isabella Jones got injured when she was kicked in the leg and started to get a leg cramp. Not being able to walk on it, she was taken out, leaving Paly a man down. Short one player the Vikings needed to step up their defense. Lots of players were close to scoring a goal but never scored. The Los Altos goalie had many shots against her but kept every one out of the goal.

Soon after in the fourth quarter, sophomore Mariana Kessinger got a yellow card for a foul making her get off the field a few minutes before the game ended, causing Paly to be down yet another player. Not having many players on the field made it easy for Los Altos to score another goal, which happened one minute before the game ended, finalizing the score, 0-2.

Before the game against Menlo yesterday, Luna said he wanted to see a few things out of his team.

“I want to see the same type of energy and intensity, and obviously scoring goals would be nice,” Luna said. “We create chances, but we don’t put them in and then it just makes the game really difficult for us.”

The girls’ soccer teams made their way through CCS, starting with a match against Menlo School at 7 p.m. on Wednesday at Paly. They lost the game so unfortunately, they are out of CCS.