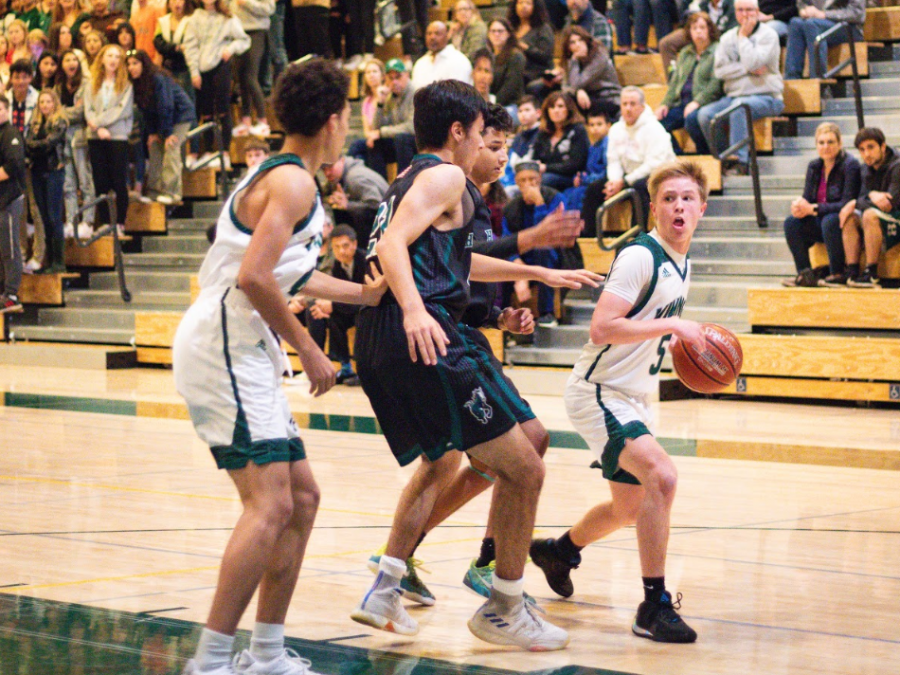 Senior guard Will DeAndre dribbles through Homestead’s defense while looking for a pass. DeAndre is one of six seniors on the team who were honored in a ceremony preceding the Viking’s thrilling 47-33 victory on Friday. “Even though it’s not our last home game it was our time to recognize the seniors, and that’s always a special game,” Head Coach Jeff LaMere said. “It was a really fun game to play and I’m really happy to be able to send our seniors out on the right note.” Photo: Margaret Li

The Vikings are currently undefeated in the Santa Clara Valley Athletic League De Anza Division, but are yet to play three teams in a second game, including Cupertino who they defeated with only a three point lead last time. According to senior guard Matthew Marzano, their success this season is attributed to their defensive strength.

“That [defense] has kind of been our staple of the season,” Marzano said. “We don’t score a ton of points, but the other team scores even less.”

Before the game, the Vikings celebrated the accomplishments and contributions of their six seniors. According to Head Coach Jeff LaMere, the seniors shaped the team through their leadership and hard work, positively influencing the lives of their teammates.

“The seniors have invested so much in this program and have worked so hard,” LaMere said. “They’re really the ones who create the culture of your program, and they’ve done an amazing job. The work ethic they have is tremendous, and they’ve been incredible examples, on and off the court, for the rest of our program.”

In the first quarter, the Viking’s starting lineup was comprised of seniors who worked together to score points, make plays, and shut down Homestead’s offense. Both teams played strong defense, but senior forward Ryan Purpur and junior guard Andrew Li were both able to break through with three-point shots, giving Paly an edge over Homestead and ending the first quarter 11-8.

According to Purpur, after years of playing together, the senior Vikings have become close and play well together.

“We’ve been on a team together for a long time, we’ve played club together, so we have really good chemistry,” Purpur said. “So we’re able to use that and score and do well.”

The Vikings and Mustangs continued to compete in a close game in the second quarter, with Marzano making defensives plays by intercepting passes and recovering rebounds, while senior guard Jamir Shepard and senior forward Elijah Steiner scored baskets. The Vikings faced aggressive play from Homestead, giving Paly multiple free throw opportunities, and ended the half up 21-18.

In the third quarter, the Vikings began to dominate over the Mustangs with an offensive push. Marzano, Li, and junior guard Aidan Rausch scored baskets for the Vikings, while Purpur recovered rebounds to create scoring opportunities.

The Vikings brought heavy defensive pressure in the fourth quarter, working together to shut down the Mustangs’ shooting opportunities, and not yielding a basket for four minutes. Marzano and Rausch both continued to score, securing the win for Paly.

According to Marzano, the team has high hopes for the rest of the season.

“We’re just looking to finish undefeated in league, we’re trying to win league,” Marzano said. “Another goal of ours is to go to the open CCS which is where the eight best teams play bracket play.”

The Vikings play next against the Milpitas Trojans at 7 p.m. Wednesday at Milpitas High School.