‘The Irishman’: A look into 20th century organized crime 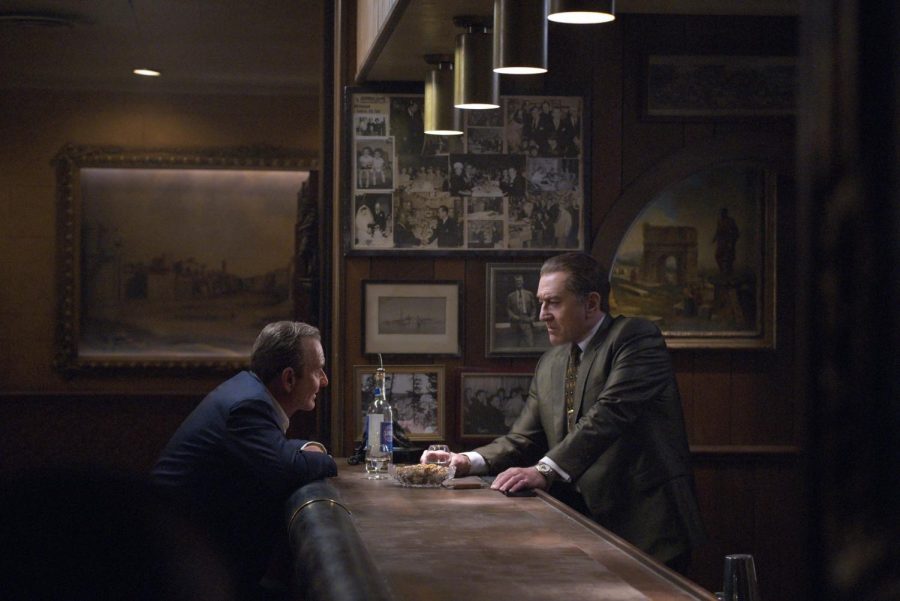 Ever had a friend who was telling you a story, but starts with a long backstory for context, then gets sidetracked by a side story, then introduces too many unnecessary characters, then forgets the point of the story, then finally concludes the story but keeps rambling, three hours and 29 minutes later? Well, that’s “The Irishman” in a nutshell.

In Netflix’s new crime film, Director Martin Scorsese takes the audience on a journey back in time to the mid-1900s. The Irishman, Frank Sheeran (Robert De Niro), is discharged from the army in 1945 and begins working as a truck driver, until he is caught stealing meat shipments. He is later acquitted, and the union lawyer refers him to Russell Bufalino (Joe Pesci), the head of a crime family.

Sheeran quickly rises the ranks, and ends up working for Bufalino and his crime family as a hitman who paints houses — with blood. Well, quickly isn’t the best way to describe it, because the entire progression takes over 45 minutes, and only then is Sheeran finally introduced to the deuteragonist: union leader Jimmy Hoffa (Al Pacino). The bulk of the movie is about Sheeran and Hoffa’s relationship, but even after the main tension between these two characters is resolved, the film maunders on for another 40 minutes, as Sheeran literally repents his sins.

The excessive length is at times problematic, as the timeline becomes difficult to follow, especially since the film tells multiple stories that span over 50 years. It’s so long that it just doesn’t feel satisfying. Perhaps fewer and more condensed scenes, fewer characters and a shorter timeline would have made the film more coherent.

“The Irishman” has been nominated for a total of 10 Oscars, notably for best picture and visual effects due to its extensive use of de-aging techniques. Besides its lengthy runtime, the other aspects of the film are excellent.

The film features over 100 locations shot in over 300 scenes, Variety Magazine reported. It shows. The costume and set designs skillfully portray the era, and doesn’t overlook even the most minute details. Fashion, cars, storefronts and scenes all looked like they are from the late 20th century.

Its clever shots aren’t unnecessarily dramatic and complement the superb acting. The dialogue demonstrates great attention to detail, and in the end, it’s the contrasting personalities of each character that holds it all together.

It’s a decent film. Just know that you’ll be sitting there for a while, so grab a warm blanket and get comfy if you choose to watch it.