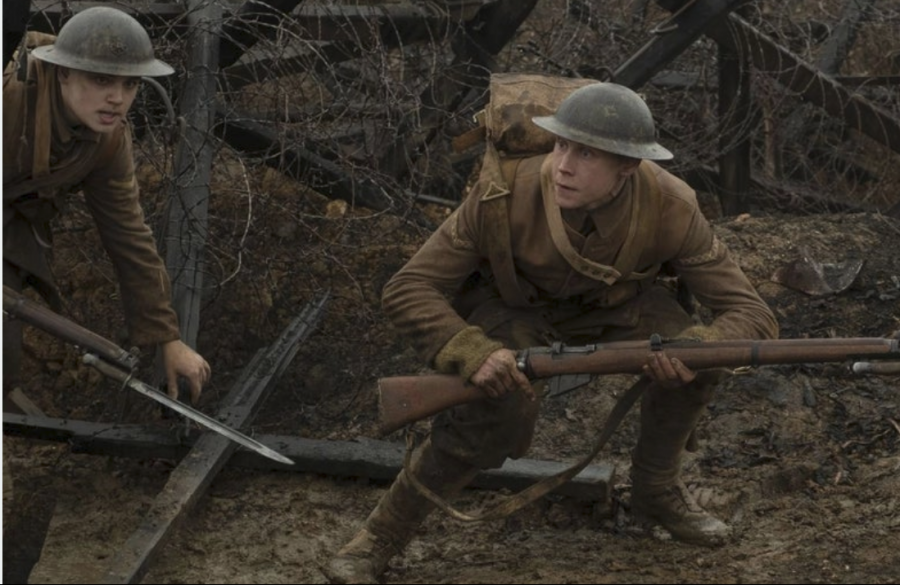 British soldiers Blake ( ) and Schofield ( ) sneak across No Man's Land 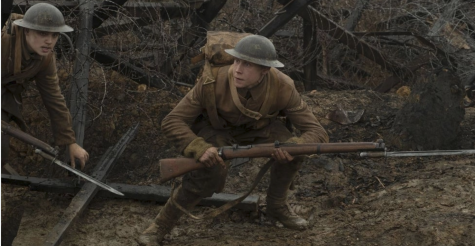 Lance Corporal Blake (Dean-Charles Chapman) and Lance Corporal Schofield (George MacKay) sneak across No Man’s Land while delivering a message that could save 1,600 lives. Appearing as one shot, “1917” follows the brave soldiers’ journey through trenches and German territory and along front lines without cutting away for a moment. Photo: Universal Pictures

Appearing as one shot, “1917,” which is nominated for an Academy Award for Best Picture, provides a somber and engaging take on World War I.

Based on director Sam Mendes’ grandfather’s tales, the movie follows British lance corporals Blake (Dean-Charles Chapman) and Schofield (George MacKay), who are tasked with the mission of delivering a message to call off a baited attack to Col. Mackenzie (Benedict Cumberbatch) in order to save 1,600 lives. The movie follows their harrowing journey across No Man’s Land, through German trenches, and along front lines on their way to the command tent at the battlefield. Along the journey, Blake and Schofield encounter traps, hostile enemy soldiers, a sniper’s nest, and gunfire.

Blake immediately jumps on the mission upon learning his brother is in danger, while Schofield reluctantly accepts, hesitant about traveling across No Man’s Land. Over the course of the movie, both characters develop the same fighting spirit and determination, captured perfectly by Chapman and MacKay who reflect the characters’ attitudes through tone and body language.

The film is nominated for 10 award categories at the 92nd Academy Awards, including Best Picture, Best Director, Best Original Screenplay, and Best Cinematography. It also won awards at the Golden Globes, British Academy of Film and Television Arts, the Directors Guild, and the Producers Guild.

The movie’s biggest accomplishment is in its cinematography, as it appears to have been filmed in one shot, only breaking to a black screen when Schofield is knocked out. Cinematographer Roger Deakins accomplishes the impressive feat by seamlessly transitioning between shots, using barriers, smoke and shadows to disguise the transitions.

This immersive technique made it seem as if the audience never leaves the characters, and is experiencing their journey in real-time. While it can seem like the camera is a third character at times, the one shot theme puts the viewer in the headspace of the characters who could be shot at any moment, allowing the audience to directly experience the action. This helps increase the suspense of the movie and makes it engaging, fluid, and enjoyable to watch.

The movie’s suspenseful soundtrack created a sense of uncertainty and danger throughout the film, reminding the audience that Blake and Schofield’s lives are constantly in jeopardy. The soundtrack also played up the urgency of their mission, emphasizing the fact that the lance corporals had no time to spare and that everything has the potential to go wrong. Every beat drummed out anticipation of a gunshot, keeping the viewer tense and awaiting a deadly encounter.

The setting, while gruesome and nightmarish at times, is intriguing to look at and impressively designed. The barren wasteland of No Man’s Land, riddled with craters, corpses, lines of barbed wire, and the winding trenches filled with soldiers huddled together, make the set design impossible to take your eyes off of. Rundown and destroyed towns and houses create a mysterious environment, amping up the already present suspense.

Not underplaying the horrors of WWI, “1917” shows the futility of trench warfare, the piles of corpses on the battlefield, and the German’s scorched earth policy as they retreated, exhibiting slaughtered animals and destroyed property. The film also shows more disturbing images of rotting corpses, depressed soldiers, and vermin, completing the viewer’s immersion.

While visually appealing and fun to watch, the characters lacked a memorable backstory, creating an emotional detachment between the audience and the characters. All the audience knows about Blake is that he is earnest to go on this mission and save his brother, while Schofield is more hesitant, after surviving a major battle and winning a medal already. This does, however, help give the sense that Blake and Schofield are regular soldiers thrown into a next to impossible mission.

Overall, “1917” is a visual masterpiece and a well-told story, using the impressive one-shot technique to tie together a suspenseful, dramatic story and place the viewer in the action with stoic heroes.

Rated: R for violence, some disturbing images, and language