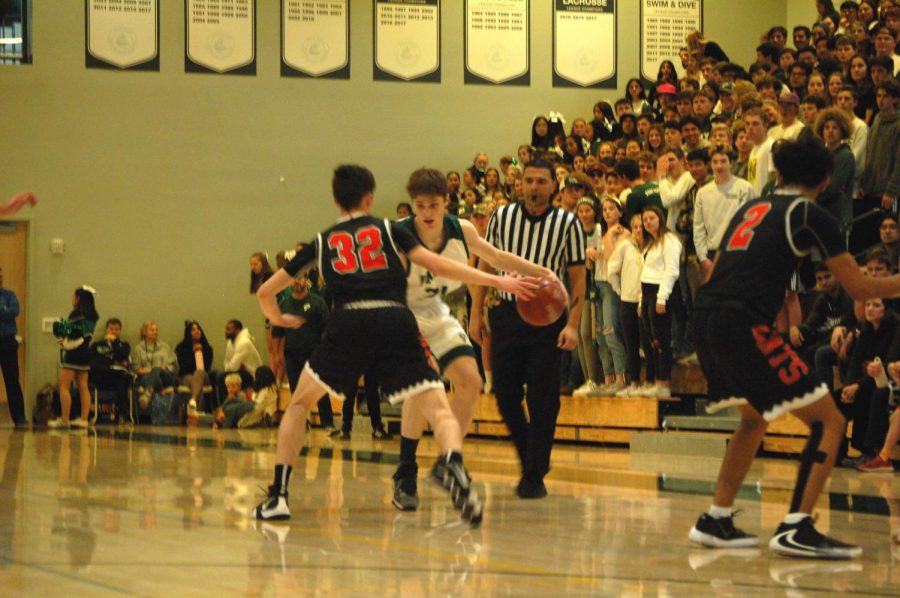 Junior guard and forward Aidan Rausch drive the ball down the court through Los Gatos defenders. The Vikings won the rivalry game, 49-35, by playing an exceptionally strong defense, shutting down Los Gatos’ scoring opportunities. “I thought our strongest point was defense, and one of the things we wanted to do was limit their three point shooters, they have a few guys who are very, very good shooters,” Head Coach Jeff LaMere said. “So one of our points of emphasis was to limit their opportunities … and they did a really wonderful job with that.”

According to Head Coach Jeff LaMere, the Vikings went into the game prepared to play hard and keep a high effort level throughout the whole game.

“As with every game, we approached it with a mentality of playing as hard as we can,” LaMere said. “What we hoped to accomplish this game was to continue to be able to do that, because it’s very difficult to do that game-in and game-out and bring that effort that our guys bring defensively.”

In the first quarter, both teams played strong defense and appeared evenly matched. Senior forward Ryan Purpur was first to score after a foul from Los Gatos over a minute into the game. After that, Paly broke through Los Gatos’ defense several more times with baskets from Purpur and junior guards Andrew Li and Simon Minami, ending the quarter 8-6.

According to Shepard, the team’s offensive performance in this quarter was exceptionally strong.

“This game, in the second quarter, our offense executed more and we started scoring more points than we usually do,” Shepard said.

Despite an offensive push by Los Gatos, Paly maintained the lead in the third quarter. Marzano continued scoring and facilitating ball movement around the court, setting up Minami and Shepard up to score as well.

The Vikings finished the game strong in the fourth quarter, lengthening their lead over Los Gatos, and maintaining a strong defense and offense. Shepard and Purpur staged counter-attacks off of their strong defense, scoring baskets off of rebounds and stolen balls. Marzano, Li, and DeAndre continued setting up plays and making shots, ending the game, 49-35, in favor of the Vikings.

According to Li, the Viking’s stellar defensive game greatly contributed to their win against Los Gatos, and has been a main focus all season.

“I think we played really hard, and throughout the whole year our identity has been playing defense,” Li said. “Even if our shots aren’t falling as long as we play defense we put ourselves in a position to win every game.”