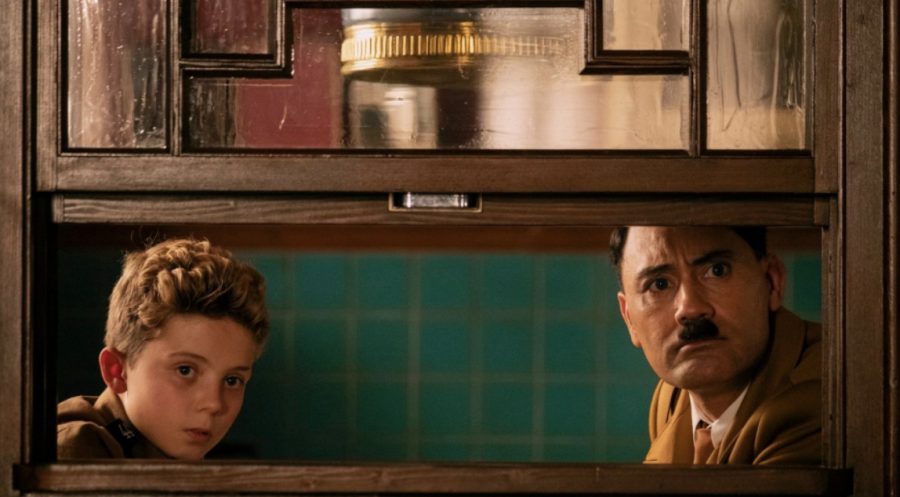 On a Friday night with a bag of candy in one hand and a movie ticket in another, I braced myself for the worst as I sat down to watch Fox Searchlight Pictures’s comedy movie “Jojo Rabbit.”

The movie, which was originally released on Oct. 19, has been nominated for multiple awards in the 92nd Academy Awards, including Best Picture. It follows 10-year-old Jojo Betzler, played by Roman Griffin Davis, in his journey to “manhood” when he joins the Hitler Youth alongside his imaginary friend, who happens to be Adolf Hitler, played by director Taika Waititi. But when Jojo finds out that his Reformist mother Rosie (Scarlett Johansson) is hiding a Jewish girl in their home, he is dumbfounded.

Dumbfounded could also be the word I would use to describe my reaction to the movie. “Jojo Rabbit” is not just another Nazi Germany movie, nor is it really about the Holocaust.

Jojo is a young boy lucky enough to have the influence of his mother and his Jewish roommate Elsa (Thomasin McKenzie), who force him to consider that perhaps war isn’t everything. Yorki (Archie Yates), Jojo’s non-imaginary friend, becomes a soldier at 11 years old and represents what happened to most young boys in this time who were never given the option of anything other than blind patriotism.

The controversy surrounding this movie, and perhaps what fed my initial skepticism, comes down to the humor. A film about a horrible genocide being categorized as a comedy is not only a red flag but a risky move. However, Waititi, whose mother is Jewish, pulls it off elegantly and respectfully in this daring move.

For starters, there are no scenes of concentration camps and there is only one, very brief, mention of Elsa’s parents being taken away to “a place you don’t come back from.” This alone guarantees less criticism and provides a definitive line between what is acceptable for a comedy and what isn’t.

While some may say Elsa’s patience is a stretch, her articulation of the truth about the Holocaust to Jojo allows viewers to empathize with her. Many movies about the Holocaust show hiding Jews but are unable to portray them in a way relatable to the audience, due to the difficulty of the task. “Jojo Rabbit” spreads feelings of pride for Jojo as his view of his country changes, as well as empathy and solidarity for Elsa.

Although there is humor throughout, there are heavier moments as well. After all, it is Nazi Germany.

Along with its other nominations, “Jojo Rabbit” is a contender for costume design. The outfits in the movie were appropriate given the setting, but not outstanding and not unusual. When the characters aren’t wearing military attire, they are in clothes that could be seen on the street today. The film itself is phenomenal and well-deserves its nomination, however, the costumes fail to measure up against competing nominations.

On Feb. 9 “Jojo Rabbit” will compete for Best Picture among other awards in the Oscar Academy Awards. This coming-of-age comedy is well-deserving of the Best Picture award and as I left the theater with an empty bag of candy, my only complaint was the instinctual queasiness in my stomach when the 10-year-old said the F-word (despite it being directed at Hitler).

“Jojo Rabbit” is a daring film that is gracefully performed; it will make you think critically about your beliefs while letting you laugh along the way.