‘Joker’: The study of a man who has lost his mind 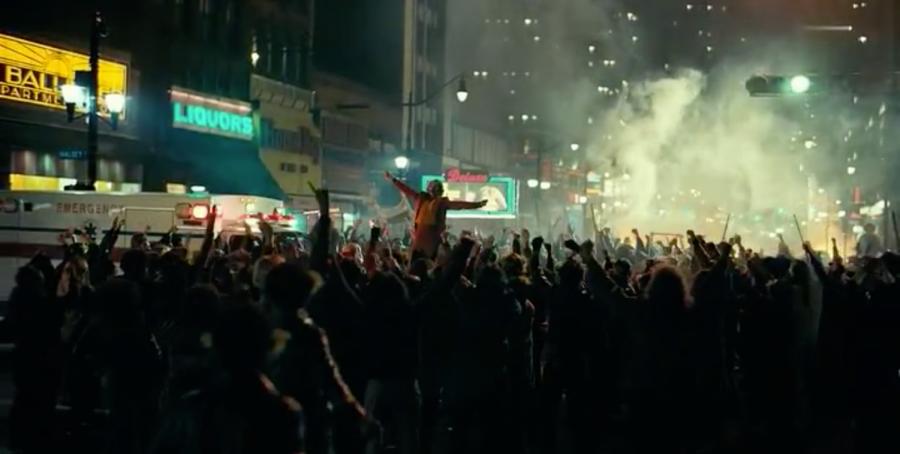 Nominated in 11 categories in the 2020 Academy Awards, Warner Bros. Studio’s “Joker” delves into the past of Batman’s arch-nemesis by tying real trials people face in society to the experience of a man who has gone insane. The movie fights inequality with sporadic and illogical bursts of violence, sending mixed messages about the disparity between rich and poor.

To support himself and his sick mother, Arthur Fleck (Joaquin Phoenix) works as a party clown. Afflicted with a neurological disorder that causes him to laugh uncontrollably, he is frequently labeled as a freak, leading to his isolation from others.

Despite his initial dream of being acknowledged and loved, he is victimized by those more fortunate than him, driving him into madness. After taking the lives of three wealthy men in self-defense, he is crowned by many lower-class citizens of Gotham City as an idol and earns his nickname: Joker.

“Joker” begins with Arthur struggling to maintain his job in the impoverished area of Gotham City, emphasizing the horrible living conditions and the arduous fight for survival that many must endure in their daily lives. However, the movie’s initial message becomes confused: Arthur can satisfy his sick, twisted fantasy by killing those who anger him while the average poor person who feels victimized by society cannot get vengeance on those who wrong them.

The movie’s commentary on the attitudes and values of Gotham’s wealthy is also confusing. Arthur’s delusional mother Penny Fleck (Frances Conroy) informs him that he was a result of an affair between her and Thomas Wayne (Brett Cullen), a wealthy man who supposedly hid his relationship with Arthur’s sick mother. While Wayne is antagonized for lacking a basic level of empathy when Arthur confronts him, we find later on that Arthur’s mother fabricated the affair, and moreover, Arthur’s mother is an insane and negligent parent. The wealthy are portrayed as cold-hearted, frequently ridiculing those beneath them; however, the movie does not offer us a reason why and does not explicitly explore the lives of the wealthy, adding to the confusion.

Throughout the course of the movie, Arthur personally kills a handful of victims; however, each death is slow and gruesome, marking a turning point in Arthur’s search for self-realization by advancing his descent into madness.

The early controversy surrounding the movie claimed that the movie was sending a dangerous message about violence, since the more violent acts Arthur engages in, the more he feels in control. However, this is a loose correlation; after all, this is the origin story of an unhinged and heinous supervillain.

While the violence and social commentary in “Joker” is questionable, this adaptation of the Joker is about the interpretation and exploration of one insane character: Arthur Fleck. Joaquin Phoenix’s phenomenal acting delivers Fleck’s madness directly to the audience through his erratic actions, from chilling, uncontrollable spurts of laughter to climbing into a refrigerator out of the blue.

Including Best Picture and Best Actor, “Joker” is nominated for a total of 11 awards this year. While there are a few aesthetic shots of Arthur looking depressed outside a car or train window, it would be a stretch to say that this movie has phenomenal cinematography. The music, by Hildur Guðnadóttir, is well-adapted to each scene but doesn’t particularly stand out. While Joker’s look is definitely eerie and iconic, the task of costume design for the Joker does not seem to be on the same order of magnitude as it is for other nominations such as Little Women.

“Joker” is not a superhero thriller, not insightful, and has no cinematographic wonder. Instead, it is the study of a man who has lost his mind — at best, some disturbing food for thought.