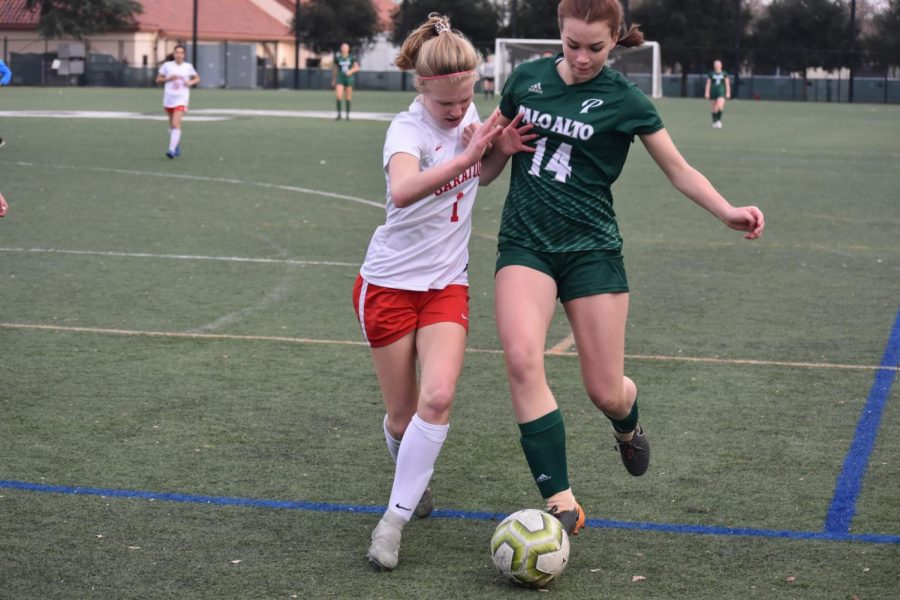 Sophomore captain Bridget Baker and a Saratoga High School defender battle for the ball during a conference game against Saratoga Wednesday at Paly. The Vikings won the match 3-0, marking their first victory of the season in a conference game. “We had the chances the last three games but we weren't able to finish any of them, leading to a 0-0 tie [when] we could have beaten them because we were the dominant team,” Baker said. “We did [finish] this game and it showed a big difference.”

After clinching its first conference-game victory of the season against Saratoga High School Wednesday at Palo Alto High School, the Paly varsity girls’ soccer team hopes to improve its physicality.

Although the game ended in a Viking victory, Head Coach Aramando Luna says he hopes the team can improve its physicality before facing off with more athletic teams.

“These teams that we’ve had success against, they’ve been very similar in level [of] athleticism [as] us,” Luna said. “We’ve had trouble with teams that are a little bit bigger and stronger, so we need to improve in that department.”

Following a 0-0 tie against Santa Clara High School and a 1-6 loss to Los Gatos High School, Paly had yet to win a conference game prior to Wednesday’s match.

“In all those games, we’ve been, in my opinion, the better team, the team creating chances,” Luna said. “We just didn’t convert. It was good to see that we finally broke through and scored more than just a goal.”

This time, the Vikings took advantage of their opportunities. Sophomore forward Mariana Kessinger had a stand out performance, scoring all three of Paly’s goals. Kessinger found the back of the net within the first five minutes. She followed up with two more goals in the second half, making the score 3-0.

“Every day [over Winter Break] I was training from 7:30 to 11:30 [a.m.] practicing shooting, and that really helped my finishing,” Kessinger said.

Although time was running out in the second half, Paly did not let up. The Vikings took significantly more shots than their opponent during the last 15 minutes of the game.

“I’ve been in games [where] we’ve been up 4-0 and lost in the last 10 minutes, so we have to play every second of the game,” Kessinger said.

The Vikings will face off against Homestead High School at 3:30 p.m. Friday at Homestead.