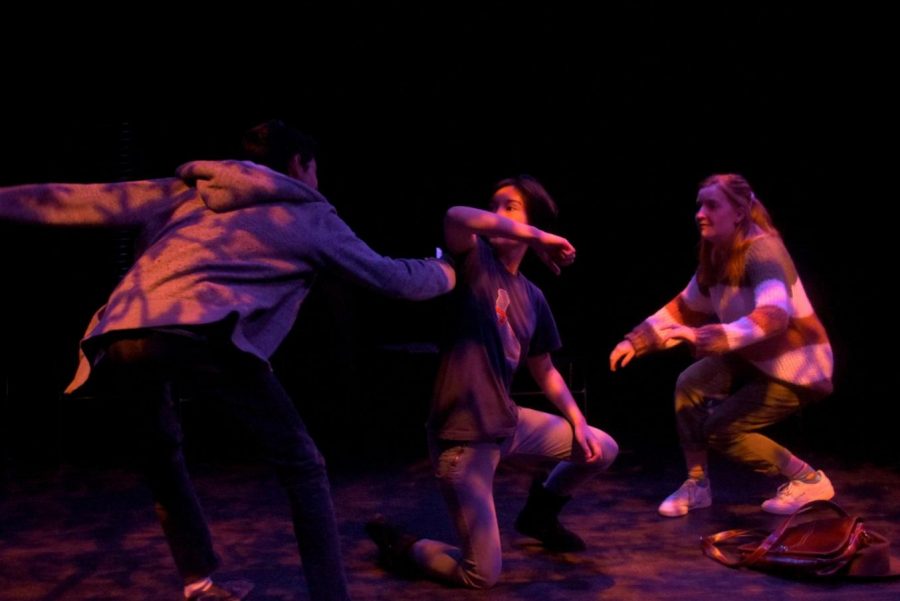 The one-act show centers on the relationship between southern belle Mary Anne Rowan, played by sophomore Anneke Salvadori, and Kentucky newcomer J.T. Wells, played by senior Aida Mohamed, who dazzles the Rowans with his tales of city life.

“The Kentucky Cycle” is the second Paly show to take place in the theater classroom, which has been transformed into a black box theater, instead of on the main PAC stage. Audience members surround the performance space on three sides, allowing for a more immersive experience. Last September, “The 25th Annual Putnam County Spelling Bee” became the first Paly production to be featured in the black box theater.

“It [the black box theater] automatically makes everything so much more intimate, because you’re so much closer to the actors and on the same level,” said senior Sky Croce, who is the student director. “In a show like “The Kentucky Cycle,” which is very dramatic, it makes everything a lot more intense and brings out the drama and the emotion a lot more than seeing it on [the main] stage would.”

According to Croce, working in the black box presented new challenges for student directors.

“You can’t have a scene where the actors are all looking one direction, because the audience just sees their backs the whole time,” Croce said. “So it has to be constantly moving and having the actors change where they’re looking, which is not what you would do on a regular basis.”

However, working in the black box theater also presents novel opportunities for theater students, according to senior Harriet Baldwin, who is the student producer for “The Kentucky Cycle.”

“We weren’t really using all of this space in the PAC to its full potential until this year,” Baldwin said. “The black box … allows kids to get a lot more experience and knowledge in different settings and kinds of ways to work in a theater, which helps you to learn about more of the professional world.”

“It lets you have a smaller cast size without feeling empty; for Spelling Bee, we only had nine actors,” Baldwin said. “On the main stage, that would have felt really empty, but here it was really full and it just felt much more vibrant.”

Showtimes for “The Kentucky Cycle” are 7:30 p.m. on Friday, Jan. 17 and 2:30 p.m. on Saturday, Jan. 18 in the Performing Arts Center theater classroom. Tickets are $5 and will be sold online and at the door. More information can be found here.