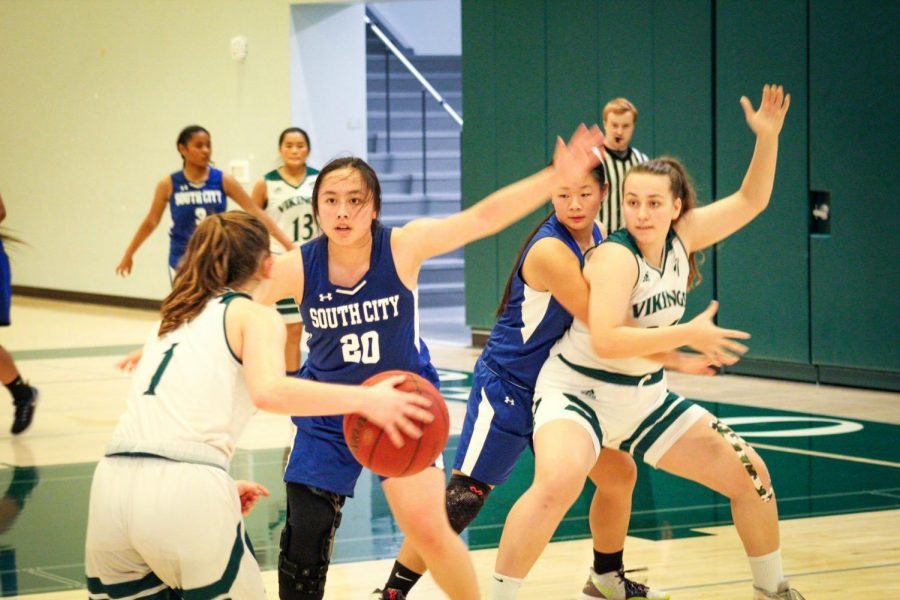 The Palo Alto High School girls’ varsity basketball team kicks off its season with a victory against South San Francisco High School Thursday at Paly and aims to carry that momentum into league.

“Since this was the first real game, we all put our heads together and just played,” junior small forward Elif Turgut said. “It was a collaborative effort.”

The Vikings were initially slow to score. With less than five minutes remaining in the first quarter, a basket from sophomore power forward Thea Enache put the Vikings on the scoreboard and from there, the pace of the game accelerated. In the first quarter, Paly scored 14 points, with 11 from Martin, and South San Francisco scored 7.

The Vikings continued their momentum throughout the second quarter with five points from freshman point guard Kaella Peters and six points from Turgut, ending the half with a score of 27–12. Paly scored 28 points in the second half while the Warriors scored 21.

Although Martin was a force on offense, scoring 23 of the Vikings’ 55 points, she credits the team’s success to its aggressive defense.

“We’re talking on defense more, boxing out, getting rebounds,” Martin said. “And that helps us with offense. Defense comes first.”

Head Coach Scott Peters said that the team’s energy on and off the court helped it come out on top.

“The bench— it was bringing energy to the game,” Peters said. “We want to play with a sense of joy whether we’re up 10 or down 10.”

Paly has won the Santa Clara Valley Athletic League De Anza Division five years in a row, and Peters hopes this season will be no exception.

“Our goal is to have a team that is together and supports each other and works hard for a common goal to get better,” Peters said. “Every year also our goal is to win league.“

The Vikings will play Aragon High School next at 7:30 p.m. Tuesday at Aragon.