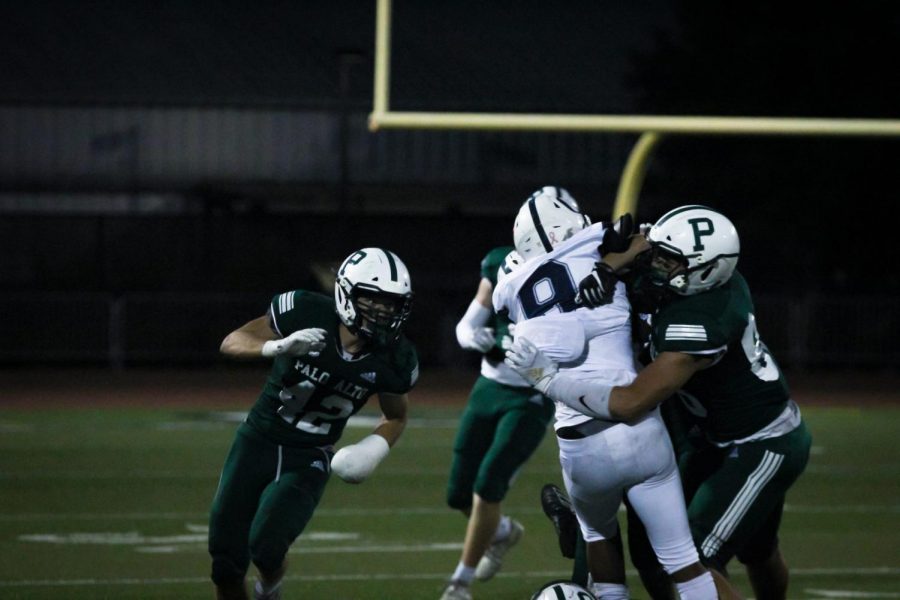 The Palo Alto High School football team (6-4, 3-3) is preparing for its first game in Division 2 of the California Interscholastic Federation Central Coast Section tonight in an away game against the Palma High School Chieftains (7-2, 5-1), after a tough 7-17 loss for the Vikings against the Milpitas Trojans (4-6, 3-3) last week.

The Vikings will use their loss from last week as motivation in tonight’s game, says senior defensive end and defensive tackle Bryon Escarsega-Calderon.

“The loss in general to us is a motivation because none of us like losing,” Escarsega-Calderon said. “Even though it’s hard taking a loss, we still bounce back to come out stronger.”

According to sophomore running back Josh Butler, the team is mainly focusing on improving its defense for this week’s game.

“The team we will play [Palma] has a great offense, so we will focus very much on perfecting our defensive strategies this week to get an edge,” Butler said.

Other than perfecting its defense, the team is keeping many of their preparation strategies constant, according to Head Coach Nelson Gifford.

“We focus on the same thing every week, which is just evaluations, reflection, and then focusing on improvement,” Gifford said. “So our approach this week isn’t any different than what we do every other week.”

The team faces another ongoing challenge: injured players. Senior defensive end and tight end Louis Passarello was injured last week, and not able to play during this week’s game, and senior guard and tackle Alberto Ruiz has not been able to play for a few games. Despite there already being players with injuries, and the likelihood of there being more, the rest of the team has to constantly be ready to play, according to Butler.

“When one man goes down, there’s another to fill his spot,” Butler said. “The mindset for the game is if your number gets called, be ready because it is going to happen more often than not.”

Escarsega-Calderon has faith that the team will be able to overcome obstacles.

“We know we lost a lot of key people last week,” Escarsega-Calderon said. “But I believe in our group and our coaching staff that we will be able to go in there [the game] as strong as we can.”

The Vikings will face-off against the Palma Chieftains at 7 p.m. tonight at the Rabobank Stadium in Salinas.